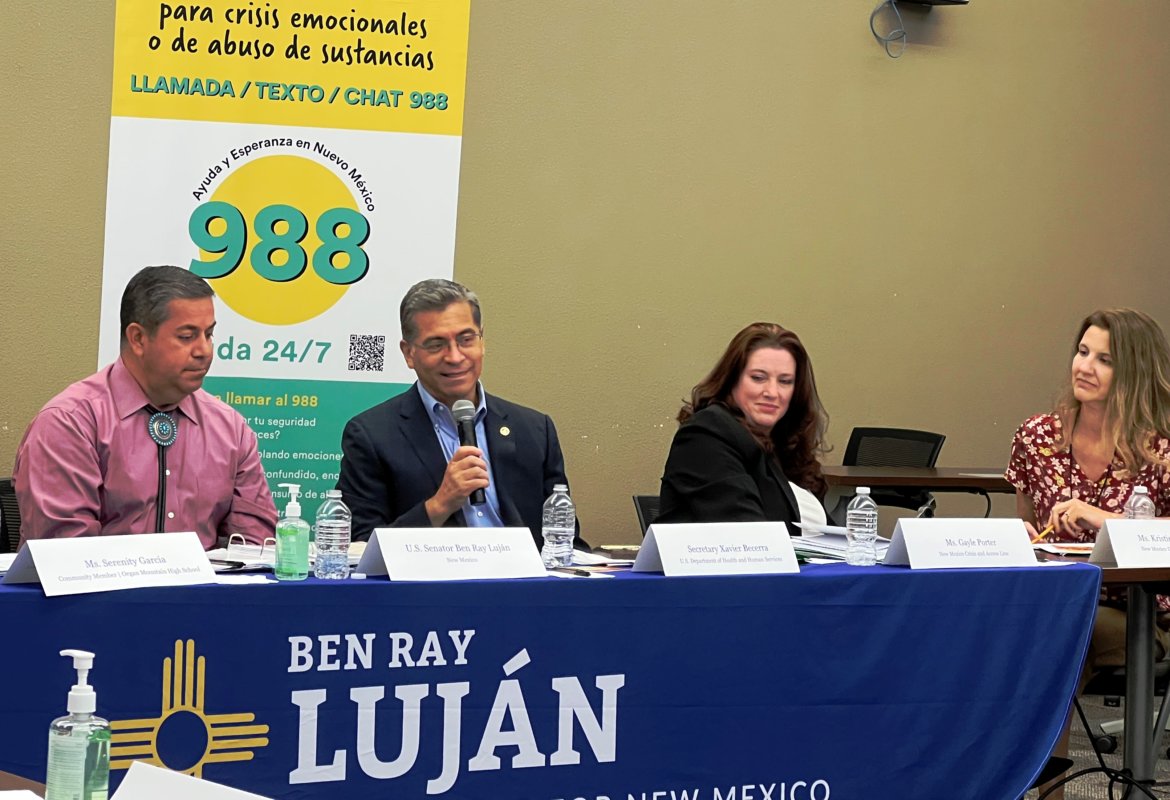 Luján and Becerra both made general remarks but mostly listened to the local professionals talk about challenges they see facing youth in New Mexico. Dan Green, the state survey epidemiologist supervisor, said that according to 2019 data, 40.4 percent of New Mexico children experience persistent feelings of sadness or hopelessness. He said that is higher than national trends.

According to the 2019 data, 50.7 percent of girls in New Mexico were likely to experience sadness or hopelessness compared to 30.3 percent of New Mexico boys.

Green said more recent data has not come out yet due to the COVID-19 pandemic’s impacts on data gathering and research. But he said preliminary information indicates the trends in New Mexico’s high rate of depression among children are “going in the same direction” as before.

“The sadness and hopelessness trend is going up,” he said.

Green said one area where money needs to be focused is on children who are marginalized such as those who face homelessness, LGBTQ youth and students with disabilities. He said that of the 5.2 percent of New Mexico children experiencing homelessness or housing instability, the rate of heroin use is 30 times higher than for children living in stable housing.

“We need financial support for School-Based Health Clinics for operational needs. We ask our nonprofit partners to develop innovative and bold solutions for behavioral health without a long-term commitment. Children need space to grow and learn,” she said.

Kristin Oreskovich, SBHC program clinical operations manager for New Mexico Department of Health Office of School and Adolescent Health, said every county in New Mexico has shortages for both primary care doctors and behavioral health professionals. She said high poverty rates and a lower percentage of vehicle access creates a high social vulnerability in every county.

Other issues for New Mexico children include stigma, payment related issues such as high co-pays or a lack of providers who accept Medicaid, a lack of child and adolescent substance use treatment centers and immigration status issues.

“Kids in New Mexico have a lot of anxiety,” she said.

She added that some positive trends include an increase in telehealth and mobile health due to the pandemic.

In June the U.S. Congress passed the Bipartisan Safer Communities Act of 2022 in response to the school shooting in Uvalde, Texas, that killed 19 students and two teachers. President Joe Biden signed it into law the same month. Among other things, the law allocates $11 billion for mental health services which includes grants available to increase school-based mental health services. U.S. Senator Martin Heinrich, also a Democrat, was one of 20 senators who formed a bipartisan working group that reached an agreement on the bill’s framework.

At the end of the roundtable, Mayor Pro-Tem Kasandra Gandara presented Becerra with keys to the City of Las Cruces.

Becerra said during his brief remarks that Congress has “given us more money than we’ve ever had for mental health.” But he also said “we don’t have enough money.”

Luján, who suffered a stroke earlier this year, said one thing he learned from that experience was when not feeling okay, the best approach is to seek medical help.

“If there’s anything I learned from having a stroke six months ago, it’s if you don’t feel well, you don’t try to sleep it off. You go see the professionals,” he said.

Becerra emphasized the importance of recognizing a mental health problem and admitting it. He said the message used to be that if someone was “hurting, suck it up.”

“It’s okay to not be okay and that’s what we want folks to know,” he said.