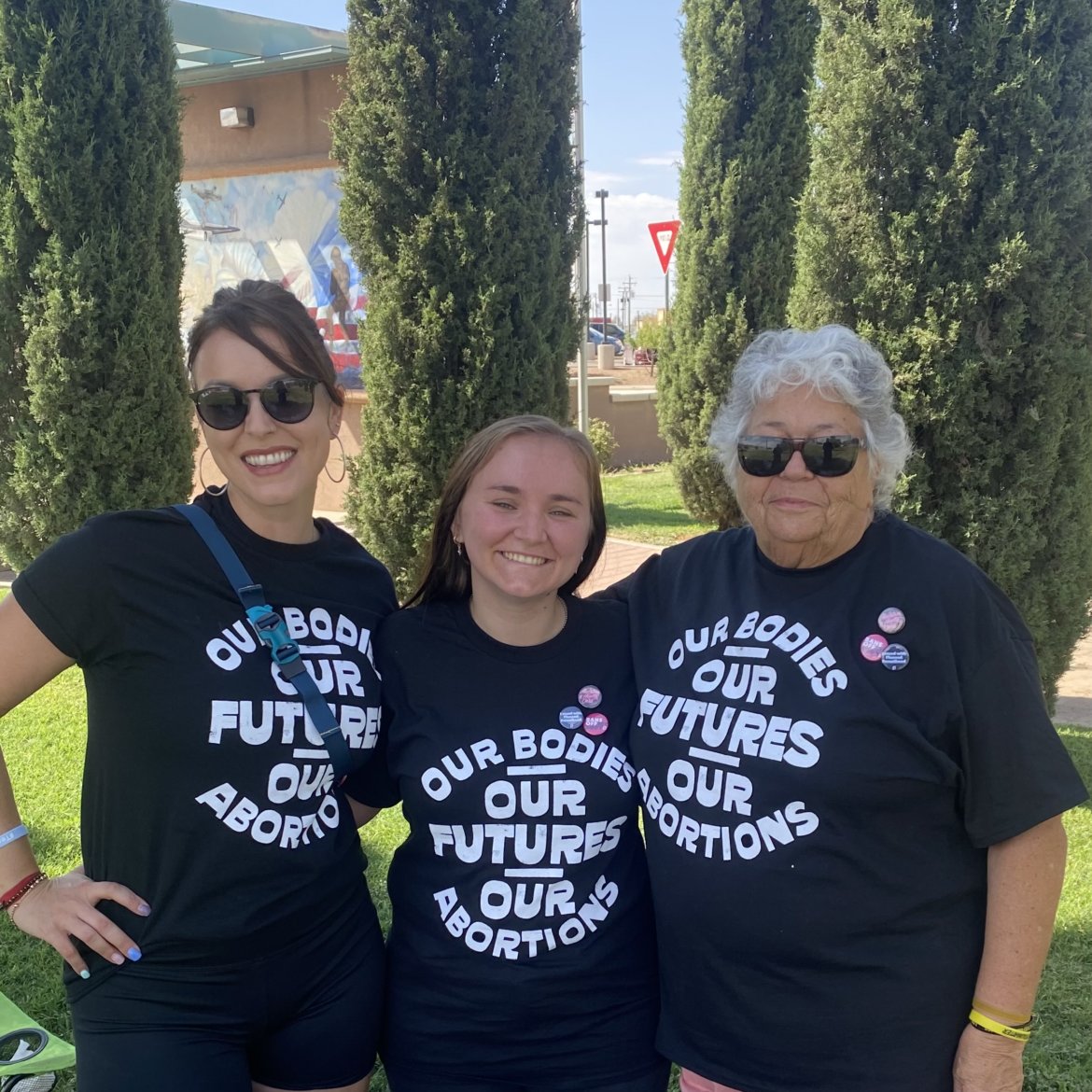 The fall of Roe v. Wade in June led three women to form a reproductive rights group in Otero County.

Natalie Wilkins, Shari Adkisson and Marylouise Kuti forged New Voices Otero in response to the leak of the U.S. Supreme Court draft document of its Dobbs v. Jackson Women’s Healthcare decision in May as an offshoot of their initial protest activity. Despite the potential for backlash, they told NM Political Report they believe being vocal is important on issues such as reproductive rights but, also, already looking ahead, on social justice issues as they move forward.

New Voices Otero spoke out against the resolutions passed by both the Otero County Commission and Alamogordo City Council in July to designate both the county and the city as “sanctuaries for the unborn.” Anti-abortion activists have said such designations are one of the initial steps which could, over the course of years, alter the political climate of the state so New Mexico could become a state where abortion would no longer be legal.

“In our viewpoint, there were more people there [at the Alamogordo City Council meeting] saying no over the people saying yes. That made us feel completely unheard,” Adkisson said.

Who are the founders

Wilkins said part of what motivates her is that she didn’t feel she could be honest about who she is with people she used to be close to.

“I was sick and tired of letting everyone else tell me what to think. I can’t sit back anymore, especially for my kids,” Wilkins said.

Kuti is motivated, in part, because she was a young mother and felt shame around her unexpected pregnancy as a teenager, she said. She founded #noteenshame, a social media movement to bring awareness to young parenting.

“Sexual and reproductive advocacy is possible without shaming those who do chose to parent or chose abortion or adoption. There should be agency and autonomy in decision making,” she said.

Adkisson said she has been a long-time activist. She said being an older individual is part of what motivates her.

“I’m going to stand up and say what I want to say. I’m trying to get others to do that, more and more, I say, ‘do this. I can work with you on that. We have to get a petition going.’ I’m glad to have an outlet to voice concerns,” she said.

Otero County has historically been one of the strongest Republican strongholds in the state. But Kuti said she believes the climate of the county is shifting.

“We are an inclusive, military, transient community. We have so many people from all over the world. We want everyone to feel welcome.”

Kuti said a priority for the group is to be a space for community members who “don’t feel safe.” Adkisson said being a voice for people who feel they can’t speak up is also important.

“There’s been a Republican majority [in Otero County] for 40 years,” Adkisson said. “Even the moderates and liberals have no places to be heard. That’s why we call it New Voices to bring out voices that haven’t been heard in years.”

Some issues the three brought up that they are already interested in tackling, beyond reproductive rights, include the crime rate, kids living in poverty, community policing and safety, food scarcity, the lack of drug treatment facilities, LGBTQ+ rights and inclusivity, education and more resources for young parents.

Wilkins said wanting children to feel safe in Alamogordo and Otero County is also a concern.

“I see kids on a daily basis who are not comfortable being themselves because of other[s]…who are hateful toward them,” she said.

The three, who say they have additional members, also feel that living in a place so close to the Texas state line, where abortion is banned, lends urgency to their work.

“Small local areas are the foundation of an entire community. People don’t realize their rights in small communities; they don’t realize they can advocate for themselves and what happens here matters,” Wilkins said. “We’re getting an influx of patients because of [abortion] bans. If an abortion clinic needs to open here, that’s not a bad thing.”

The three said that, despite the conservative reputation of their area, they have heard from individuals who agree with them who have been afraid to speak out.