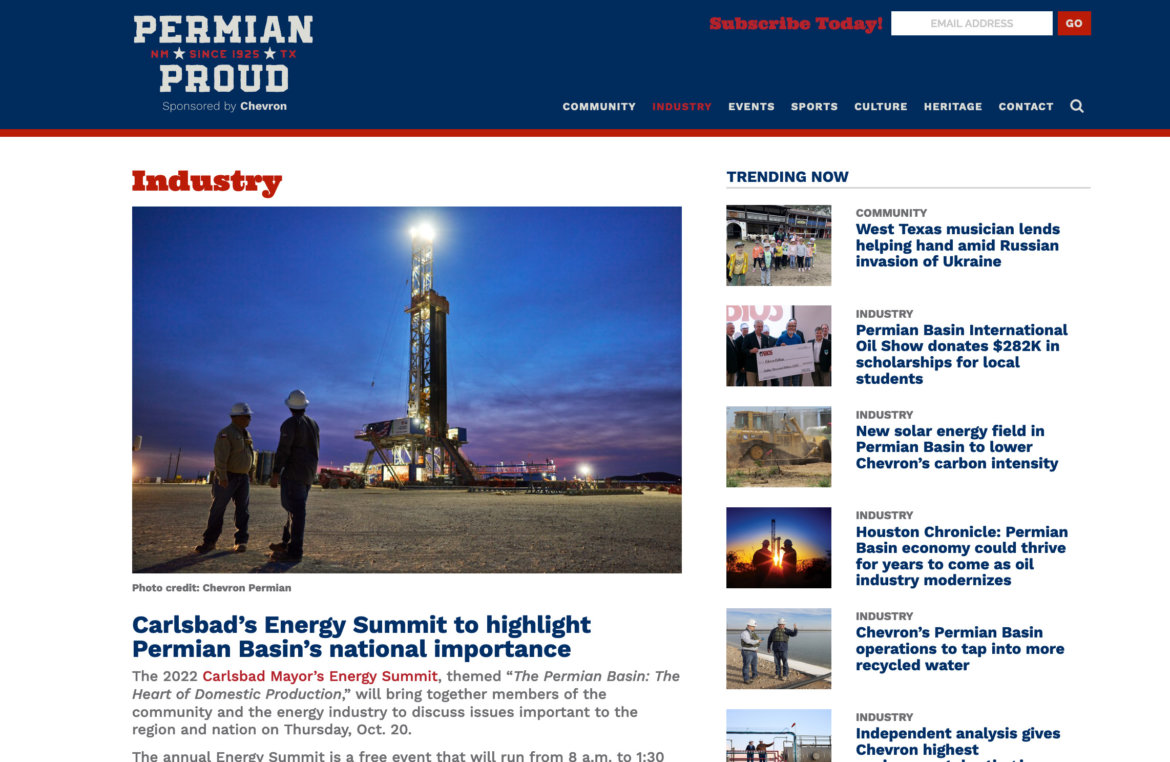 A screen shot of the website Permian Proud, recently launched by Chevron.

All of this money sloshing around the state raises the positive public profile of the petroleum industry. Meanwhile, the public sees little of its state Legislature — but that doesn’t mean it’s not busy.

After work at their day jobs and on weekends, legislators are defining and refining the measures — many dealing directly or indirectly with the oil and gas industry — that they plan to bring before the next legislative session. And when the state’s volunteer Legislature eventually returns to session in January, it will have to contend with an industry that spent the previous 11 months burnishing its image in ways that unpaid, part-time public servants simply can’t.

“That PR piece has always been a center of the work of extractive industries,” says Angelica Rubio, state representative from Doña Ana County. She grew up in the Permian Basin, home to the largest oil and gas play on the planet, and she remembers how companies paid for scholarships and sports fields at her high school. “It’s kind of like, ‘OK, while we’re poisoning your water, we’re gonna go ahead and pay for this football field,’” she says.

The scope and tone of the current PR blitz covers the gamut from — literally — hot air to cold cash.

Early in the year, ExxonMobil became the prime sponsor of the Albuquerque International Balloon Fiesta, one of the state’s signature tourist draws. The company also ponied up to be a corporate backer of New Mexico United, the state’s wildly popular soccer team. (ExxonMobil’s subsidiary XTO was already a sponsor.) The deal is likely smaller than its sponsorship agreements with the NBA and WNBA, but it brings ExxonMobil name recognition in the stadium and company-branded soccer training camps for kids around the state.

Not everyone is happy with the deal. A United fan club began a campaign to get the team to dump ExxonMobil as a sponsor. The company didn’t respond to calls about its sponsorships, and NM United wouldn’t say how much the company paid for its high visibility patronage, but ExxonMobil does want to highlight its “renewable efforts,” according to United’s Chief Business Officer Ron Patel, “as that becomes more mainstream.”

In the spring, Chevron became the top sponsor of the New Mexico State Fair, another of the state’s biggest draws, to the tune of $250,000 a year for the next three years. By comparison, a single Chevron lobbyist spent over $1 million on political donations around the state since 2020.

This summer, Chevron, Oxy and ConocoPhillips donated hundreds of thousands of dollars to relief funds in the aftermath of the Calf Canyon/Hermits Peak wildfire — the largest in state history. While the fire started as a prescribed burn intentionally ignited by the U.S. Forest Service, the federal government’s own study concluded that fossil fuel-driven climate change made it historically catastrophic. In that report, the Forest Service chief also said that climate change had rendered the agency’s firefighting playbook obsolete.

The local promotional and governmental windfalls burnish the reputation of an industry whose global image took a beating over the same period. World gas and other fuel prices spiked following the Russian invasion of Ukraine, and have remained elevated even as some underlying supply issues ease and individual energy companies post quarterly profits larger than New Mexico’s annual budget.

And then there’s the constant global drumbeat of climate catastrophes, from heat waves to floods to drought to hurricanes. All the while, industry money puts pressure on the state’s unpaid, part-time legislators, who once again will be proposing and debating bills to further supervise and regulate these same companies.

“These are miniscule amounts of money for the companies to do their unlimited amounts of public relations here in the state,” says Jeff Steinborn, a state senator from Las Cruces. And it’s public messaging that the Legislature will have to address anew when it finally starts its own deliberations — deliberations often over how to regulate the state’s most profitable industry, deliberations paid for in large part by oil and gas revenues.

“This is a leadership moment where there are real-world negative consequences of us not investing in a professional legislature,” Steinborn says.

Companies and industries are able to hire and fund full-time lobbyists who essentially end up competing with the state’s part-time, unpaid Legislature, and “It really, really gives deference to paid interest groups and lobbyists who have an outsized voice and muscle in setting the table on what gets worked on,” he says.

And the year-round oil industry publicity also worries legislators, not because they think the companies shouldn’t be allowed to advertise — “That’s certainly their right,” Steinborn says – but because the structure of the Legislature itself makes it hard for politicians to get their own work in front of the public in equal measure in the political off-season, which makes part of any legislative session a game of catch-up.

“What they’re doing is really attracting the media in ways that we just can’t,” says state Sen. Antoinette Sedillo López. “I don’t have a publicist. I’m not a publicist,” she says. “I don’t do press releases.”

Sedillo López’s district is in Albuquerque, the state’s largest city and the home of the State Fair, New Mexico United and the Balloon Fiesta. In her four sessions at the Legislature, she has proposed a half-dozen bills to regulate aspects of the oil and gas industry, from banning fracking to limiting how produced water can be used, to a constitutional “Green Amendment” that would give New Mexicans the right to a clean environment. They all died, while prompting the New Mexico Oil and Gas Association to launch an online campaign against her.

For part-time, unpaid legislators, New Mexico’s political schedule amplifies the publicity problem as it switches between one- and two-month sessions every other year. No one thinks that’s enough time to properly debate important legislation — including questions about how to fix the Legislature itself. In fact, Rubio says, “It seems like we’re only in session really once every two years, because the 30-day session is usually awash with the budget.”

Following this past January’s 30-day session, Rubio teamed up with other representatives to figure out a new way forward. They pooled discretionary funds to pay for a study on legislators’ thoughts on how to reform state government, and that led to a new constitutional amendment to provide salaries to legislators, allowing them to literally pay attention to the state’s business. “And that will be introduced in January,” Rubio says.

“It’s a really huge institutional problem we have that’s in crucial need of reform,” Steinborn says. Time and money will allow New Mexico’s politicians to better debate legislation “and not give that deference to the paid guns.”

In addition to the overt advertising campaigns, Chevron has started Permian Proud, a website aimed at the Permian Basin in Texas and New Mexico to spread “news and information that makes us all proud to live here.” Deena McMullen, a spokesperson for Chevron, wouldn’t provide even basic information about the site, saying only that the company has hired “a writer/editor who develops organic regional content for the platform and will share relevant Chevron content.” She also said that the company has “ensured that the platform is sustainable for years to come.”

In New Mexico’s part of the Permian Basin, Permian Proud competes against the Carlsbad Current-Argus, the Alamogordo Daily News and the Ruidoso News, all run by News Director Jessica Onsurez. “Any company is going to work hard to try to put their brand in a positive light,” Onsurez says of Chevron’s foray into the publishing world. “But there should never be a blurring of the line between what is journalism and what is public relations.” So far, much of Permian Pride’s content consists of news of fundraisers and concert schedules and feel-good business stories about Chevron.

“Given how we are struggling in journalism to really retain trust,” she says, “it seems almost as if there is a perfect environment to try their hand at selling PR as legitimate news.”

Onsurez grew up in the Permian Basin, and people in the region know her. “My phone number, my email address, is everywhere,” she says. People also know the three reporters she has covering stories in those three towns. “Our reporters live in this community. They own homes here.” But her papers’ parent company Gannett, the nation’s largest newspaper owner, was acquired in 2019 by a private equity firm that proceeded to slash positions in newsrooms around the country. Onsurez’s papers dodged the most recent round of layoffs earlier this year that took out 400 jobs at other Gannett properties.

“Our industry has always struggled with helping people understand why journalism is important,” Onsurez said. “But I always hope that anybody who is uploading information is smart enough to ask the question about where it’s coming from.”