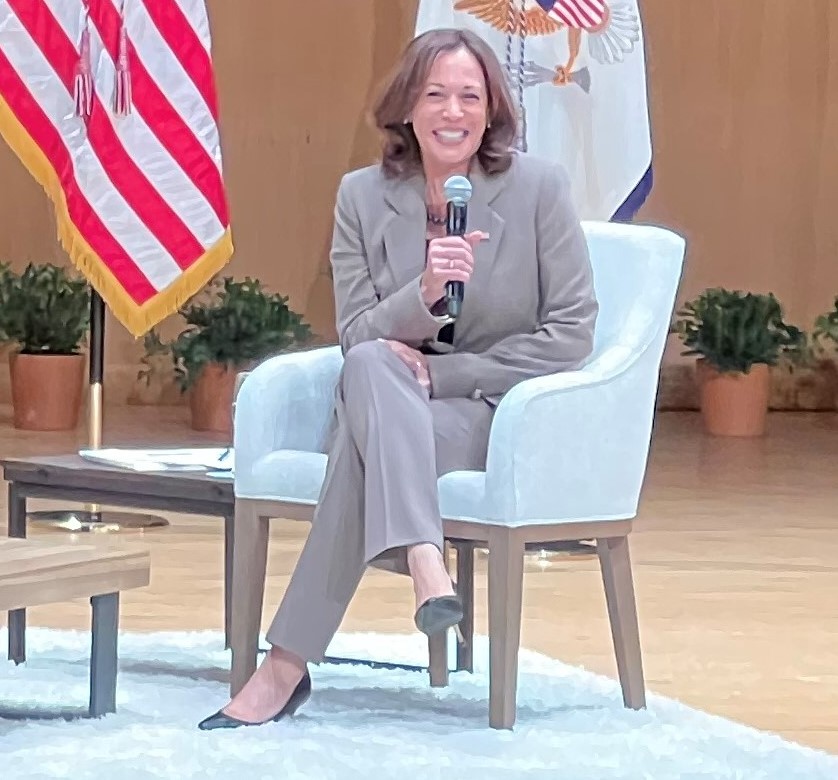 Vice President Kamala Harris said during an event in New Mexico on Tuesday that the fight around reproductive rights in the United States will affect women all over the world.

Harris stopped in Albuquerque to talk with Governor Michelle Lujan Grisham and University of New Mexico Professor and Chair of the Department of Obstetrics and Gynecology and Family Planning Fellowship Director Dr. Eve Espey about protecting reproductive rights. The moderated discussion took place in front of a packed house of about 250 people at the University of New Mexico’s Keller Hall in the Center for the Arts and Arts Museum.

“My fear on this issue is that dictators around the world will say to their people who are fighting for rights, ‘you want to hold out America as the example?’ Look at what they just did; be quiet,’” she said. “I highlight the significance of this moment and the impact, which not only directly impacts the people of our nation but very likely impacts people around the world.”

Harris highlighted her mother’s career, saying that her mother was one of the very few women of color researching breast cancer in her era. Harris said she grew up hearing about disparities in the health care system, particularly for women of color.

“Often it has nothing to do whatsoever with socioeconomic levels. Literally, it has to do with, she walks into that emergency room and is not taken seriously,” Harris said.

Harris said there is a proposal in the U.S. Senate to require health care providers to take racial bias training. Harris gave a shout out to doulas, who she said are often the best individuals to provide racial training. She said she is working with the U.S. Secretary of Labor on the issue that doulas should be paid better.

“Whatever gains we make, they will not be permanent. It’s the nature of it,” she said.

Harris also talked about the confusion that comes when some states protect abortion rights while others legislate against it. She held up a map with different colors for states with different laws, as some states have banned abortion at conception while other states have instituted gestational bans. Some states that have banned abortion allow for some exceptions and some do not. Even the exceptions can vary as some states require that the victim report a rape or incest to the police but some do not.

“It’s her decision to report to police not their [lawmaker’s] decision. It really is outrageous,” Harris said.

Harris said that such a variety of laws leads to confusion, which in turn promotes disinformation, misinformation and predatory behavior.

Lujan Grisham and Espy asked Harris questions through the nearly 40-minute discussion. Espy asked about what happens to the field of abortion if universities are not allowed to teach abortion care in states where the procedure is banned.

“How do we support current providers and ensure a pipeline? We’re really worried about that in New Mexico,” Espey said.

Harris said the Biden Administration is talking to universities that have endowments that can take students and spoke of professors volunteering to travel to other states. She said the U.S. Department of Justice is convening pro bono legal services.

“Here we are in 2022. We need lawyers for doctors who go from one state to another,” she said.

Espey said health care providers in New Mexico have been harassed and intimidated even despite being in a state that is “supportive and unique” and has “a great coalition that wants to continue to provide that care.”

Espey said the Dobbs decision, in which the U.S. Supreme Court overturned Roe v. Wade this past summer, has had “a chilling effect.”

“What are you going to do to protect us?” Espey asked.

Harris said that “moments like this reveal the heroes among us.”

She said the Biden administration has sent edicts to hospitals regarding the responsibility of emergency care, informed pharmacists that they cannot discriminate against people when dispensing medication. She said the DOJ has created a task force to work with local communities about threats and violations of law and that the DOJ has set up a hotline to report threats.

Harris spoke of New Mexico as a “sanctuary” state because it has kept abortion legal and providers in this state have absorbed abortion patients from states where it is banned.

Others who spoke ahead of Harris, briefly, included Albuquerque Mayor Tim Keller, U.S. House Representative Melanie Stansbury, who represents New Mexico’s 1st Congressional District, Senator Ben Ray Luján as well as officials from the U.S. Department of Health and Human Services. Several Legislators attended and Lujan Grisham called them out, asking them to stand. She also called out Lt. Gov. Howie Morales and Secretary of State Maggie Toulouse Oliver, who were also in attendance.

Lujan Grisham spoke before Harris took the stage and highlighted her own record on abortion, citing the repeal of the antiquated abortion ban the Legislature passed in 2021 and the two executive orders she issued this summer. One protects providers and patients from prosecution in other states or inquiries into patient records. The other provides $10 million to help build a reproductive health care facility in Las Cruces, which is 45 miles from the state line with Texas.

Harris pointed out that under Lujan Grisham’s leadership, state Medicaid extended post-partum care to 12 months instead of two months.

“So if we think about the unique stressors impacting well-being during pregnancy. Access to transportation, housing, consistent and permanent housing, nutrition. All of these things. Let’s commit as a society to this issue, which we must. We have to address all of these issues,” she said.