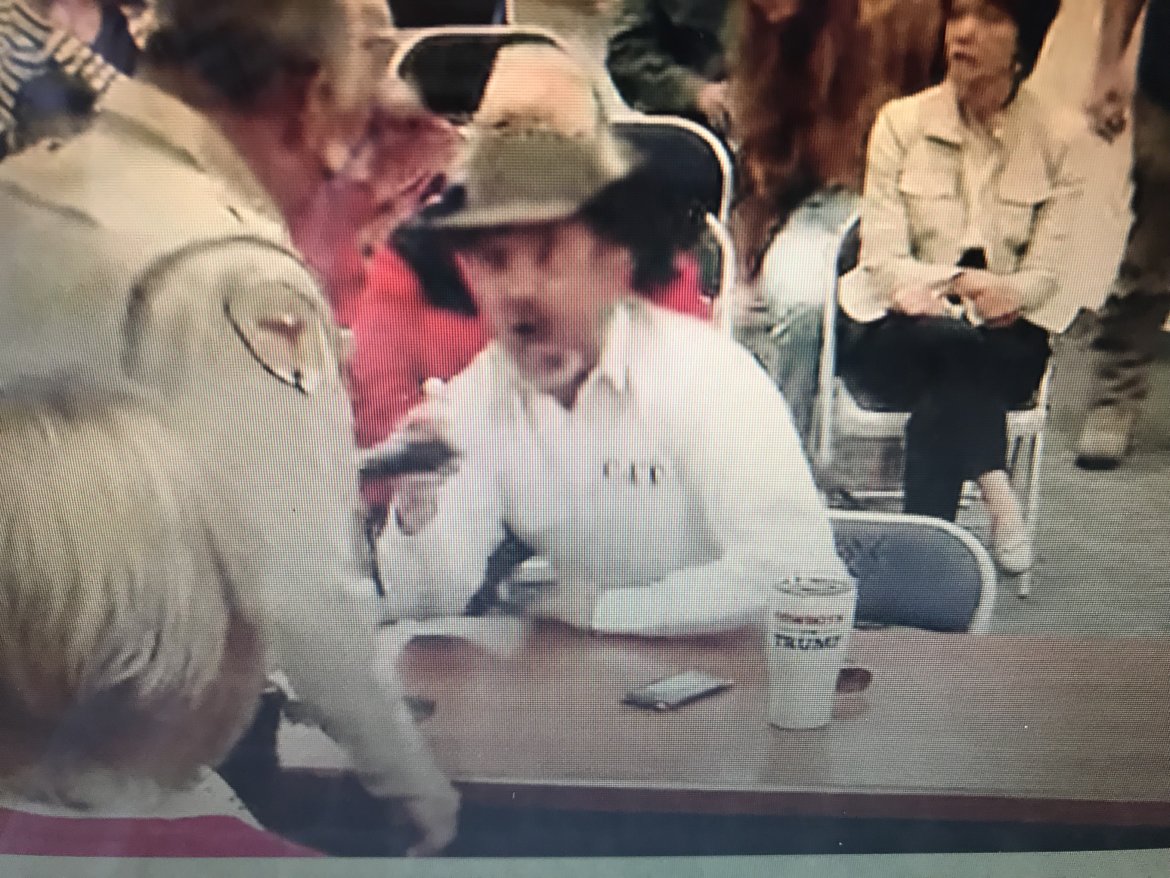 Griffin was unhappy that Stephanie DuBois, a Democrat, was appointed to his old seat after Griffin was removed from office based on the U.S. Constitution’s 14th Amendment’s Disqualification Clause after his conviction related to his role in the Jan. 6, 2021 insurrection in Washington, D.C.

DuBois deemed Griffin’s rant as a verbal assault and is in the process of filing a restraining order against Griffin.

“Couy Griffin, duly elected and legitimate county commissioner of District 2 as well as founder of Cowboys for Trump and I’d like to just start out by saying looking up here at you Stephanie (DuBois) in that seat is a total disgrace,” Griffin declared.

Griffin said that he felt DuBois’ appointment was disgraceful because she has run for office in Otero County eight times including in last week’s election and has lost each time.

DuBois interjected and Griffin said that “I’m talking right now. This is not a conversation.”

DuBois urged Griffin to stop his attack on her but he continued calling her a disgrace and a loser.

DuBois said that she felt like she was being publicly violated while the public were cheering on her attacker.

“The governor appoints a loser into this seat, somebody who has…,” Griffin said trailing off.

“I am not a loser!” DuBois said over the crowd which was getting louder the longer Griffin spoke.

The gallery had people on both sides of the Griffin issue.

DuBois said that she reached out to the New Mexico Attorney General’s Office to report Otero County Sheriff David Black for inaction during the meeting.

DuBois claims that Black smirked at her when she asked Black to remove Griffin for his alleged verbal assault on her.

Griffin was frequently in the news during his tenure as an Otero County Commissioner.

In July 2020, Griffin denounced the use of the Black National Anthem, “Lift Every Voice and Sing” at national sporting events and urged those who supported it that they could “go back to Africa” in a Facebook Live video.

Griffin said that he would need more time for his public comment since he was “being interrupted too much.”

DuBois told Griffin to “shut up” while he opined that Gov. Michelle Lujan Grisham had appointed DuBois “out of spite.”

While Griffin was saying this, DuBois said, “But I am not a criminal, you are.”

On Monday, DuBois said that she has not spoken to Lujan Grisham since her appointment.

Griffin responded that DuBois was not a voice for Otero County but a “radical progressive loser Democrat.” Griffin emphasized the word “loser.”

He also claimed that DuBois was one of the people behind the effort to recall Griffin following his actions at the Jan. 6, 2021 Capitol insurrection. DuBois vehemently denied having any part in the recall effort.

The recall petition failed to garner enough signatures to trigger a recall election.

Otero County Commission Chairwoman Vickie Marquardt told Griffin that he had made his point but Griffin continued in the same way with DuBois saying that she would not be abused.

Otero County Commission Vice Chairman Gerald Matherly then picked up the gavel and banged it in an attempt to achieve order.

Griffin then continued talking while Marquardt called his name and then ordered the room cleared as the room erupted in chaos.

At one point, before the meeting livestream went dark, Sheriff David Black, a Republican who ran unopposed in the 2022 election, took the microphone from the public comment table away from Griffin who said “well now, you get tough. Now you’re a tough guy, huh?” to Black.

The meeting livestream went dark for about 10 minutes before the meeting reconvened.

“We’re going to go ahead and continue but I am asking you right now that we keep this civil,” Marquardt said when the meeting reconvened. “We’re all godly people here and we need to keep that in mind. And you all haven’t seen me ride in on my broom yet, but it was about there this morning. We’re going to keep this civil.”

Griffin was given three more minutes to continue his comments.

“I appreciate you letting me finish, Vickie, as you say we are all people of God,” Griffin said in a calmer tone of voice than how he began his comments initially.

He restarted his tirade against DuBois’ appointment calling the district court ruling that disqualified him from office “fraudulent.”.

Griffin continued his comments claiming Mathew did not have jurisdiction to remove Griffin from office. Couy claimed Otero County Attorney R.B. Nichols sided with the federal government and from getting what Griffin calls “bad” advice from outside sources.

As Griffin’s comment time wound down, he apologized to DuBois.

“Stephanie, I’m sorry. Maybe you felt a little bit of a burn that I felt the last three years up there because this is the way that y’all have treated me,” Griffin said. “I’m sorry if you took it personally Stephanie. I like you and I didn’t mean it personally.”

“It was meant personally,” DuBois responded.

The gallery erupted as a local Democrat Matt Crecelius, who had stood up and was walking around the county commission meeting room, was asked to leave for being disruptive.

Marquardt asked Black to escort Crecelius out of the room.

“I think you need to go outside and cool off for a little bit, Matt,” Marquardt said. “You’ve been standing up doing your hand signals and I’m over it.”

Crecelius accused the commission of a double standard as Griffin could stay but Crecelius could not.

Griffin was arrested, charged and later convicted of a federal trespassing charge for his actions on January 6, 2021.

Griffin climbed a temporary barrier to get to a place above the crowd where he used a bullhorn to lead the people in prayer and, at one point, yelled “heave ho!” during the crowd’s breach of the Capitol.

Griffin was removed from office in September based on the Disqualification Clause in the U.S. Constitution’s 14th Amendment which disqualifies elected officials who participated in an insurrection. The amendment dates back to the post-Civil War era and has only been used once.

Marquardt and Matherly have not responded to requests for comment.