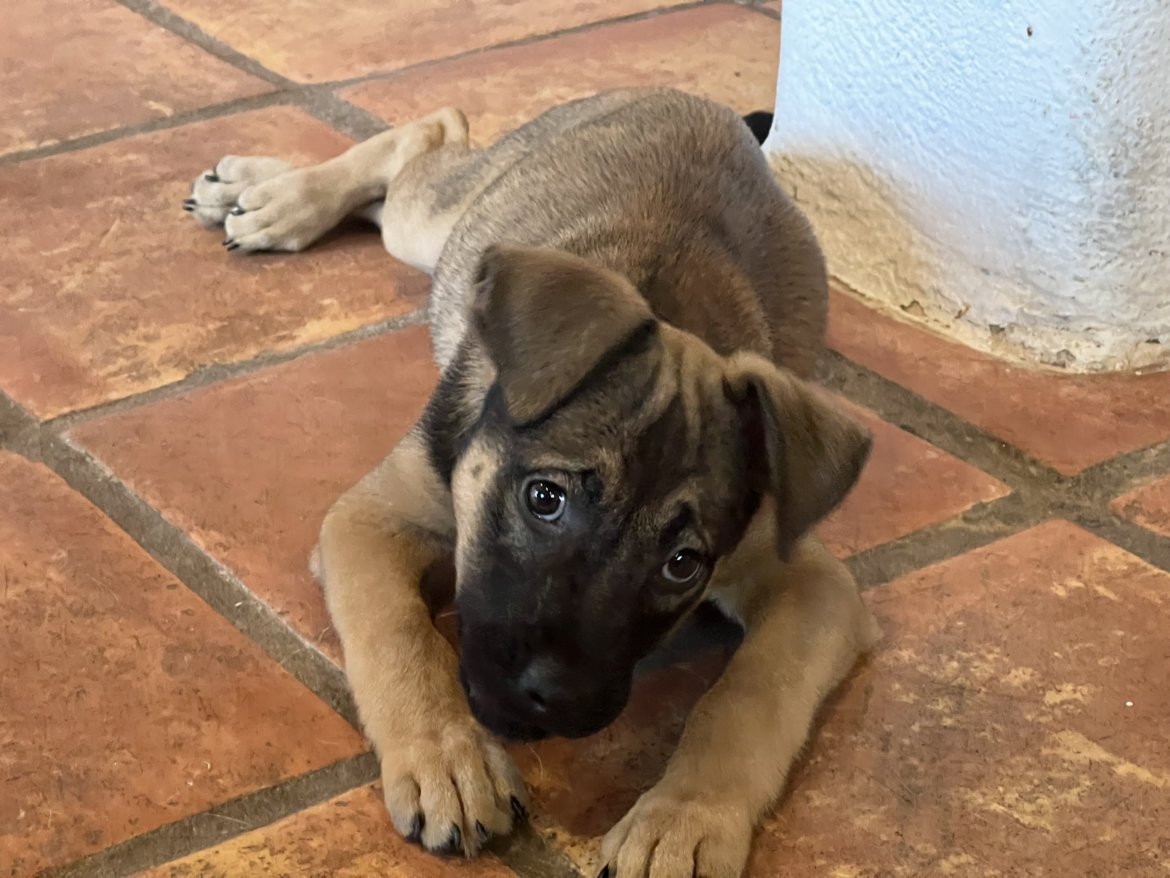 A recent rescue from Animal Service Center of Mesilla Valley.

Albuquerque Animal shelter anticipates 21,500 pets will have come through their two city-run shelters in 2022 by the end of the year. Prior to the COVID-19 pandemic, the Albuquerque shelters saw 17,000 to 18,000 pets arrive annually.

Animal shelters across the country continue to be in a state of crisis. In the early days of the COVID-19 pandemic, more people than usual visited their local shelters in both New Mexico and nationwide. People adopted pets in response to stay-in-place orders, remote working and schooling and, some have said, out of a sense of compassion for the animals when the world seemed upside down. But in the early days of the pandemic, veterinarian services including spaying and neutering were curtailed, which led to a pet population explosion. By 2021, animal shelters in New Mexico and elsewhere began reporting crisis level intakes with decreased adopters and fostering availability. Some said the decrease in adopters and fosters could have been because of the increase in adoptions and fosters in 2020 creating a leveling out period in 2021.

But now at the end of 2022, animal shelters are reporting that the crisis continues with an increase in pet intakes and a decrease in adopters and fostering. Carolyn Ortega, director of animal welfare at the Albuquerque Animal Welfare Department, said some pets have been at the Albuquerque shelter for six months to a year.

The reasons for the increase in intakes vary. Ortega cited high inflation as a primary cause.

“Our surrenders have really gone up significantly. When they do surrender, we ask why and so many people have said it’s because of the economy. They are downsizing, moving from homes to apartments or in with family members or becoming homeless. We’re seeing more people who really do care about their pets not having the financial ability to care for them,” Ortega said.

Jack Hagerman, chief executive officer of Santa Fe Animal Shelter, said another problem is that the Santa Fe shelter has “a lot of large, undersocialized animals that are not as desirable.”

“Larger dogs are harder to place. Housing is very difficult in Santa Fe. A lot we need to place would do well with a yard. Some people don’t have a yard and can’t take a dog for walks three or four times a day. Part of the crisis is that the ones that need homes are not as easily marketable to the demographic of Santa Fe. Their length of stay goes up,” he said.

The longer an animal, particularly a dog, remains in a shelter environment, the more they are likely to develop emotional and behavioral problems. That can decrease their odds for adoption and for retention once adopted. Hagerman told NM Political Report that the Santa Fe shelter recently had a pet resident who had been at the shelter for two years.

“We had a long-term resident for two years we finally got out recently. Everyone is crossing their fingers it sticks. Even though, when we finally get a unicorn adopter, no one is fully sure it will be really successful. The longer the length of stay, the greater the return,” Hagerman said.

Hagerman said most adopters expect a short-term period of adjustment, but some shelter animals have deeply rooted psychological issues and “need a good six to nine months to address those issues.”

Hagerman said “we spend a lot of time painting the picture of the wonderful care animals receive in the shelter.”

“It’s true. But that doesn’t change the fact that they’re institutionalized. For animals, it’s a traumatic event even if just for a day. If they’re in a heightened state of arousal long enough, behavior will change. Just like humans. If you keep a human incarcerated long enough and then put that person out in the world and expect them to be successful, it doesn’t really work that way,” he said.

Although both the Santa Fe shelter and the Albuquerque shelter are defined as no-kill, the shelters do, normally, euthanize 5 percent and 10 percent of their animal population respectively on an annual basis in a normal year. A no-kill shelter is defined as one where 90 percent of the animals that enter are adopted. But Ortega said the euthanization rate has increased due to the crisis.

Ortega said the Albuquerque shelter is now around an 85 percent rate of live release.

“We’re not proud of that. We know that other shelters have had a much larger drop [in live release percentages]. We’ve maintained it because of our process of how we get to that point; that has kept us at a reasonable difference. Others have seen a big spike,” she said.

Hagerman said the Santa Fe shelter has maintained its 95 percent live release rate but he doesn’t know how long that will be sustainable.

We’re in it for the animals in our care. We want the very best for them. Sometimes what is best for them is not being in our shelter for a very long time,” he said.

Hagerman said he would like to rethink how shelters are viewed as a way to combat the problem.

“What we know through research is that 75 percent of people surrendering are not because of a behavior issue or because they don’t want the pet. They have acute resource issues and can’t care for their pet responsibly anymore,” he said.

The model Hagerman is trying to move to is one where individuals who surrender a pet talk to the shelter to talk about the problem. If the individual is surrendering due to a lack of resources, the shelter can help through a pet food bank, veterinarian services, providing low or no cost spay or neutering or vaccinations. Hagerman said he hopes to reduce the number of animal surrenders by half by helping individuals and families keep their pets. Hagerman estimates that with resource help, 50 percent of the animals surrendered wouldn’t have to be.

“Then the animals coming to the shelter are the ones that absolutely need to be there,” he said.

Another crisis occurring, partly in response to the pandemic, is a veterinarian shortage, which Hagerman and Ortega both said is acute. Hagerman said the problem is multifold, with the baby boomer generation hitting retirement and not enough individuals replacing them in the field, in addition to the pandemic affecting those still in the profession who no longer want to work long hours.

Veternarians have the highest suicide rates of any industry, Hagerman said.

Hagerman said the crisis in the field is also affecting adoptions. He said he is seeing an increase in pet surrenders who are injured or have chronic health problems.

“During the pandemic, the interest in adoptions went way up when everyone was at home. Lots of animals go to homes, that’s really good news for us. The community really rose up to meet us with that challenge. Now, a lot more animals are in need of primary vet care and there are not as many vets. People are struggling to get an appointment, the cost for care is going way up. Now maybe they can’t pay for that really expensive orthopedic procedure, so they surrender at the shelter because they can’t afford to pay for that,” Hagerman said.

Inflation is affecting the shelters, too. Hagerman said he will have to raise an additional $1 million because his budget has gone up. He is looking at trying to request public money for the shelter. He also said he has had to raise worker salaries to try to keep up with retail jobs that pay more and are easier to do.

Ortega also cited a worker shortage as another problem that is plaguing the Albuquerque shelter and its ability to provide quality care to the animals. She said shelter workers are experiencing what she called “compassion fatigue” because they see no end in sight to surrenders while the shelter is overcrowded. She said, currently, the Albuquerque shelter has about 950 pets waiting to find loving homes.