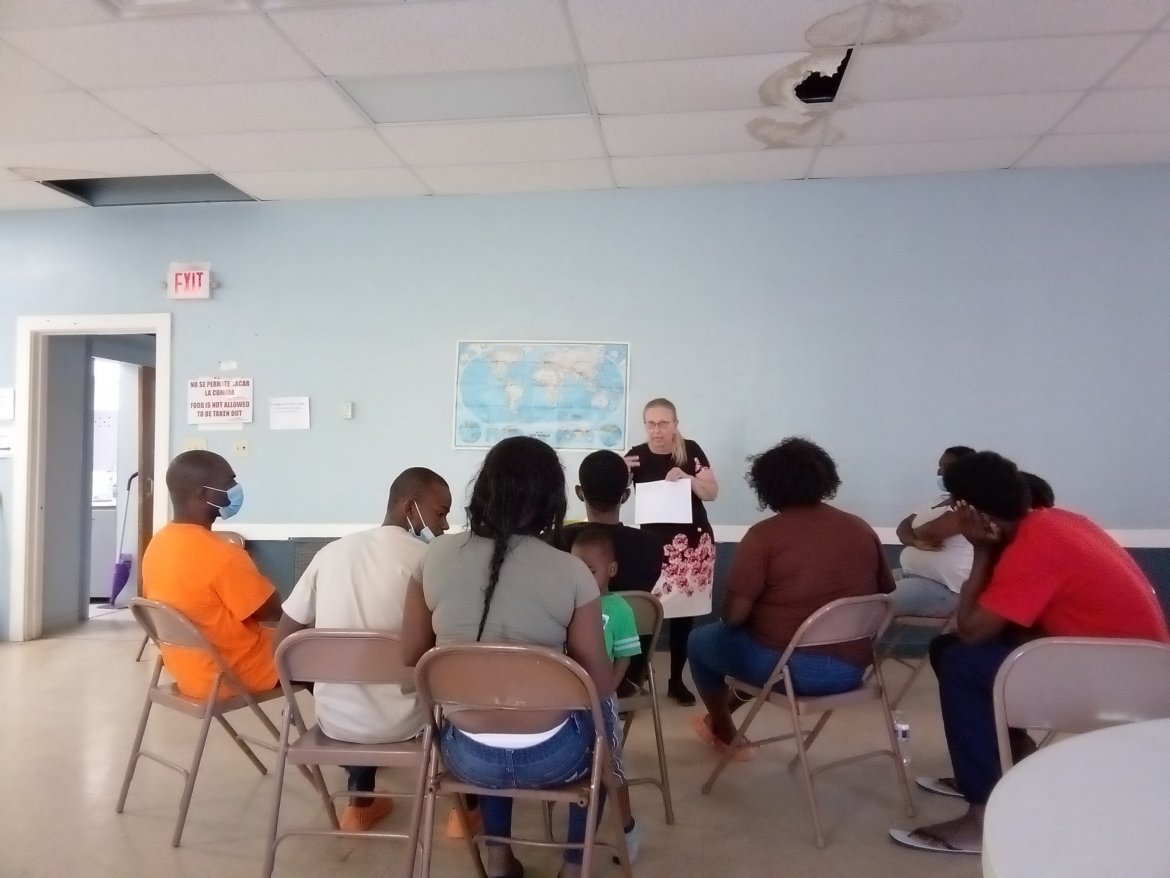 Rev. Kathy Hudak speaks to a group of asylum seekers as part of the Rio Grande Borderland Ministries. She is presenting a video on the rights the asylum-seekers have.

The bridge chaplain moves back and forth between the U.S. and Mexico to greet incoming asylum seekers or immigrants seeking legal entry into the U.S.

Sometimes Reza sees up to 900 people a day coming across the border.

“It’s a lot of work. Pray for us that we be able to continue to provide a safe space because if it wasn’t for the shelters, Border Patrol would just drop them off at the airport and we see how that’s going,” Reza said.

There is a government-run shelter in Las Cruces with 29 staff members that just received about $1 million in FEMA funds, Reza said.

“I think that’s a healthier way to run things,” Reza said. “That’s a good model that our government needs to have a place where we, as pastoral people, can go and be pastoral to the people instead of running the shelter barely and as a manager my volunteers who volunteer to stay the night, have a better chance of interacting than I do because I’m just moving around making sure everything is moving along.”

Many of the people Reza spoke to who are seeking asylum in the U.S. came from situations that were unsafe and getting worse and the family decided they wanted a better life in the U.S.

Reza, who specializes in adult education, went to the shelters in Juarez and found that education was needed there.

“It’s hard because you know a lot of them are not going to get asylum,” Reza said.

She started to read up on adult education then COVID-19 came to New Mexico.

“So everything kind of switched and changed,” Reza said. “We did a lot of fundraising. We did awareness in our community and then now, in March, we started going down there (to the Border) and we had this space here in El Paso. the congregations here and where me and Canon Lee (Curtis) work out of.”

Curtis serves as Canon to the Ordinary in the Rio Grande Diocese, which, in layman’s terms, essentially means he is the bishop’s chief of staff.

One of the main ministries at Rio Grande Borderland is sheltering migrants and asylum seekers while they await their cases to process or to wait for relatives to arrive.

“We are one of the smaller shelters. We house 20 people every Monday,” Reza said. “We ultimately want to do Monday and Thursday so it would be a total of 40 (people). We’re trying to figure out if that’s possible.”

Rio Grande Borderland Ministries accepts monetary donations and emergency supplies but what it needs most now are volunteers, according to Reza.

One of the benefits of volunteering is for the volunteer to see what life is really like in the U.S.-Mexico Borderlands.

“Once you’re in the shelter, you talk to the family members and you see how important it is for them to keep moving forward,” Reza said. “To get a good price on a flight, you have to wait, like, a month. There’s no time for that or space and it’s not good for the person to just kind of be. It’s better for them to start their journey. Start to see where they can get help, getting contact with these agents to get their kids to start school.”

Some of the people who come to volunteer are part of pilgrimages from other dioceses and denominations from across the country or are seminarians which are people attending seminary to become deacons or priests.

“We can’t do it alone,” Reza said. “That’s one thing that I always tell people: we need the help. I mean, we need help (from) other congregations within the U.S. to take on some of the sheltering or (other ministries).”

Volunteers go through a background check prior to safeguarding training which teaches participants about how to treat or take care of people in vulnerable situations. There are also conversations with potential volunteers to make sure they really want to volunteer for border work which can be strenuous both physically and emotionally, Reza said.

Some of these ministries  include showing the migrants how to do such things like enroll their children in school and how to get a bus pass.

The Rio Grande Borderland Ministries is a Episopal Diocese of the Rio Grande ministry that serves the borderlands of New Mexico and far west Texas.

The ministries have been active for decades “by working collaboratively to provide humanitarian support to vulnerable people in our border communities,” the Borderland Ministries mission statement says. “We help to ensure that our migrant neighbors are embraced in the service of justice, the interest of dignity, and the spirit of love. The compassionate response of RGBM is simple — to feed, shelter, and care for our neighbors on both sides of the border.”

Other Borderland Ministries include supporting shelters in Juarez and Ojinaga, Mexico, the Episcopal Migration Ministries, Frontera Welcome Coalition which helps migrants as immigration laws change, Boquillas and Beyond Mexican Mission which brings solar power to rural areas and Heart Nature Giving which works towards a sustainable food plan for the shelters.