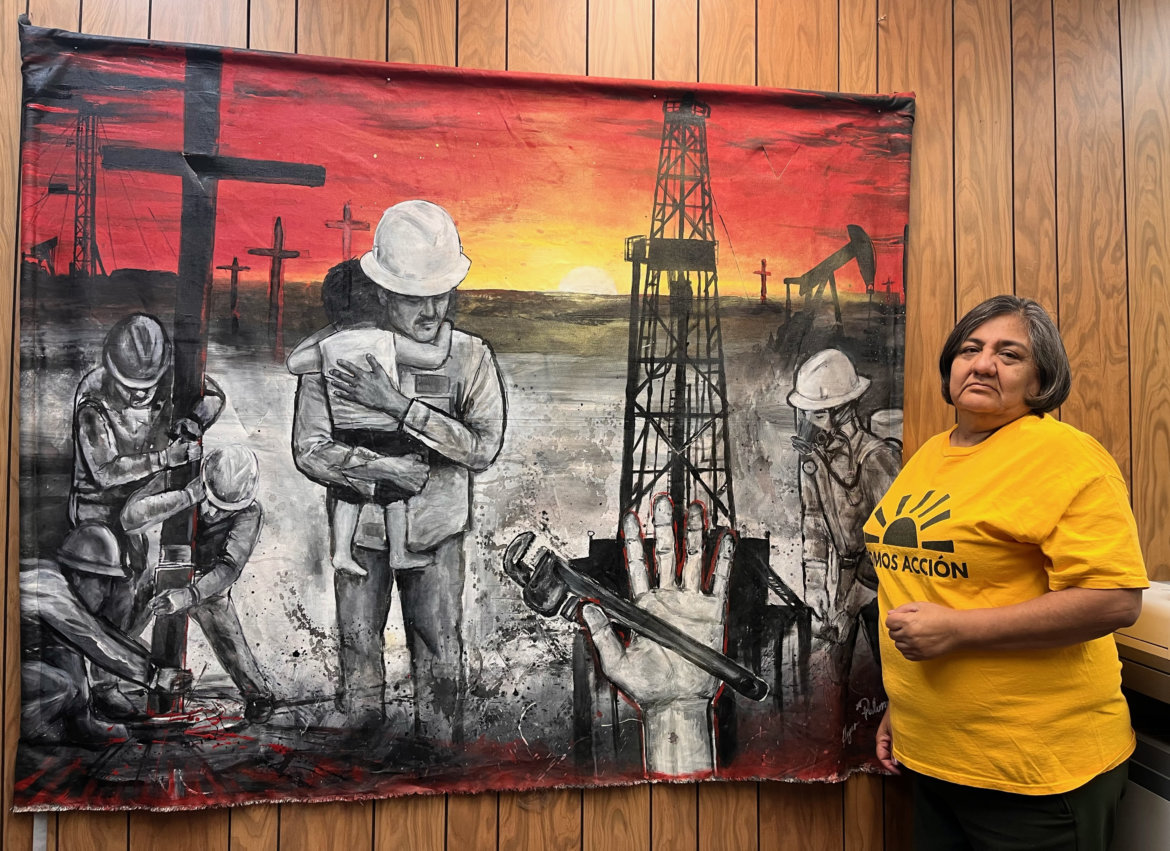 María Romano stands near a painting in the offices of Somos un Pueblo Unido, in Hobbs.

Since New Mexico’s early days of statehood, the oil and gas industry has ingrained itself in the fabric of the state’s finances. Today, Big Oil executives and pro-industry politicians link the state’s well-being with the success of oil and gas, highlighting its significance to the economy at every turn.

But while the oil and gas sector does serve as the primary source of employment in many parts of New Mexico, not all workers or their families feel that the continued dominance of the industry presents the best future for their communities. In the southeastern part of the state, home to the oil-rich Permian Basin, a grassroots organization has come out in support of a clean energy transition.

This story is from Searchlight New Mexico and is republished with permission.

Somos un Pueblo Unido, or “we are a united people,” started in the mid-1990s as an immigrant-led advocacy group that promotes racial justice, workers’ rights and a broad array of other issues. María Romano, based in Hobbs, has been a member of Somos since its beginning. She is now a full-time community organizer and a leader in her local chapter, working in Hispanic communities surrounding the state’s most prolific oil field. As the former spouse of an oil worker and the mother of three children who now work in the industry, Romano supports policies to diversify the state’s economy and create healthier jobs for communities. This week, she and other members of Somos were at the National Immigrant Inclusion Conference in the Washington D.C. area, presenting talks about the role of immigrants in the energy transition and the safety risks for immigrant oil field workers.

We caught up with Romano last month to ask her about the group’s work, why it’s needed and where it is going.

This interview was originally conducted in Spanish. It has been translated and edited for length and clarity.

Searchlight New Mexico: Somos is an immigrant and labor group. Why do you consider clean energy and climate change to be related issues — and how did Somos decide to get involved?

María Romano: We started to see the necessity of a transition in our community because when oil production falls, workers are laid off — and the first that get let go are undocumented immigrants. The majority of the labor force in the oil industry — the people who are in the fields, the people who die if there is an accident — are our people. They are the people who do the hardest work. There isn’t any other type of work here, so many families have to leave for other states.

We’ve seen that our neighbors in Colorado, Arizona, Texas and even Mexico are starting to do more with clean electricity. We worry that we are going to fall behind because of the whims of some politicians that don’t want to advance clean energy here. They won’t advance it even though they know that in the long term, it is what everyone needs.

Searchlight: Many Somos members and workers in southeastern New Mexico have jobs in the oil and gas industry or have family members in the oil fields. Why do they support the idea of moving away from fossil fuels, when their jobs might be jeopardized?

Romano: We see the damage the industry is doing to the community. It’s the schools, homes and low-income neighborhoods where there are the most wells. We have also seen many illnesses: respiratory illnesses, thyroid cancer. It’s a very high percentage of people compared to other communities, and the incidence is very high in people who work directly with oil. And even though we aren’t doctors or analysts and haven’t carried out a study or anything, we know this happens because we know the people who’ve died.

Also, we see that there will certainly be a change in the industry. We need to prepare this community for when this does happen, because it’s a community based almost 100 percent on oil. There isn’t any other kind of work. So we know that one day this will end — and if that happens this community will disappear.

Searchlight: New Mexico saw an estimated $5.3 billion in state and local revenue from the oil and gas industry in the 2021 fiscal year, according to the New Mexico Tax Research Institute. Do you think people in your area see a benefit from all this money?

Romano: I don’t think so, not our families and communities. You see other communities like Santa Fe and Albuquerque, and they all have better infrastructure than Hobbs. And the oil company owners don’t realize this. They don’t live here, they live in Texas. So we feel like all that money that goes to the state, it doesn’t come back here in any way.

Searchlight: It sounds like you’re saying that government and environmental groups don’t necessarily take the time to understand your community or take your problems into account when decisions are made. What would you like to see change?

Romano: Many of these groups think about dealing with climate change simply as phasing out extraction. They don’t think beyond that. They just think about how they can get rid of the damage that the industry is causing — but that’s not enough to then provide a life for the people left behind. There are people who survive through this work.

We worry that a lot of the talking and planning for a transition is happening in Santa Fe or in Albuquerque. We want it happening here, where these problems are happening. We want the projects for a just transition to be developed with us.

Searchlight: Why are members of Somos optimistic that jobs in things like wind and solar power would be better than jobs in the oil-based economy?

Romano: Oil jobs don’t pay as well as they say they do. These workers do get paid well, but they give a lot of themselves for that money, working from when the sun comes up until the sun goes down. Many of these men barely live with their wives and their kids. There are many divorces.

I lived through this personally. We came here about 30 years ago so my ex-husband could get a job in oil. I remember one time when my daughter was about 7, she asked me if her father still lived with us. She said that she hadn’t seen him in a very long time. He had been leaving early before she woke up and coming home late after she went to bed. I still remember that today and when I look around 20 years later, I see that this same thing is happening today in many other families.