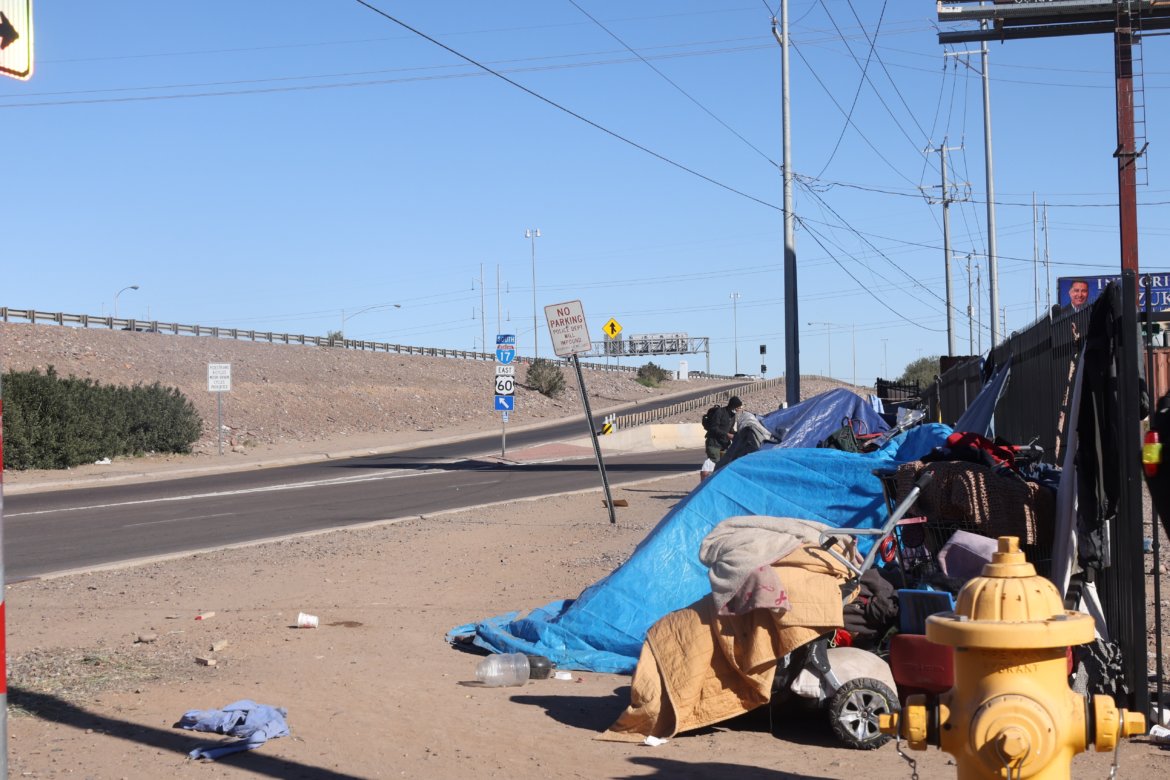 You need over a quarter of a million dollars, on average, to buy a house in Albuquerque.

It’s at least twice that much in Santa Fe.

Want to rent an apartment? Even a one-bedroom will be more than $1,000 a month on average according to data from apartmentlist.com, in a state with an average household income of $54,000 before taxes. And, of course, there are plenty of New Mexicans who make less, including at least 2,600 homeless.

“We must act, and act now; lives depend on it. We must include those experiencing homelessness in the conversation,” said Karen Cain, the founder of the Street Homeless Animal Project. “Affordable housing is a must, mental health services is a must, and there are many more musts to meet the needs of our homeless brothers and sisters.”

W Advocates who worked with the homeless praised the governor’s decision to tackle the issue, but said more needs to be done.

In her State of the State address Tuesday, the Democratic governor said she will ask lawmakers to fund a number of programs meant to help renters, homeowners and the homeless — mobile homelessness response units, eviction protection measures, down payment assistance programs and investments in the state’s Mortgage Finance Authority that can be matched or topped by federal funds.

“We need thousands more homes — so let’s build them,” Lujan Grisham said in her speech.

And just like that, in a 60-day legislative session expected to be dominated by talks about the budget surplus, crime, gun control, public education and water, housing moved up into the top 10 — maybe even the top five — of priorities.

Amy Whitfield, the recently appointed advisor for housing and homelessness issues for Lujan Grisham, said in an interview the state is working to support contractors building more affordable housing — and building that housing more quickly to meet the needs of those who can’t find a place to live.

Sometimes, she said, local municipal zoning laws are a barrier to that. That’s why, Whitfield said, the state is proposing $13 million in incentives to municipalities to “update zoning policies so developers build faster and build more affordable housing.”

On the rental front, another $6 million would go to landlord support programs designed to get landlords to accept vouchers to encourage them to rent to people facing behavioral health challenges, she said.

Some lawmakers say the state’s housing shortage makes it harder to attract people to work here.

“The shortages we have with teachers, health care providers, law enforcement and other professionals? Housing costs have a big impact,” Sen. Nancy Rodriguez, D-Santa Fe, said in an interview. “We don’t have enough — not nearly enough — housing for people to be attracted to New Mexico. They can’t afford to live in New Mexico and they can’t find housing. And it’s worse for people who with low or middle income.”

Rep. Tara Lujan, D-Santa Fe, brought up the same issue at a recent legislative committee hearing, saying teachers still cannot find housing or rental units in Santa Fe. Many, she said, live some distance away from Santa Fe and commute into town to work. Why, she asked, would these professionals work in Santa Fe if the school districts they live in offer more affordable housing or at least the chance to work there and save money and time commuting to Santa Fe?

“That [idea] expands to other professions,” she said in an interview after the hearing.

A Legislative Finance Committee report issued Monday — the day before the session began — said over the last decade the number of homeless people in New Mexico had declined by one-third, to about 2,600 homeless individuals on a single night in 2022.

Whitfield questioned the drop in numbers, saying it’s difficult to count the number of homeless because so many go unreported. She said homelessness includes “people living three families to a house, a problem of getting evicted and moving from motel to motel in order to keep their jobs and keep their kids in schools.”

And COVID-19 made things worse, some say.

“We just can’t find any housing for our clients,” Edward Archuleta, the executive director of the St. Elizabeth Shelters, said in an interview. “Normally, before COVID … we were averaging between 50 to 75% of our clients in the shelters were getting housed, which was pretty phenomenal. … Now, we’re lucky we get a quarter of our folks housed. In fact, we’re having to send them to other cities or even out of state; they can’t afford to live here.”

Archuleta said diverting funds to public housing programs, like the Santa Fe Civic Housing Authority, could be a part of the solution, though there is often a stigma around it.

“A lot of people don’t like it because they think they are the projects, they think, ‘Not in my backyard,’ ” Archuleta said. “Public housing is scattered all over Santa Fe, and we really don’t have that many problems with residents. They have security, they have staff on site, and they are run very professionally. So I think, they should give more money to housing authorities.”

Rachel Biggs, the chief strategy officer for Albuquerque Health Care for the Homeless, said investments in the New Mexico Housing Trust Fund and the Linkages Program, which provides rental assistance for people with severe mental illness, could also help.

“Linkages is a very successful and well-liked program across the state that provides supportive housing, with voluntary wraparound services for people to exit homelessness and maintain their housing,” Biggs explained.

Though creating new affordable housing options is seen as a top priory for advocates this legislative session, Biggs said keeping people in their current homes through rental assistance and other resources is just an important. About 72,000 households in New Mexico are living on extremely low incomes, under $30,000 a year, he said. Roughly 84% of those households are cost-burdened, meaning they spend more than 30% of their income on rent and utilities.

“These are households that are at risk of homelessness because they’re spending too much of their income on rent,” Biggs said.

Archuleta said funding mental health services and substance abuse treatment will also be essential to helping people who are homeless or facing housing insecurity. He said many of St. Elizabeth’s clients who are looking for these services have to wait months before they can see a provider or get into a treatment facility.

“That’s just unacceptable,” Archuleta said. “If someone is going through a crisis, they need help now.”

Some advocates said policymakers will need to get creative to address homelessness.

Cain, whose nonprofit helps homeless people care for their pets, said there is no one-size-fits-all solution to homelessness, especially for people who are currently out on the streets. She said affordable housing and mental health services are vital, but so is finding these people a safe place to stay while they try to improve their situation.

Many of the people Cain works with will not go to a shelter because they have pets; don’t want to be separated from their partner; fear being assaulted; or aren’t allowed into shelters due to substance abuse. She said a safe outdoor space similar to Camp Hope, a transitional living community in Las Cruces that provides tents, showers and cooking facilities to homeless residents, could be what those people need to turn their lives around. Many of these outdoor spaces connect residents with resources they need to transition into permanent housing, including drug and alcohol abuse treatment, mental health services and identification documents.

Rodriguez, who has introduced several bills to improve the housing and homelessness situation in New Mexico over the years, said behavioral, emotional, mental and substance abuse issues are all tied to housing. How, she asked, can you feel secure if you don’t have a place to go home to at night where you feel grounded?

For Rodriguez, anything the state does to improve the lives of its residents is tied to the issue of home.

“It doesn’t make sense to me that we have a comprehensive system of support systems if we don’t have housing,” she said.