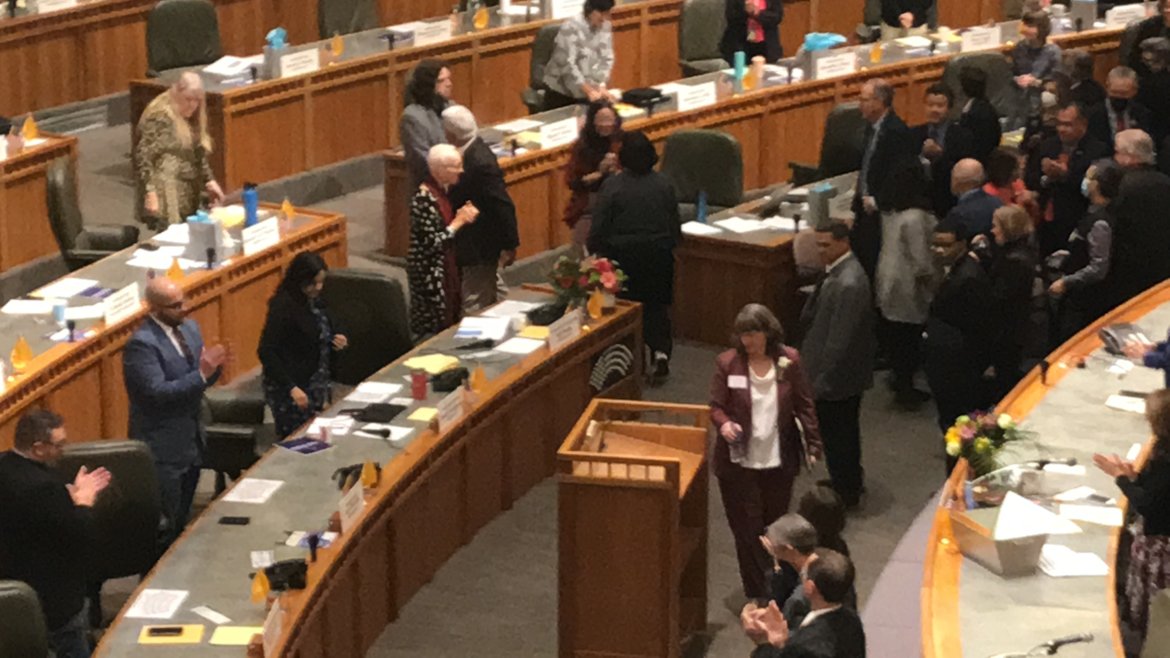 New Mexico Supreme Court Chief Justice C. Shannon Bacon approaches the lectern in the state house chamber to deliver the State of the Judiciary address to a joint session of the New Mexico Legislature Tuesday, January 24, 2022.

This was the first time in four years a State of the Judiciary Address has been delivered in New Mexico.

“The Judiciary is battered and bruised, strong, resilient, creative, committed, and caring. I hope through my words today, this will be evident,” Bacon said.

Bacon discussed four issues including the judiciary’s efforts through the COVID-19 pandemic, highlighting programs that help the community, criminal justice reform and the judiciary’s legislative requests.

The COVID-19 pandemic brought virtual meeting technology to everything from business meetings to public school lessons to court hearings.

The New Mexico judiciary opted to continue virtual hearings to make them more accessible to those who may have problems getting to a hearing.

“Remote and hybrid hearings, depositions, mediations, and even bench trials not only kept participants safe, but saved time and costs, and improved access for those New Mexicans who have a difficult time traveling to court. We are working to expand the use of technology in courtrooms,” Bacon said.

Two of the ways the courts are trying to expand virtually is through virtual jury selections and placing so-called “justice stations” in communities for those who do not have broadband access, Bacon said.

The virtual proceedings included about a million virtual hearings and bench trials in 2020 and and 2021 alone, Bacon said.

“In 2022, the Judiciary stayed on track, conducting 453,349 hearings and bench trials, and 1,204 jury trials,” Bacon said. “Courts cleared more cases than were filed in the 2022 fiscal year. The disposition rate (the percentage of adjudicated cases compared to the number of new and reopened cases during the fiscal year) was 103 percent for district courts statewide, 105 percent for all magistrate courts and 108 percent for the Metropolitan Court.”

One of the unexpected situations brought forth by the pandemic was the Eviction Prevention and Diversion Program.

The program has sunset due to all of the federal funding being distributed.

Other programs implemented include the Commission on Equity and Justice and the New Mexico Commission on Mental Health and Competency.

The Commission on Equity and Justice studies race and bias issues in the justice system and works to promote diversity among judges and judicial employees, Bacon said.

“The commission (on Mental Health and Competency) has a broad range of responsibilities, including reviewing policies and procedures concerning a person’s competency to stand trial and considering how to better identify people in need of mental health treatment before they enter the justice system,” Bacon said.

Another program that flourished during COVID-19 were self-help programs that help people without attorneys as they work through the legal system, Bacon said.

“When people have access to legal resources such as plain language forms, legal advice, self-help centers, or a pro-bono attorney, they are empowered with knowledge about their full rights and the legal process, giving them access to the justice they deserve,” Bacon said.

The helpline started in October with collaboration from Rep. Pameyla Herndon, D-Albuquerque, the State Bar and the Supreme Court’s Access to Justice Commission, Bacon said.

The helpline is an expansion of the Legal Aid Volunteer Attorney Program that functions as a “civil legal telephone helpline and pro bono referral service,” the Modest Means Helpline website states.

The helpline does not help with criminal matters.

“Under the bail bond system, when someone was accused with a crime, including those we as a society label as the most dangerous, the accused was permitted to post a money bond,” Bacon said. “With the elimination of money bail, judges now have the ability to assess dangerousness. Something they could not do before.”

Bacon had two requests for the Legislature as it considers criminal justice reform.

“So, as the legislature considers these hard issues, I have a few requests of each of you: First, make your policy decisions based on what the Constitution mandates, and on verified data and facts. Second, that you fully consider and understand the impact of your decisions. What the costs are – both fiscal and human,” Bacon said.

The first legislative priority Bacon mentioned was about salaries.

The state Supreme Court Justices would like to have the same pay rate and federal magistrate judges which will give Appeals Court judges through Metropolitan court a pay raise, Bacon said.

The initiative passed the legislature during the 2022 Legislative Session but was not signed by Gov. Michelle Lujan Grisham.

The judiciary also wants their staff to be paid the same as executive branch staff doing similar work, Bacon said.

“As co-equal branches of government, this increase is essential for recruitment and retention of judicial branch employees,” Bacon said.

Another request is for the legislature to create an Education Services Division in the Administrative Office of the Courts for judicial officers and employees to “ensure quality and accessible education necessary for our courts to provide judicial services to all New Mexicans,” Bacon said.

The judiciary is also wanting to end post-adjudication fees as a way of funding judiciary and other state state programs. The fees are not fines.

“If these programs are important to you and to New Mexicans, they should be paid for with revenue from the general fund and overseen by the Legislature,” Bacon said.

“We support this, because we cannot do this work without these partners,” Bacon said.