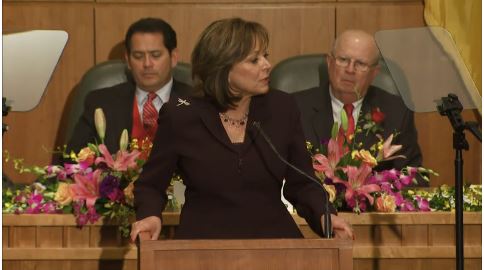 Susana Martinez at the 2015 State of the State address.

Martinez stuck to her guns on education while adding a push to right-to-work legislation to her agenda.

The biggest addition from past speeches was a push for right-to-work. The legislation wasn’t on the radar for Republicans in the recent past but the takeover of the House of Representatives by Republicans pushed it to the top of their agenda.

“I firmly believe that every person should be allowed to choose for themselves whether they want to join a union or contribute to one,” Martinez said.

Right-to-work legislation is expected to pass the House despite opposition from Democrats and labor unions in the state.

One of Martinez’s biggest pushes is school retention. This would stop students who are not able to read at third-grade level in the third grade from passing to the fourth grade. The legislation Martinez advocated included interventions for students who are having trouble reading from kindergarten through third grade.

“We have condoned this for far too long, taken the easy way out, and made the comfortable decision,” Martinez said.

Martinez urged legislators to “choose progress, not politics, on this issue.”

Democrats have stopped the legislation from passing in the past couple of years. They have argued that parents should be able to decide whether or not to hold their students back.

“They took a district that had only one ‘A’ school four years ago to five ‘A’ schools today, and nine ‘D’ or ‘F’ schools back then to zero now,” Martinez said.

While there have been calls for bipartisanship from Republicans and Democrats since the elections, Martinez began her speech with a shot at Democrats.

“Yes, Republicans in particular had a strong showing on election night, with candidates who supported tax reforms and education reforms defeating incumbents who had been defenders of the status quo,” Martinez said.

One piece of legislation that legislators — in both parties — have balked at in the past is lobbying cool-down laws.

“As we have done with appointees in my administration, legislators should not be able to serve in government one day, then lobby that same government the next,” Martinez said.

Another law that has been largely supported by Republicans but has been unable to pass the Senate, which is still controlled by Democrats, is that of allowing undocumented immigrants earn drivers licenses. Democrats say the law would make roads less safe, while Martinez and Republicans say the law attracts crime.