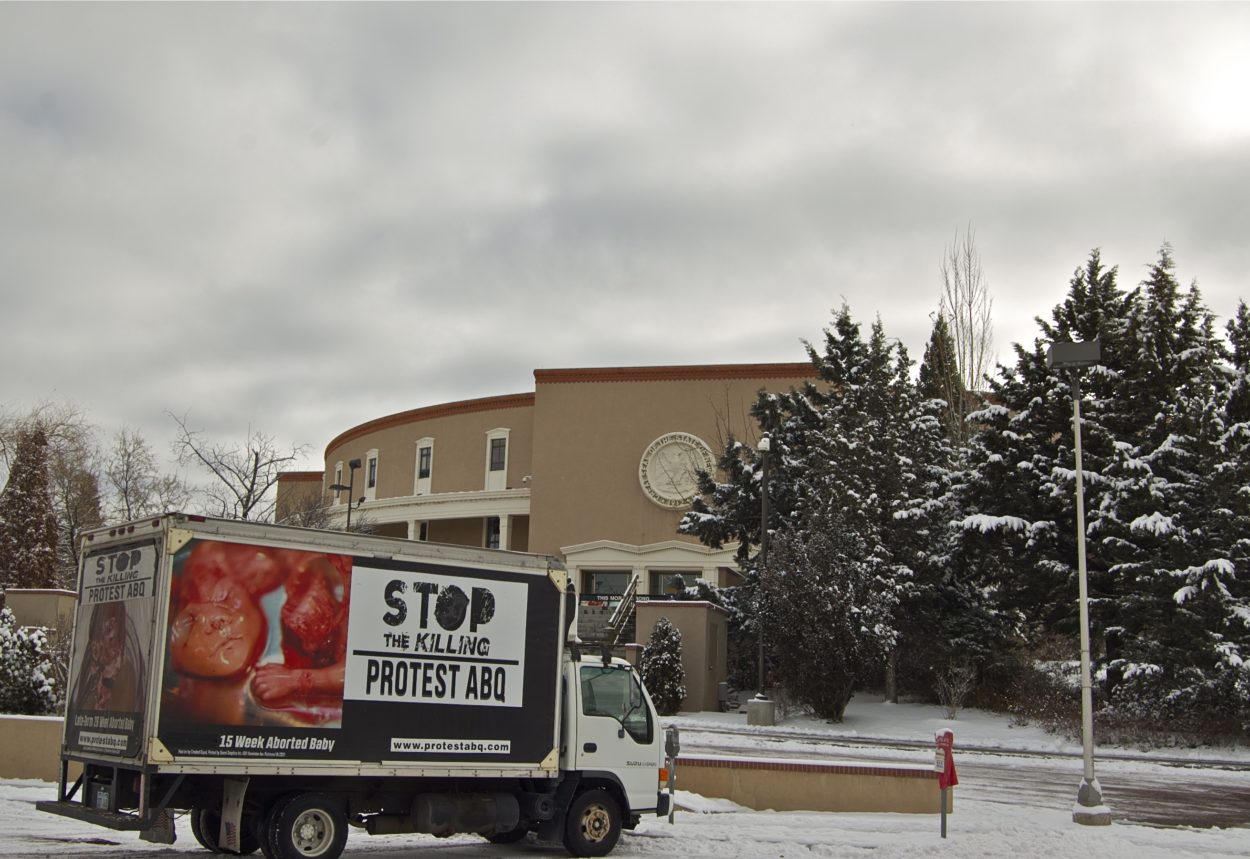 For Sara and Josue Maldonado, the question of whether abortion access should be curtailed in New Mexico boils down to starkly defined principles: Human life begins at conception and should be protected without exceptions.

“When I had my baby in September, I’d hold her in my arms and think, ‘She’s a person,’” said Sara, who adds she used to call herself pro-choice. “In my opinion, it’s not just a woman’s body. It’s also the body of the living being who’s inside her.”

Josue chimed in, saying that he believes public funding for Planned Parenthood should be cut and that contraception is harmful to women’s health. (Medical research indicates that hormonal birth control health risks are complex; it may increase risk of breast cancer for some women while also lowering risk for other cancers and health conditions.)

The Maldonados were among an estimated 200 people assembled yesterday in the Roundhouse rotunda as Allen Sanchez, executive director of the New Mexico Conference of Catholic Bishops, presided over a lineup of speakers. The tone of local Catholic leaders, anti-abortion activists and conservative lawmakers was optimistic. Sanchez and others urged attendees to both pray for and lobby legislators throughout the session.

The pro-life movement is growing and better organized, he added, and technological advances in ultrasound imagery have helped bolster the case of abortion opponents.

“When you can see pictures—it’s a baby, and there’s no doubt that abortion is killing a human being. It’s hard to take a hardline approach, unless you just like killing people,” said Sharer.

He said measures like mandatory parental notification for minors seeking abortion will help lower the number of procedures performed in New Mexico. Proposals to restrict abortions for women with pregnancies beyond 20 weeks—parameters included in a ballot measure rejected by voters in Albuquerque in 2013—will find greater support today at the state level, Sharer added.

“The measure in Albuquerque failed because people didn’t understand it because of the way it was drafted, and the City Council, by moving the election, intentionally tried to defeat it,” he said.

Listening on the outskirts of yesterday’s rally was Adriann Barboa, field director for Strong Families New Mexico. Strong Families was part of the coalition of groups that successfully pushed back against the Albuquerque ballot measure to restrict later-term abortions.

Barboa said abortion opponents’ messaging relies on fear and misconceptions. As a single mom of two kids, one of them a 14-year-old girl, Barboa said she knows firsthand the importance of protecting rights of everyone to obtain safe, comprehensive medical information and services—abortion included.

“There is no black and white in this issue,” said Barboa. She cited the experience of her cousin and his wife, who developed a severe complication during the last months of her pregnancy. At one point the couple was forced to contemplate choosing between the life of the mother or the life of the fetus.

“The decision to have an abortion is complex and stems from a range of issues, often medical reasons, and we’re not in a position to speak for individuals or families,” said Barboa.

She also responded to abortion opponents’ contention that services in New Mexico should be limited in part to protect women who travel here from places with stricter abortion laws.

“That’s really about other states’ political climates, not ours. The fact that we have sound, smart policy around women’s access to a full range of medical care, including abortion care, is a reason why we’re one of the states that folks come to.”

That access, said Barboa, is what she and other reproductive rights advocates are prepared to defend.

“As a lifelong resident of New Mexico, I know that New Mexicans are resilient. We constantly hear things about our state that are stacked against us. I’m proud of the fact that our families are resilient enough and smart enough to make their own decisions about our own bodies and families.”