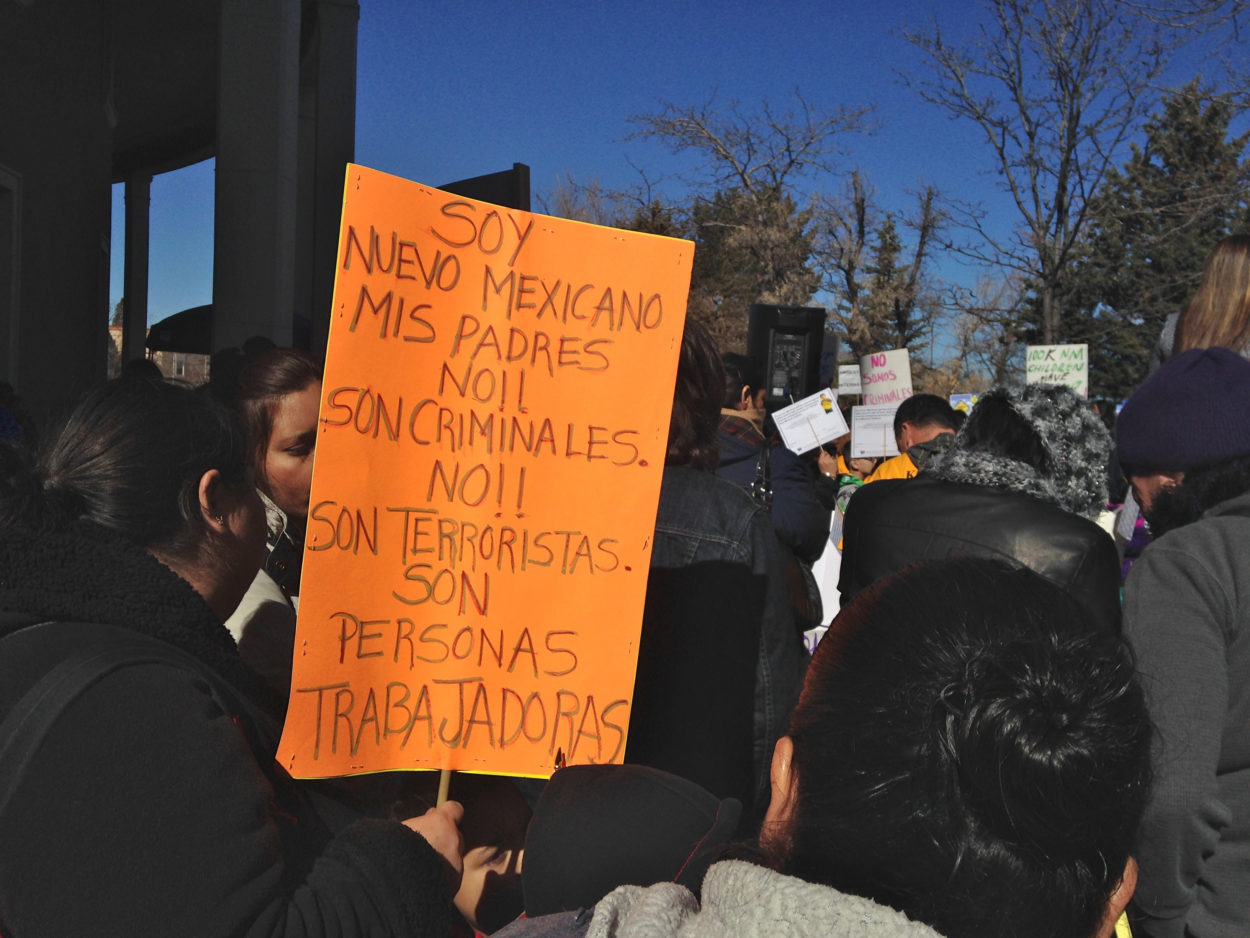 Photo from a 2015 rally opposing the repeal of the law allowing undocumented immigrants to obtain driver's licenses. Photo by Margaret Wright.

Sharp partisan lines were drawn yet again during further passage of a bill proposing to do away with the state law that allows undocumented immigrants to apply for driver’s licenses.

The House Judiciary Committee’s Republican majority voted 7 to 6 in favor of sending HB 32 on for a House floor vote following five hours of debate that frequently circled back to the controversial federal REAL ID Act.

A measure sponsored by Bill Rehm, R-Albuquerque, also proposes to not allow undocumented immigrants to obtain driver’s licenses. It was held over until the next committee meeting.

Rep. Paul Pacheco, R-Albuquerque, helped craft the House Judiciary Committee’s early-morning substitution for HB 32. The changes were so sweeping, they negated the bill’s original title. The original bill revolved around a plan to create two new kinds of driver’s licenses—one for New Mexico residents who are U.S. citizens and another for foreign nationals who can prove they have legal permission to be in the U.S.

The substitute proposal calls for one driver’s license for both citizens and foreign nationals. The latter would be allowed to hold New Mexico driver’s licenses until their federal permission to be in the United States comes to an end.

Nuñez, who wasn’t using a microphone, could barely be heard in the large committee room, but Egolf disputed Nuñez’s contentions: “He’s saying that New Mexico driver’s licenses are being questioned or denied in Arizona or Texas because the possessors don’t look like New Mexicans.”

Egolf went on to ask what harm the legislation seeks to address. Pacheco deferred to Padilla, who said New Mexico runs the risk of falling out of compliance with federal REAL ID Act requirements, which would “put an additional burden on New Mexicans who want to fly or use federal facilities.”

While Rep. Ken Martinez, D-Grants, said he worried the bill could be considered unconstitutional if challenged in court, Egolf said his concerns were about wording, including potential “loopholes that could subvert the stated aims of the sponsor.”

He also objected to new language Padilla and Pacheco said would help account for federal executive orders extending temporary relief from deportation for many undocumented immigrants already in the United States.

“All the things being added in here are pointless,” he said, adding that the Tax and Revenue secretary would still retain final authority to either allow or deny a license to any individual. “It’s a fool’s errand to try to legislate around executive action.”

Furthermore, said Egolf, “I believe the department already possesses the authority it needs to address fraud. … I don’t see that this does anything to address that.”

Pacheco said he remains open to working toward a bipartisan solution to create two separate tiers of driver’s licenses, one of them for foreign nationals, but Democratic lawmakers sounded pessimistic.

Republicans campaigned on the premise that they’d repeal the current driver’s license law, said Rep. Antonio “Moe” Maestas, D-Albuquerque. “The beauty of the governor’s propaganda arm is that now if this bill doesn’t become law, they can portray this as, ‘We tried to pass a two-tiered law and those darn obstructionists won’t allow it.’”

Several of the same individuals who testified in support of the measures during the previous hearing were back today in favor of the new HB 32, including Greater Albuquerque Chamber of Commerce President and CEO Terri Cole and State Police Chief Pete Kassetas.

Greg Fouratt, secretary of the Department of Public Safety, said current state law should be overturned because “New Mexico driver’s licenses have become a commodity for criminal rings across the country.”

Like the bill’s last committee hearing, opponents of the measure far outnumbered supporters. Several of the people testifying identified themselves as immigrants, saying they need driver’s licenses to transport their children to and from school and medical appointments.