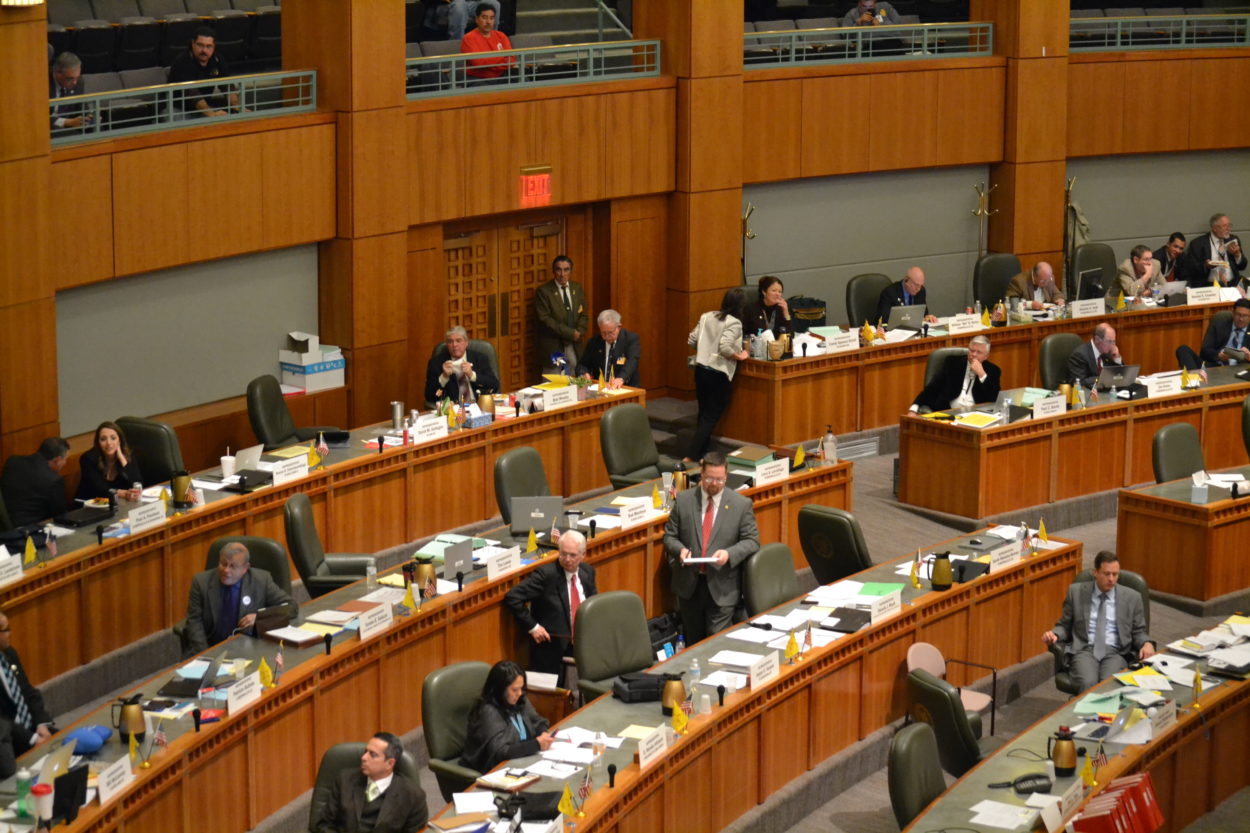 After a lengthy floor debate, the House passed right-to-work legislation on a near party-line vote, with one Democrat voting in favor of the legislation.

The Employee Preference Act, sponsored by Rep. Dennis Roch, R-Logan, was debated for almost four hours before the members voted 37-30 on an amended version of HB 75.

The legislation was amended on the floor to more closely tie a minimum wage increase to the right-to-work portion of the bill. The legislation had also been previously amended in committee.

Roch told the body that his proposed amendment added a contingent repeal that would strip the bill of the minimum wage portion in the event that a New Mexico judge rules fair share payments unconstitutional and vice versa.

The amendment passed on a 36 to 30 party-line vote after almost two hours of debate from both Republicans and Democrats. During debate, Roch told the rest of the body that his amendment was an attempt to protect the two major portions of his bill.

Minority Floor Leader, Brian Egolf, D-Santa Fe, said, “I have to confess I’m very confused and perplexed by this amendment.”

Egolf went on to say the amendment seemed like an admission that the original bill may be unconstitutional and an unnecessary protection from the judicial branch. He added that he wouldn’t pay for insurance to protect his suit from catching fire.

“I don’t think my suit will spontaneously combust,” Egolf said.

Rep. Jim Dines, R-Albuquerque, countered Egolf’s claim with a reference to comments made in an previous committee meeting. In the House Judiciary committee meeting earlier this month, some Democrats raised concerns that HB 75 is unconstitutional. Those comments, Dines said, were an indication of how some judges might react.

“[The amendment] took what was a heavy lift and made it a damn near impossible lift,” Martinez said referring to the complicated wording of the bill.

Other Democratic members spoke about the overall intention of the bill and said it would not improve the economy or job situation in the state.

“This [legislation] is ill-timed, ill-advised and nothing but a distraction,” Rep. Javier Martinez, D-Albuquerque, said.

Speaker of the House Don Tripp, R-Socorro, allowed debate to continue past the usual three-hour time limit. The remaining debate came from Democrats and lasted about 30 minutes.

The only Democrat to vote in favor of the bill was Rep. Dona Irwin, D-Deming. After the floor session, she was seen wiping tears from her face.

House Minority Whip Sheryl Williams Stapleton, D-Albuquerque, told New Mexico Political Report that Irwin was upset about voting in favor of right-to-work. According to Williams Stapleton, Irwin is personally against the proposal, but her district is against it.

Right to work has been a hot topic this legislative session and Roch’s legislation had already been through three days of committee meetings before Wednesday’s floor session. The topic, largely dormant in recent years, has been a priority of House Republicans after taking control of the chamber for the first time in decades.

During an earlier House Judiciary Committee hearing, Majority Floor Leader, Nate Gentry, R-Albuquerque, proposed a substitute bill that would tie a minimum wage increase to the original legislation, an act that was met with hours of debate from Democrats.

That substitute passed the committee on a party-line vote.

Roch’s new version of HB 75 will head to the Senate for committee assignments. Conservative Senate Democrats have said they would not vote to blast it out of committee if it fails to pass a committee.