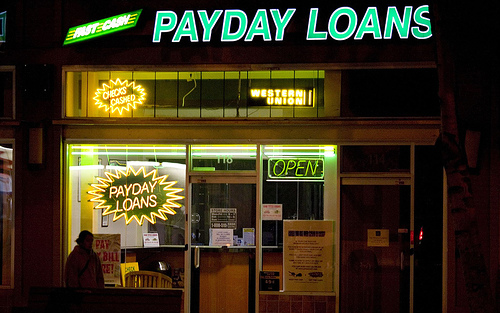 A bill uncontroversial on its face about payday loans became the focal point of yet another drawn-out skirmish in the House.

Members of the two political parties argued pros and cons of more stringent regulations for entities that offer payday and other high-interest small loans.

Powdrell-Culbert said she proposed the legislation after hearing concerns expressed in committee meetings about the high interest rates charged by tax refund lenders, the majority of whom provide services to low-income people.

Powdrell-Culbert’s measure requires lenders to provide disclosures to consumers about the terms of tax refund loans. It also caps their interest rates at 85 percent of the estimated federal federal and state refunds and tax credits.

According to the nonprofit National Consumer Law Center, 21 million Americans got a tax refund anticipation check last year. The NCLC describes such transactions as high-cost loans on the cost for preparing tax returns, adding that some companies also charge fees that contribute to the overall cost to consumers.

A report released this month by the NCLC in collaboration with the Consumer Federation of America recommends that tax preparation fees “be subject to standardized, easy-to-use disclosure.”

Rep. Debbie Armstrong, D-Albuquerque, introduced her own substitute bill that she and several other Democrats said would offer superior consumer protections by capping interest rates for high-risk small loans at 36 percent.

The 36 percent interest rate cap is a touchstone for opponents of the high-risk small loan industry, according to Andrew Morrison, executive vice president for Sun Loan/Brundage Management, when he appeared on the KUNM News Call-In Show on March 5.

Morrison said the 36 percent cap isn’t realistic, because at that rate, “there would be no lending at all. Storefront lending is what you want to see, because the alternative … is that the loans come from a place you can’t see and license.”

In today’s House debate, Rep. Javier Martinez, D-Albuquerque, said he’d seen firsthand how his district has been affected by what he called “a high saturation” of high-risk loan providers.

“We literally have them on every corner. That’s not a good thing … It’s extremely depressing in every sense of the word to have these business models encroaching,” said Martinez.

“I think you’re doing more harm to those who really need this the most,” said Rep. Monica Youngblood, R-Albuquerque, who said high-risk small loans are sometimes a last resort for low-income folks who “have bad credit, lack of credit or no credit at all.”