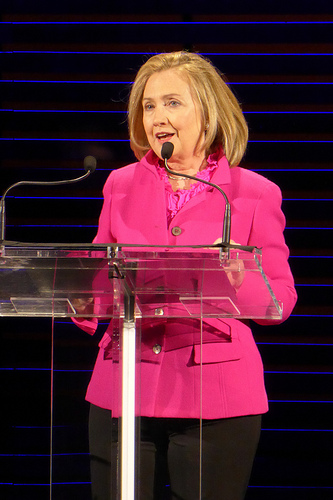 Hillary Clinton launched her presidential bid on Sunday, ending one of the worst-kept secrets in American politics.

As Clinton launches her campaign, she is a significant favorite to take the Democratic nomination that she lost to Barack Obama in 2008.

One reason why, FiveThirtyEight explained, is endorsements.

Clinton has pretty much already won the endorsement primary, the all-important pre-voting race to lock up party establishment support.2 Last time she ran for president, Clinton lost the endorsement primary. By this point in the 2008 campaign, she had only one senator endorse her publicly. According to a CNN count in February, Clinton has already secured endorsements from 27 of 46 Democratic senators. That’s a ton of support so early in the campaign.

I’m in with @HillaryClinton because she’s the champion everyday Americans need. Someone who will fight for working people and invest in clean energy. Will you join me? #Hillary2016

I’m ready for Hillary! @HillaryClinton has the experience to be our next President. Join her team here: https://t.co/h1FKGxOOZg

Rep. Ben Ray Lujan, who is the chairman of the Democratic Congressional Campaign Committee, did not endorse Clinton but gave a glowing quote, according to the Albuquerque Journal.

Of course, those are just Democrats.

The Republican Party of New Mexican briefly changed their Twitter avatar to say “Stop Hillary” instead of their typical logo.

The Republican race is much more wide-open. Senators Ted Cruz of Texas, Rand Paul of Kentucky and Marco Rubio of Florida have all said they are running, while nine other Republicans are considering runs according to the New York Times.

Perhaps the most-high profile Democrat in the state is former governor Bill Richardson. From Politico:

“I don’t see a path for anyone not named Clinton,” declared former New Mexico Governor Bill Richardson, who served as United Nations ambassador under Bill Clinton before running against Hillary in 2008.

“You know I don’t get along with her,” he noted, by way of explanation. “I’m not a Ready for Hillary person. I’m trying to be honest with you.”

After dropping out of the 2008 Democratic presidential primary, Richardson endorsed Obama, perhaps permanently severing his relationship with the Clintons.

Despite this, he still believes Clinton will be the Democratic nominee next year.

Added information about Sen. Tom Udall’s support for Clinton including tweet. Story previously said a spokeswoman told the Albuquerque Journal that she had to check on if Udall supported Clinton.