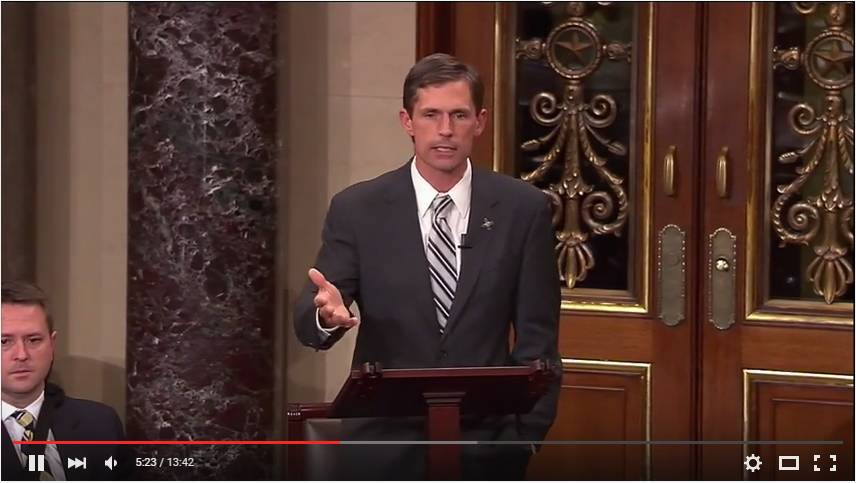 It’s a rarity in the Senate these days: bipartisan cooperation. And even more of a rarity: a bipartisan filibuster.

Senator Rand Paul of Kentucky, a Republican, conducted a filibuster over the National Security Agency’s bulk collection of data.

When Paul, who is also running for President, conducted his filibuster, it wasn’t only a few his fellow Republicans who helped him out—there were even more Democrats, including New Mexico’s Martin Heinrich.

From the National Journal:

Heinrich’s portion of the hours-long filibuster lasted over 13 minutes, including some interaction with Paul. The full video, courtesy Heinrich’s office, is available at the bottom of the post.

The junior Senator from New Mexico has been a critic of domestic surveillance by NSA.

During his portion, Heinrich criticized Barack Obama over not doing more to stop the bulk data collection.

“I’ll admit, however, and my friend from Kentucky has brought this up on several occasions already, that I’m incredibly disappointed that the President hasn’t used his existing authority to unilaterally roll back some of the unnecessary blanket metadata collection,” Heinrich said.

Rand Paul during a filibuster on NSA bulk data collection on May 20, 2015.

Heinrich said, however, that it is “nonsense” that this means Obama wants to keep the current program.

“The President has asked Congress to give him additional authorities so that he can carry out the program in an effective manner, and the USA Freedom Act seeks to do just that,” Heinrich said.

The USA Freedom Act is a bipartisan piece of legislation that Heinrich co-sponsored the Senate version.

A version has already passed the House of Representatives and was a rare occasion where all three members of New Mexico’s House delegation voted the same way on a high profile bill. The delegation is made up of two Democrats, Reps. Ben Ray Luján and Michelle Lujan Grisham, and one Republican, Rep. Steve Pearce.

That legislation would end the bulk collection of data while keeping many other portions of the PATRIOT Act.

The House version of the USA Freedom Act was introduced by Rep. James Sensenbrenner, R-Wis. He’s the same representative who introduced the PATRIOT Act in 2001.

During his time on the Senate floor, Heinrich asked Rand Paul about how the NSA data collection of “law-abiding American citizens” squared with the Fourth Amendment, which protects those in America from search and seizure without a warrant.

“I think there’s no way that we can square this bulk collection with the Fourth Amendment,” Rand Paul answered. He says he believes that the country has “over a long period of time diminished the protections of records held by third parties.”

“I think there will come a time that your papers that were once held in your house, there are no papers in your house,” Paul said. “There may not be paper. But there’s still the concept of records.”

He mentioned phone and email records as examples.

“I think there has to be Fourth Amendment protection of these,” Paul said.

While he did not participate Senator Tom Udall, a Democrat from New Mexico, also presumably appreciated that Paul actually did a talking filibuster. In 2013, Rand Paul filibustered to protest drone killings and Udall said he respected Paul for “going down to the floor and demonstrating what a real filibuster looks like.”

Udall has been a proponent of filibuster reform since joining the Senate in 2009.

Rand Paul’s filibuster lasted ten and a half hours. With a little help from his friends.