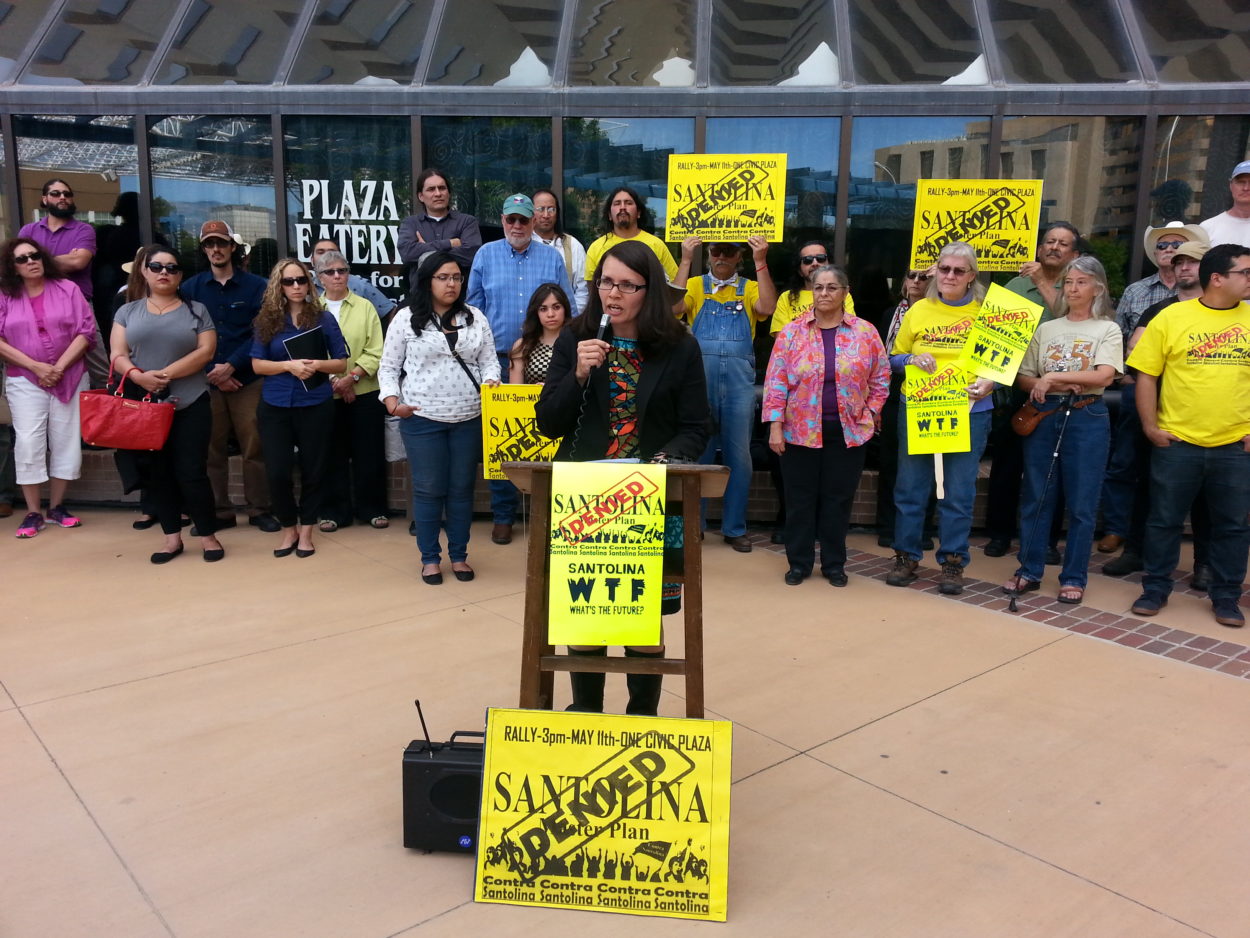 Dozens of protesters shouted, “Shame!” as Bernalillo County commissioners voted against three appeals of a planned community on Albuquerque’s Westside.

Each appeal protested the Bernalillo County Planning Commission’s recommendation to approve the Santolina master plan for a variety of reasons, including a lack of transparency with how Santolina will use water resources, disagreements over Santolina’s job promises, a perceived inconsistency with the Mid-Region Council of Governments’ future transportation plans and more.

There was no vote on the final approval of the plan, but it could come as soon as the next meeting, held in June.

The climactic end to the hearing showcased competing philosophies over economic development.

Santolina is a planned community that intends to build homes for up to 90,000 people spread across 22 square miles in the southwest side of Albuquerque. To its proponents, the development represents an opportunity to provide jobs for a growing population.

Western Albuquerque Land Holdings (WALH),a company set up by London-based Barclays and two other investors, is behind the proposed development. Its backers often point to multiple population projections—including a University of New Mexico study that projects a growth of 300,000 people in Bernalillo County by 2040 as well as a 2014 fiscal analysis by David Taussig & Associates on behalf of WALH that projects 93,000 people living in Santolina—as evidence that planners need to prepare for the future.

“It was mentioned that this county needs jobs, not sprawl,” John Salazar, an attorney for WALH, said at the meeting. “The interesting thing is Santolina will provide jobs, and it’s anti-sprawl.”

The comment drew laughs from many Santolina opponents present at the meeting, prompting Salazar to request the commission to ask for cordiality during the hearing. It was a sign of things to come.

Simply put, opponents are skeptical of WALH’s claim that Santolina will be self-sustaining and generate as much as 75,000 jobs.

Kelly O’Donnell, an economist who served as deputy secretary in the state Economic Development Department under former Gov. Bill Richardson, told commissioners that the Santolina master plan does not meet what she considers economic development.

Economic development, she argued, means bringing money from outside of a community into a community to create jobs. The only way Santolina meets that definition, O’Donnell said, is if it creates permanent jobs and if the infrastructure costs are taken on solely by the developer.

In other words, true economic development brings in more money to a community than it costs a community.

Instead, the Santolina master plan represents just “development,” she argued.

“There’s nothing wrong per se with development, but that’s all it is,” she said. “It doesn’t create jobs that actually improve the economy.”

Salazar later responded that Santolina’s master plan includes an entire section planning for new jobs that “we shouldn’t look down our noses on.”

O’Donnell argued that although current Santolina plans don’t call for subsidies, future ones most likely would. She said that after observing many debates over the years to develop Albuquerque’s West Side, the common theme was that “this land was not developable without a public subsidy.”

Salazar countered that just because there was “talk of a public subsidy in the past” doesn’t mean one is still on the table.

“The developer is committed to pay 100 percent of the infrastructure,” he said.

He also stressed that even if the county approves Santolina soon, population demand and not the development itself will create the growth. Developers maintain that total growth is 40 to 50 years out, and thus Santolina will phase in gradually.

Even so, Santolina’s planned housing of 90,000 people would put the development alone on par with current population levels for Rio Rancho, New Mexico’s third largest city.

The post originally said protesters were from the Southwest Organizing Project, but they were from the Contra Santolina Working Group. We regret the error.