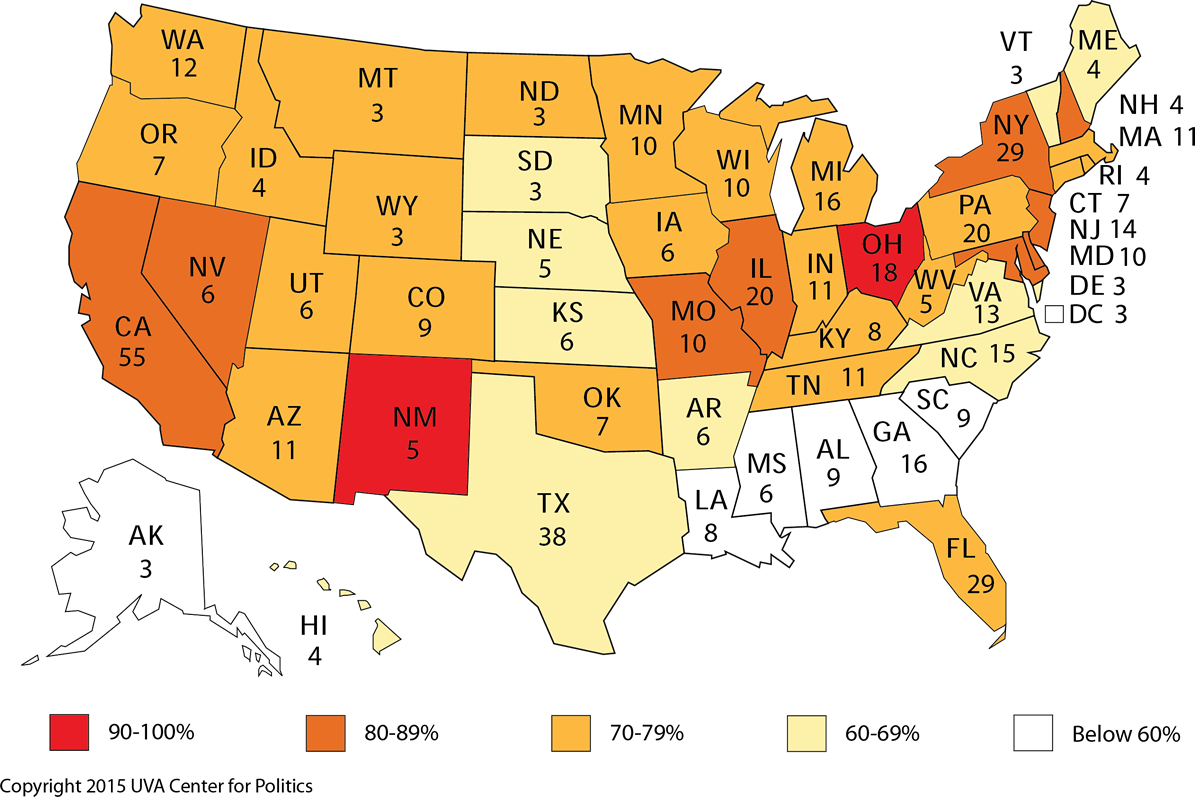 New Mexico has been one of the states that is happiest with the president who is elected, having voted for the winning candidate nearly every time in state history.

Larry J. Sabato’s Crystal Ball, named after the director of the University of Virginia Center of Politics which publishes the website, says that New Mexico and Ohio are two states to keep an eye on when determining which candidate will become the next president if the past is any indication. These are known as bellwethers.

Ohio narrowly edges New Mexico. Both have successfully voted for the winning candidate in all but two elections. But New Mexico is a newer state and so its record of 24-2 is 92 percent versus Ohio’s 28-2 record, or 93 percent.

The two states are the only states that have a percentage over 90 percent.

Ohio has company at the top though — it beats out another top presidential swing state, New Mexico, by only a hair. Like Ohio, the Land of Enchantment has also only been incorrect twice, but because statehood arrived in 1912, its record is just 24-2, and thus it has a slightly lower batting average (92%) than Ohio (93%).

One traditional bellwether that has dropped out of the top tier is Missouri which was famed for selecting the right candidate in nearly every election for a century, only missing 1956 when the state voted for Adlai Stevenson over Dwight Eisenhower. However, Missouri is trending more Republican than the nation as a whole and voted for John McCain and Mitt Romney in 2008 and 2012, respectively, when both candidates lost to Barack Obama.

States in the Deep South tend to be the worst predictors. Mississippi is at the bottom of the pack, voting for the winning candidate just 43 percent of the time.

In the early 1900s, most southern states voted for Democratic losers before turning Republican, while occasionally supporting third-party candidates in the middle of the century. Of the 11 states of the old confederacy, only two — Peripheral South states Florida and Tennessee — have correctly picked more than 70% of the presidential winners since 1896. Meanwhile, the only two states with a sub-50% mark in the last 30 elections are the Deep South’s Alabama and Mississippi.

But the long historical look may not be the best way to determine which states are true bellwethers; electorates are much different in 2016 than they were in 1912, when New Mexico became a state. And New Mexico has voted for the wrong candidate in more recent elections than some other states.

New Mexico’s misfires are more recent: in 1976 it narrowly backed Gerald Ford in his close loss to Jimmy Carter as well as Al Gore in 2000 over George W. Bush. The 2000 margin — only 366 votes — was closer in terms of raw votes than Florida (won by Bush by 537 votes). Also, one could credibly argue that New Mexico did reflect national sentiment that year — it picked Gore, who won the national popular vote — but we’re grading the states by their support of the Electoral College winner, which was Bush.

So what could be the best bellwether in 2016? Perhaps Virginia, which has been the closest to the percentage of the nation in the past two elections.

“It’s possible that because of demographic changes — Virginia’s electorate is more diverse than the nation as a whole — the Old Dominion’s time as a bellwether could be fleeting,” the website wrote.

This isn’t the first time that New Mexico has been in the conversation for bellwethers. In 2008, NPR looked at other types of bellwethers, down to the county level. Eddy County was one of six “all-or-nothing bellwethers” which are “states or counties that choose the national winner every time.” Eddy County dropped out of that category in 2008, however, when it chose McCain over Obama; the county chose Mitt Romney over Obama in 2012 as well.

NPR even produced a full story in 2008 on how Sandoval County is a swing county.

But two-thirds of the county’s voters live in a fast-growing suburban area in the south: Rio Rancho, just across the Rio Grande River from Albuquerque. This is where the Sandoval County vote — and maybe New Mexico’s — will be decided.

Obama won Sandoval County in both 2008 and 2012, though very narrowly in 2012. Rio Rancho is increasingly trending Republican and is an increasingly large percentage of the county’s population, which will make the 2016 elections interesting to watch in the county or to see if it becomes like Missouri: a former great bellwether that is a little more Republican than the electorate-at-large.