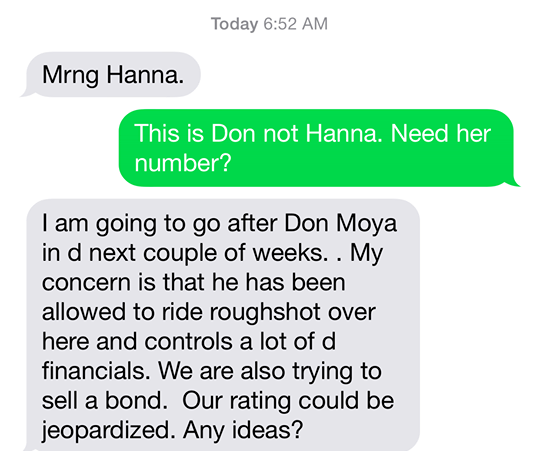 Don Moya, the Chief Financial Officer for Albuquerque Public Schools, remains on paid administrative leave today, according to district spokeswoman Johanna King. King would not speak about why Moya was placed on leave, saying it was a personnel issue.

Valentino begins the message by writing, “Mrng Hanna,” an apparent reference to Skandera.

“This is Don not Hanna,” Moya wrote back. “Need her number?”

Valentino apparently didn’t see this before sending out his next message.

“I am going to go after Don Moya in d [sic] next couple of weeks,” Valentino wrote. “My concern is that he has been allowed to ride roughshot [sic] over here and controls a lot of d [sic] financials. We are also trying to sell a bond. Our rating could be jeopardized. Any ideas?”

King wouldn’t comment on the text, but Moya said it’s authentic in a brief interview with New Mexico Political Report.

The text came to Moya early Friday morning. The school district put him on leave later that afternoon.

Moya wouldn’t divulge more specifics about the situation, noting that he’s currently in the process of securing legal representation.

Moya has been with APS for five years. Before that, he served as a deputy cabinet secretary in the state Public Education Department under former Gov. Bill Richardson’s administration.

Valentino stepped into the district’s superintendent position earlier this summer. Previously, he served as an associate superintendent in San Francisco’s public school district.

Read the text exchange below: