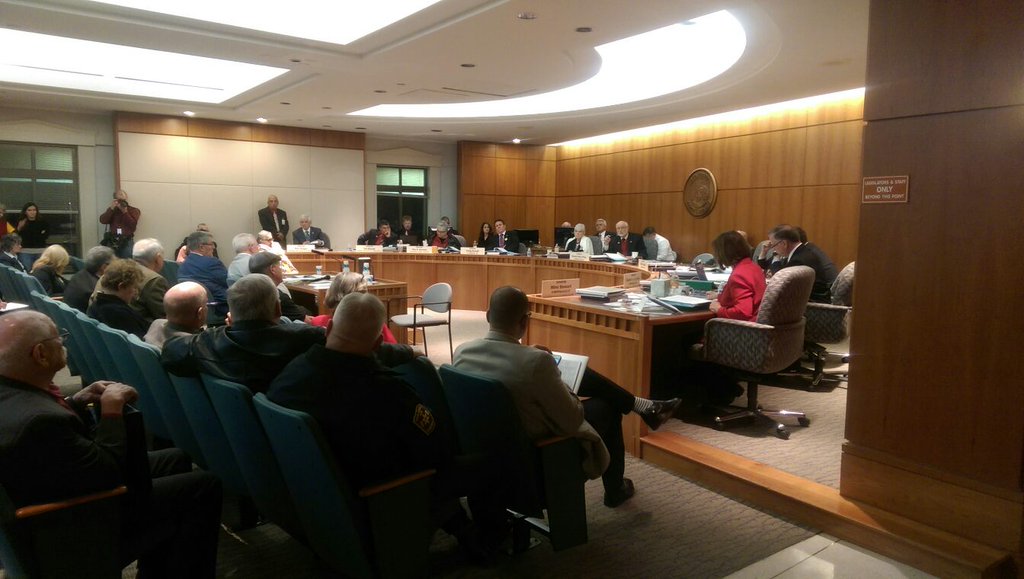 After a marathon hearing, the Senate Public Affairs Committee advanced a driver’s license bill that supporters hope will finally end the problem the state has been facing for years.

It didn’t come without controversy, in the form of an extensive amendment to the bill that passed the House, HB 99, to make it essentially a Senate bill, SB 256.

It was not a committee substitute, which would require it to go back through committees in the House. But with an amendment, if it were to pass the Senate, then the House and Senate could have a conference committee to work out the differences between the two versions.

The SPAC amendment passed on a party-line vote, with Democrats voting for it and Republicans against. Then, newly-amended HB 99 passed on an 8-1 vote.

SB 256 was sponsored by a bipartisan duo: Senate Minority Leader Stuart Ingle, R-Portales, and Sen. John Arthur Smith, D-Deming. The two also proposed the amendment, which Sen. Craig Brandt, R-Rio Rancho, said was unprecedented and he objected. He was lone vote against the passage of the bill itself.

The new version of the bill is essentially SB 256, which itself was similar to HB 99. While supporters say that both will be compliant with the federal REAL ID Act, there are some big differences between the two.

The new legislation does not require that those in the country legally have a REAL ID compliant card, as the original HB 99 did. In other words, citizens can choose if they want a REAL ID driver’s license.

The new bill also does not require fingerprints of those who are seeking the second tier, or driver’s authorization card. HB 99 required fingerprints from those getting a second-tier “driver’s privilege card.”

The amended bill also allows those with the second tier of card, whether they can prove legal status or not, to have that version for four years.

The original HB 99 allowed a driver’s privilege card for one year and required fingerprints for all who applied. The only people who would have been eligible for the second-tier version would have been those who could not prove they are in the country legally.

When the amendment came out, Rep. Paul Pacheco, R-Albuquerque, expressed that he did not appreciate the effort, saying repeatedly that it “is an unfriendly amendment.”

Pacheco declined to speak to NM Political Report after the hearing.

“The only time I’ve kind of seen something like that occurred with the film tax credit, hold-harmless bill at the end of my first session,” Sen. Ron Griggs, R-Alamogordo, said during the hearing.

“This is not just trying to pull a fast one,” Sen. Mimi Stewart, D-Albuquerque, said. “This is how you have to do it if you want to use the bill that passed through the House.”

Others said that it was not as big a change as HB 99 supporters said, saying that it was mostly minor changes.

When asked if he would be resistant to any amendments on his bill, he said that he would. This was before the large amendment was introduced. Pacheco was unaware of the amendment proposed by Ingle and Smith at the time.

“House Bill 99 in its current form does exactly what we need it to do,” Pacheco said. He said it would make the state REAL ID compliant, allow those who are in the country illegally to drive and would protect against fraud.

The committee room was full of those waiting to speak on the bill, many in opposition to HB 99. They waited in the room for hours; debate on a bail reform constitutional amendment lasted for hours.

Allen Sanchez, the executive director of the New Mexico Conference of Catholic Bishops, said that he wanted to encourage a “compromise” then noted that there was a bill with a Republican and Democratic sponsor in front of them; that was the bill sponsored by Ingle and Smith.

Taxation and Revenue Department Secretary Demesia Padilla said that the administration supported HB 99. She said it “is a very common sense approach to get New Mexico moving forward.”

Padilla was the expert witness for Pacheco’s bill, which was cosponsored by Rep. Andy Nuñez, R-Hatch.

Padilla also spoke out against the amendment, saying it was complex and that they needed time to look at it.

Griggs and Sen. Gay Kernan, R-Hobbs, proposed that SPAC take a recess so that members and sponsors could examine the amendment in full.

Sen. Daniel Ivey-Soto, D-Albuquerque, said that since Pacheco had said no matter how long he had to look at the bill he would not support it, that they should just vote on the amendment and the bill.

The other three driver’s license bills were kept on the committee’s table and were not acted upon. That includes SB 256.

If the state can show work towards compliance, then the restrictions will be pushed back.

Brandt has his own version, which was a straight repeal of allowing those who are in the country illegally to earn driver’s licenses.

“They do not want an alternative,” Brandt said, of his constituents. “They want a REAL ID-compliant license.”

Repealing the law was Gov. Susana Martinez’s position since being elected in 2010 until this year, where she indicated that she would support HB 99.