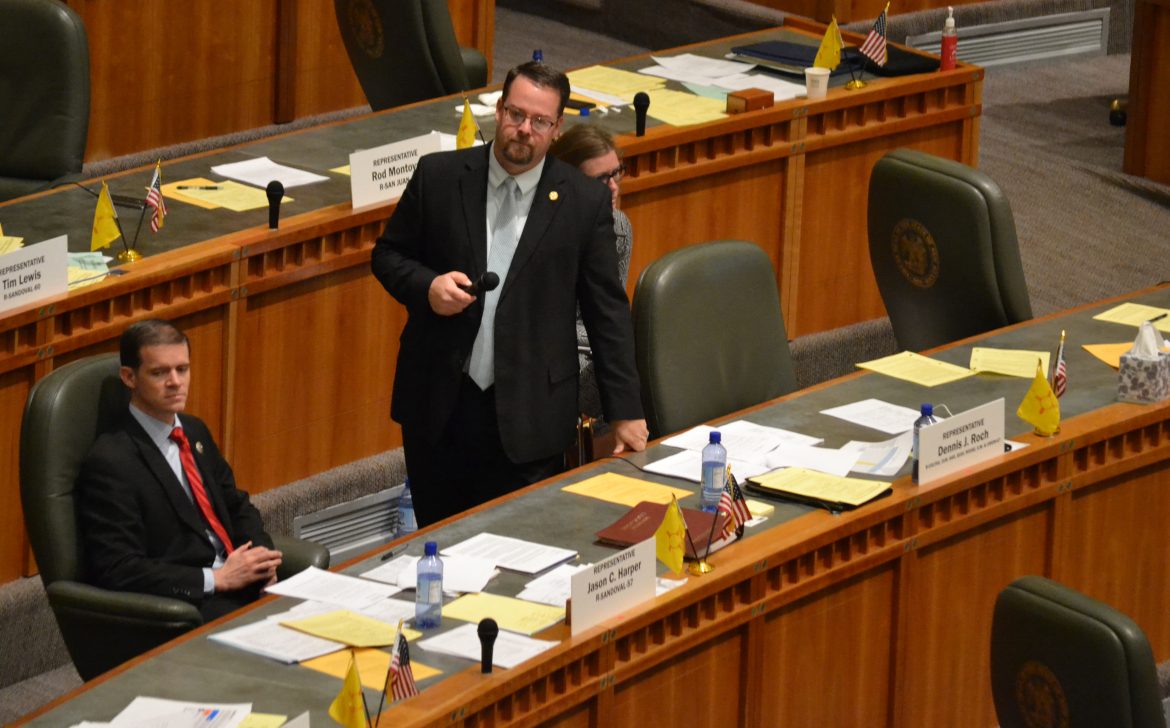 The House voted to pass a large bill related to budget cuts Wednesday night, sending the amended bill back to the Senate, who are expected to be back in the Roundhouse Thursday.

It took a full three hours of debate, largely on a large amendment put forward by Republicans.

Republicans, however, paused the debate and went into caucus for three and a half hours (Democrats held a shorter caucus at the same time).

The emergency clause is not necessary, according to Rep. Patty Lundstrom, D-Gallup, because it is an appropriations bill.

Deal with the Senate

“Gridlock cannot prevail here,” Gentry said. “Because if it does, government shuts down. We don’t have the money to write the checks for government functions.”

The amended version is similar to a proposal floated this over the weekend by the majority in the House Appropriations and Finance Committee. This proposal raises cuts to most state agencies to 5.5 percent instead of the 5 percent in the Senate version of the legislation.

Some areas were exempted fully from the cuts, like the Children, Youth and Families Department and the Department of Public Safety.

Bill McCamley, D-Las Cruces, during debate on a budget bill during the 2016 special session.

The proposal increased some cuts from the Senate version. The state Department of Cultural Affairs will see the 5.5 percent cut instead of 1.5 percent. And the Legislature itself will see a 3 percent cut, instead of the 2.5 percent in the Senate version of the bill. This would put the Legislature’s cuts equal to the cuts of the state’s Judicial branch, according to Rep. Dennis Roch, R-Logan, who sponsored the House amendment.

Gentry’s stated  deal with the Senate left cuts to higher education at 5 percent instead of the 5.5 percent originally floated.

House Democrats heavily criticized the amendment, with legislators taking aim at cuts to various areas. Only two Republicans debated on the bill.

Egolf noted that the AG houses a unit that investigates internet child pornography and is also prosecuting the alleged killer of Albuquerque police officer Daniel Webster.

“It’s easy for this body to forget, it’s the Attorney General’s Office that takes over those prosecutions,” Egolf said.

Call of the House

House Majority Leader Nate Gentry, R-Albuquerque, leaving the chambers during a Call of the House.

There was controversy about the call of the house beyond Youngblood failing to vote initially.

Rep. Eliseo Alcon, D-Milan, criticized Gentry and Speaker of the House Don Tripp, R-Socorro, for leaving the House during the Senate.

“We had to sit here while you guys went around and played your little games,” Alcon said.

“I think you and the Majority Leader owe this House an apology,” Alcon said. “You made us sit here for three hours while you were out there fiddle-faddling or whatever.”

“I apologize that you did not include you in our games,” Gentry replied.

“It is a special session and we’re trying to work through this,” Tripp explained.

Democrats also criticized House Republicans for focusing on crime bills rather than the budget during the opening days of the legislative session.

“The Senate, within a matter of hours, sent over a number of budget solvency bills,” Rep. Javier Martinez, D-Albuquerque, said. “And by most accounts, widely bipartisan proposals that were sent our way.”

“We conceded a lot of power on the Senate,” Rep. Antonio “Moe” Maestas, D-Albuquerque, said of budget bills that usually originate on the House side.

“The House majority had different priorities,” he said.

The House voted early Thursday morning to pass a tax package. There was no debate on the actual bill, though there was debate earlier in the week before the sponsor, Rep. Jason Harper, R-Rio Rancho, pulled the bill for more discussion.

McCamley withdrew a proposed amendment to the bill.