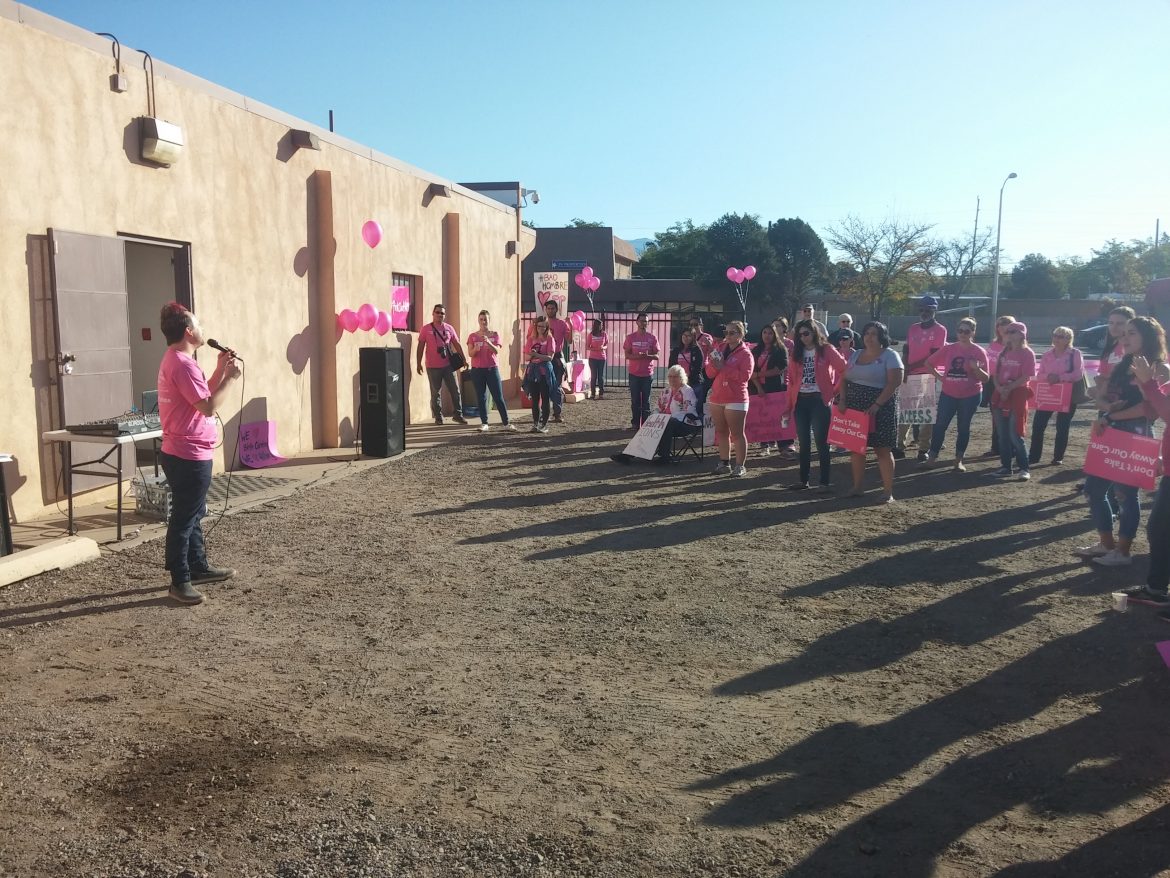 Marshall Martinez, left, speaks to supporters at a Planned Parenthood "Pink Out the Vote" rally on Saturday, Oct. 29, 2016.

A crowd of supporters wearing pink gathered at the Planned Parenthood clinic on San Mateo Boulevard in Albuquerque Saturday morning in anticipation of a day of canvassing in the North Valley.

“On Nov. 8, pussy grabs back, and we’re not afraid to say it,” Marshall Martinez, public affairs manager of Planned Parenthood Votes New Mexico, said to a cheering crowd in a reference to Donald Trump’s infamous 2005 hot mic video leaked from Access Hollywood earlier this month.

The rally and day of canvassing is part of a larger “Pink Out The Vote” sponsored by Planned Parenthood across the country.

“We know what’s at stake,” New Mexico Democratic Party Chairwoman Debra Haaland said at the rally. “If Donald Trump gets into office, the first thing he’s going to do is axe funding for Planned Parenthood.”

Organizers didn’t just speak about the top of the ticket but also they emphasized down-ballot races, noting that anti-abortion bills recently passed state legislatures and became law in states like Texas. Locally, the political action committee of the women’s health provider is targeting four state legislative races in Albuquerque and Las Cruces.

On Saturday, Planned Parenthood hoped to knock on 2,000 doors and make 3,000 phone calls in the North Valley district where state Rep. Sarah Maestas Barnes, a Republican, is seeking reelection.

Planned Parenthood endorsed Maestas Barnes’ opponent, Democrat Ane Romero. Canvassers emphasized Maestas Barnes’ 2015 votes for legislation that would ban abortions after 20 weeks of pregnancy and require minors to receive consent from their parents before getting abortions.

Among the Albuquerque canvassers was Teresa Lechuga, an 11th grade student who said she’s been volunteering with Planned Parenthood for the last year.

“I want to let people know what’s going on,” she said.

Martinez added 30 volunteers were canvassing in Las Cruces on Saturday as well.

Apart from elections, speakers at the rally also talked about issues women face.

DeChellie Gray, co-president of Students for Reproductive Justice at the University of New Mexico, cited the statistic that one out of three Native American women will experience rape in their lifetime.

Jessica Montoya, a coordinator of One Billion Rising, referenced the federal government’s forced sterilization of Native American women in the 1970s. She added that “the struggle for women to have sex recreationally, not just procreationally, has been ongoing.”