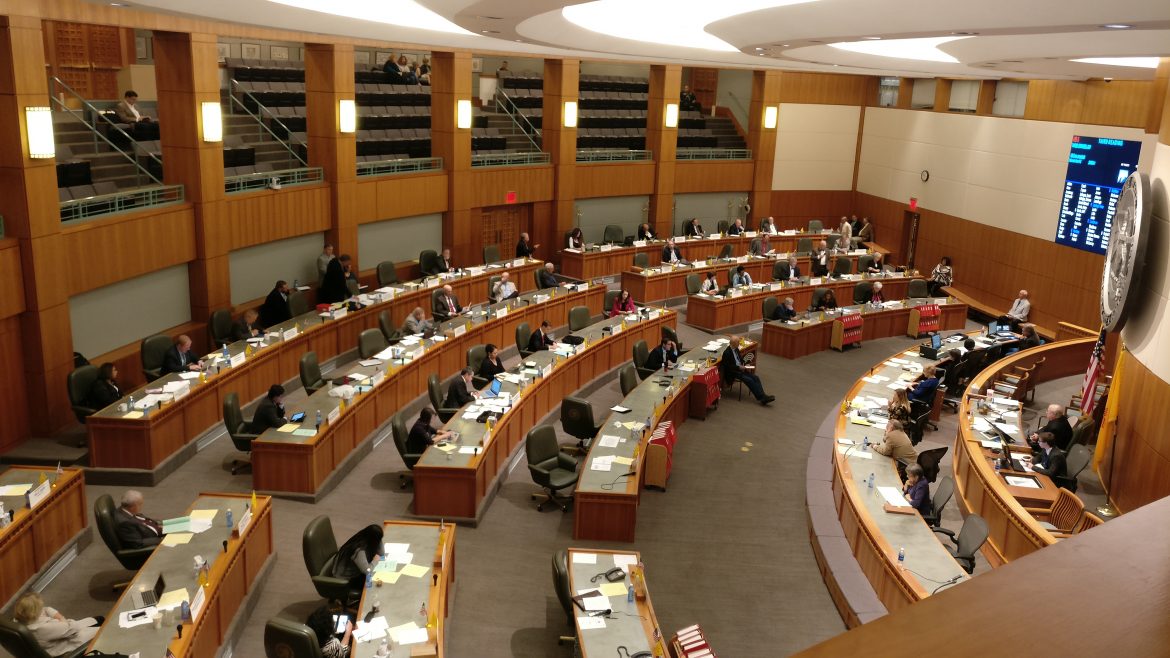 The House floor, where the abortion bills were heard.

The biggest issue for legislators this session is New Mexico’s perilous financial situation—and how they plan to fill a projected $67 million budget deficit.

This piece also appeared in this week’s edition of the Weekly Alibi.

Martinez, in a prepared statement last week, called her plan “responsible” and lobbed criticisms at the state Legislature for not previously “making tough choices” on the budget.

Sen. John Arthur Smith, D-Deming, chair of the powerful Senate Finance Committee, criticized her proposal in an interview this month, saying he’s “not as harsh” as Martinez on public education and arguing that she “has a disdain for state employees.”

The dueling budget proposal to Martinez’s plan is from the Legislative Finance Committee.

This plan would balance the deficit by cutting some public education funding, delaying public projects and decreasing Medicaid funding. The LFC recommendations also include new taxes on health services.

Martinez and state lawmakers will have to come up with an agreement in the 60 days of the session, which started on Tuesday, Jan. 17.

Beyond the budget, several proposals this session will get plenty of attention.

Among them are reforming the state’s tax system, which Reps. Jason Harper, R-Rio Rancho, and Bill McCamley, D-Mesilla Park, took the lead on during interim committee hearings last year.

Both lawmakers spoke publicly during the final weeks of 2016 about overhauling the state’s complex gross receipts tax (GRT) system. Specifically, they’re focusing on eliminating the hundreds of exemptions and deductions to the tax.

Harper, in an interview in December, talked about getting rid of taxes on “business-to-business” services. He used the example of a grocery store owner getting taxed on paying an accountant to prepare company taxes.

“If you have a small business and you hire an accountant or a lawyer or any kind of service that you need to help with your business, we tax that here in New Mexico,” Harper said. “And that is very weird and very strange and that cost gets rolled into everything else.”

Yet most media outlets focused on the most controversial part of their idea—reinstating a tax on food.

Denunciations from groups like New Mexico Voices for Children, Think New Mexico and the New Mexico Catholic Church came often and loud in December, putting the likelihood of a massive overhaul into doubt for now.

Neither Harper or McCamley had yet filed any tax reform legislation as of press time this week.

Democrats’ retaking control of the House of Representatives and increasing their hold on the state Senate will pave the way for other types of reform measures. McCamley filed a bill to legalize recreational marijuana use while Sen. Gerry Ortiz y Pino, D-Albuquerque, is expected to once again propose an amendment to the state constitution that would do the same.

Ortiz y Pino’s measure would bypass a signature or veto from Martinez and bring the issue directly to New Mexico voters in an election.

Both lawmakers have carried similar bills in the past, and Ortiz y Pino’s measure made it through two committees and onto the Senate floor last year before getting killed. He’s hopeful it will go further this time.

Some legislators have said they don’t believe placing it in the state constitution is an appropriate way to legalize recreational marijuana.

Some lawmakers are also looking at opening up the state’s Medical Cannabis Program to more patients. Sen. Cisco McSorley, D-Albuquerque, has introduced legislation that would add opioid addiction to the list of qualifying medical conditions for medical cannabis patients. He also wants all veterans to be able to have access to the program no matter their medical conditions.

McSorley’s bill comes with the backing of cannabis producers in New Mexico, as well as cannabis patients’ alliance groups.

“This is a patient’s bill first and foremost,” McSorley said in an interview this month.

Another priority among Democratic lawmakers will be to raise the state’s minimum wage, which is currently at $7.50 an hour and hasn’t seen an increase in eight years. Sen. William Soules, D-Las Cruces, is aiming to up the minimum wage to $8.45 an hour. But Rep. Patricia Roybal Caballero, D-Albuquerque, wants it increased to $15 per hour. That’s the the number often associated with “living wage” advocacy movements across the country.

“Anything lower than that at this point is an insult to the working poor,” Roybal Caballero said in an interview this month. “The poor can’t continue to wait. Creditors don’t wait, landlords don’t wait, inflation doesn’t wait.”

It’s unclear whether Martinez would be willing to sign a minimum wage increase this year. In 2013, she said she supported raising the minimum wage to $7.80. The next year, she supported upping the wage to $8 per hour without an automatic cost-of-living adjustments attached.

The state’s public records law could also see changes this year, with a powerful senator looking at exempting job applications for public positions from the state Inspection of Public Records Act. Senate President Pro Tem Mary Kay Papen, D-Las Cruces, said in an interview that “people should be able to apply for a job without having their name on the front page of the newspaper if they’re not a finalist.”

Papen’s bill is drawing opposition from government transparency advocacy groups like the New Mexico Foundation for Open Government and the Rio Grande Chapter of the Society of Professional Journalists.

“Enacting this type of legislation would create an environment ripe for cronyism which has never served the citizens of this state well,” Peter St. Cyr, the group’s executive director, said in an interview.