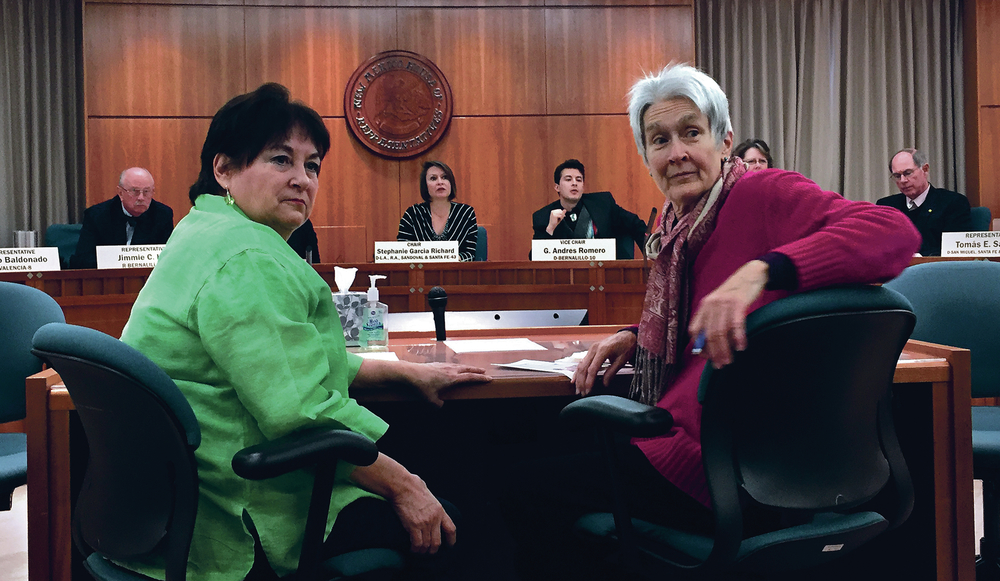 State Rep. Christine Trujillo, D-Albuquerque, left, and Baji Rankin, executive director of the New Mexico Association for the Education of Young Children attend a House committee hearing Wednesday for a bill that would provide $2 million in professional development funds for preschool teachers. The House Education Committee voted unanimously to advance the measure.

A measure that would provide $2 million in tuition assistance for preschool teachers to further their education advanced in the state House on Wednesday, with unanimous approval from lawmakers on the Education Committee.

The money, which would come from the state’s general fund, would help retain early childhood educators and allow them to command higher wages, said the bill’s sponsors, Rep. Christine Trujillo, D-Albuquerque, and Rep. Rebecca Dow, R-Truth or Consequences.

“This is directly tied to the quality of [the early childhood education] staff,” Dow said during Wednesday’s hearing on House Bill 135. She said the vast majority of educators who would benefit from the bill are women and minorities.

A 2016 report by the U.S. departments of Education and Health and Human Services said preschool teachers in the U.S. earn an average of $28,570, far less than the average salary of a kindergarten teacher — over $51,000 — and less than the wages of waiters, janitors and pest-control workers.

As a result, said Baji Rankin, executive director of the New Mexico Association for the Education of Young Children, retaining early childhood educators is a challenge.

House Bill 135 calls for the state Children, Youth and Families Department to contract with early childhood organizations in the state to distribute the scholarship funding to working educators who aim to achieve a higher level of training and certification in their field.

All told, the bill could affect about 950 teachers, Rankin told lawmakers on the House Education Committee.

“A diversified early education workforce needs both education and compensation increases,” she said.

Two joint resolutions working their way through the Legislature would amend the New Mexico Constitution to allow voters to decide if they want the state to draw an additional 1 percent of investment revenues from the multibillion-dollar Land Grant Permanent Fund to pay for an expansion of early childhood programs.

Dow told the House Education Committee that if those resolutions pass, the state will need to hire thousands more prekindergarten teachers to meet the demand for more early childhood services, and this bill would help in the recruitment effort.

Several people in the committee room spoke in favor of the bill. Only one person — a representative of the state Public Education Department — spoke against it.

Trujillo also asked the committee to table a similar bill she was proposing that covered much of the same ground. The committee granted her request.