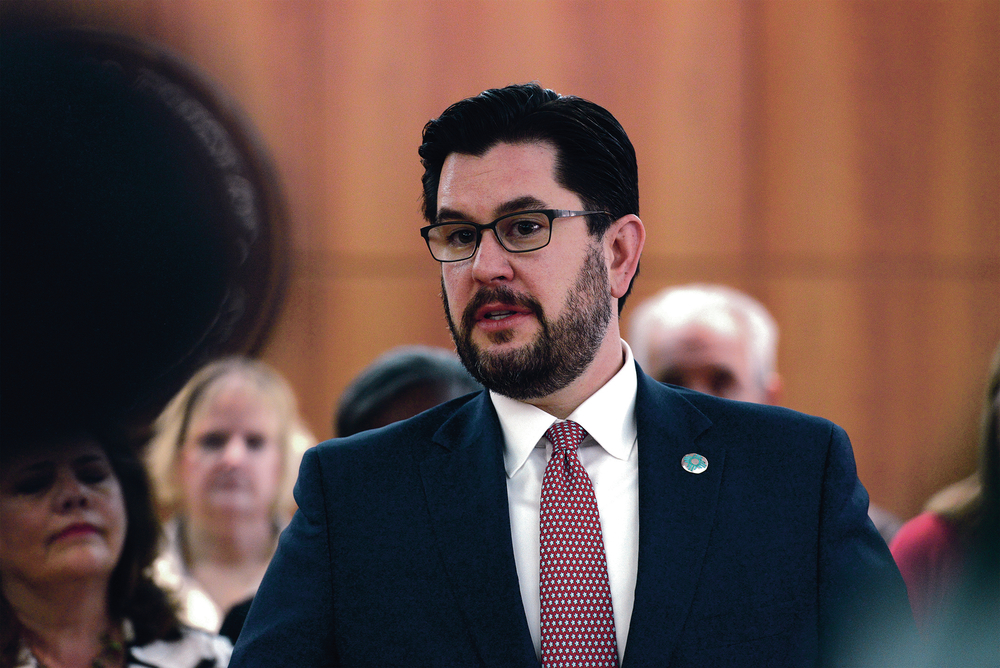 Speaker of the House Brian Egolf, D-Santa Fe, and House Democrats held a news conference Thursday at the Capitol to unveil a revenue package aimed at generating new money for state government.

With the state still running a deficit and reserves depleted, Democrats in the New Mexico House of Representatives have identified four tax or fee increases they say would prevent more cuts to education and put the state on better financial footing.

The initiatives — taxing all internet sales, raising the permit fee on heavy trucks, closing a loophole that benefits nonprofit hospitals and increasing the tax on vehicle transfers — could raise more than $200 million in ongoing revenue. Some of it would go to avoid cuts in state agencies and some to beef up reserves.

The move to bring together the House Democratic caucus came on the same day as state economists restated a revenue forecast from December that shows the economy has stabilized but reserves are far below the desired level of $300 million, or 5 percent of recurring revenue.

The reserve account for the $5.6 billion budget at the end of the fiscal year on June 30 is projected at 1.6 percent. “It is the lowest projected ending reserve level in at least 15 years,” Jon Clark, chief economist with the Legislative Finance Committee, told lawmakers.

Economists said it will take $93 million in new money to maintain services at the current level without cuts, but there was no estimate of the deficit for fiscal year 2018 because there is not yet an approved budget. Democrats estimated they will need between $200 million and $250 million more in ongoing revenue or spending cuts to bring reserves up to about 3 percent, the minimum needed for emergencies.

Lawmakers have used unconstitutional deficit spending for the past two years, and had to return for a special session in October to cut more spending and tap unspent accounts, actions that balanced some $600 million.

Again in January they spent the first week of this session making more cuts and transfers to wipe out a $67 million deficit for this year.

“It seems like, in a nutshell, where we are is where we’ve been,” said Sen. Nancy Rodriguez, D-Santa Fe, a member of the Senate Finance Committee. “It’s sad we’re not in any better situation than we were [after the special session].”

“I’m cautiously optimistic,” Smith told his committee. “I find this to be the first time in many, many years, we’re hitting the point that maybe we’re seeing some stability that we need to see before we see a real uptick.”

He said the proposals will be amended into House Bill 202, the internet sales bill, that is to be heard Monday in the Taxation and Revenue Committee.

“This is the way out,” said Rep. Carl Trujillo, D-Santa Fe, acting chairman of the committee. “It’s the reasonable thing to do.”

Senate leaders are also moving on proposed new taxes and fees, including a boost in the statewide gas tax and raising some income tax brackets for investment earnings.

One notable obstacle is Republican Gov. Susana Martinez, who has promised not to raise taxes during her term. But Martinez signed two bills after the special session that closed tax loopholes. An economist told lawmakers Thursday that will save the state an estimated $100 million in the next two years, and is one reason the revenue picture is not a lot worse.

Egolf said the measures backed by the House majority fall into that category. “This is what the governor has indicated she wants to see,” he said.

But Michael Lonergan, a spokesman for Martinez, said she does not necessarily agree.

“It’s simply out of touch that legislators would protect their pork projects and personal legislative retirement accounts, while at the same time asking New Mexicans to shell out more on their cars and gas,” he said. “The governor is open to true tax reform, but she will not let lawmakers bail out Santa Fe on the backs of our families.”

The measures supported by House Democrats include:

o Closing the loophole that exempts internet and catalogue companies that don’t have a physical presence in the state from paying gross receipts taxes. Analysts estimate the change could raise $20 million to $40 million.

o Realigning the tax classifications for hospitals and clinics so all for-profit and nonprofit facilities pay the same 2 percent gross receipts tax on services. This could raise $65 million.

o Increase the transfer fee on new and used vehicles from 3 to 4 percent of the purchase price, minus any trade-in dollars.

o Increases the fee on heavy truck permits, paid annually by owners, from $5 to $90 a year to raise $63 million.

Some House Republicans have said they would vote for the Internet sales tax and the effort to expand the gross receipts tax to more health care services.