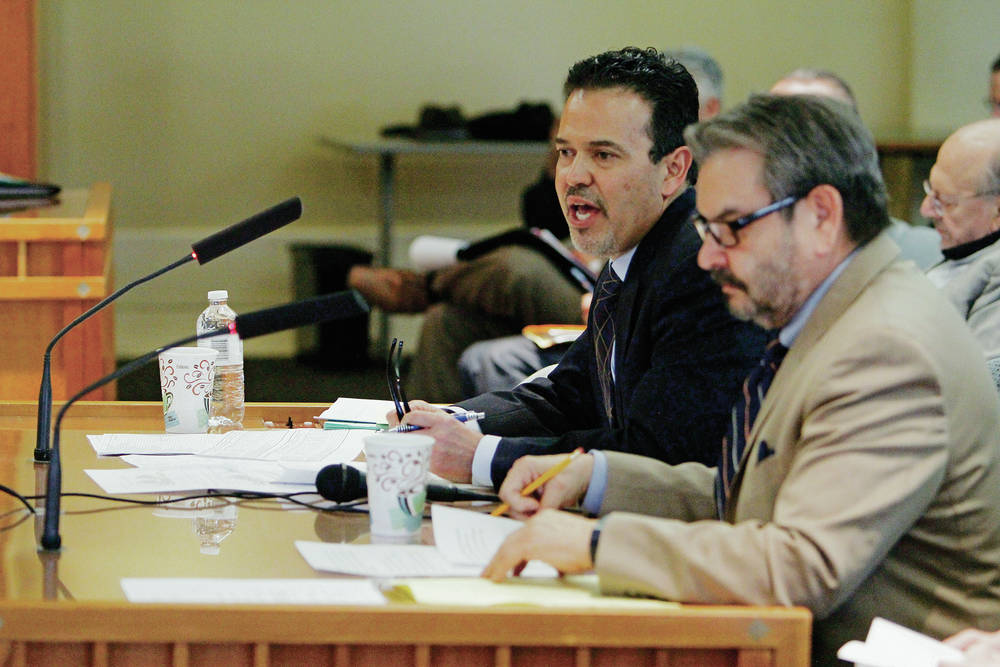 State Rep. Carl Trujillo, D-Santa Fe, and Sen. Carlos R. Cisneros, D-Questa, speak to the Senate Finance Committee on Thursday about House Bill 202, which calls for new taxes and fees. The committee is expected to vote Friday on the 2018 spending bill and a package of revenue proposals.

Members of the Senate Finance Committee say they have reached an agreement on a package of taxes and fees that would help New Mexico resolve its projected budget deficit and shore up cash reserves to about 3 percent next year.

The proposal amends several provisions of House Bill 202, including a tax that was opposed by doctors and hospitals. The Senate measure also would incorporate a gasoline and diesel tax increase that has already passed the Senate as a separate bill.

By bringing all the elements together, Sen. John Arthur Smith, D-Deming, the finance chairman, hopes to stabilize the $6.1 billion general fund and guard against further credit downgrades. It also would buffer the state against expected federal cuts in education and health care.

“We’re looking at some pretty strong headwinds going forward,” Smith said. “Hopefully we can come up with a package that gives us some stability on the revenue side.”

The committee discussed the changes Thursday, and a vote on both the tax bill and the fiscal year 2018 budget are scheduled for Friday. With the changes, HB 202 would bring in $350 million. Of that, $143 million would go to general fund spending; $26 million to increase Medicaid payments to smaller hospitals; $55 million to state and local road projects; and the remaining $126 million are earmarked for cash reserves.

If all the measures are signed into law by Gov. Susana Martinez, something that is unlikely, an analysis indicates cash reserves would more than double to 5.2 percent by the end of fiscal year 2019. Reserves now stand at $90 million, under 2 percent of the budget, the lowest balance in decades. State revenues have declined partly because of lower crude oil prices.

The depletion of the emergency fund has led one credit agency to downgrade New Mexico’s credit rating.

Both the spending bill and HB 2, the overall state budget, would then have to be approved in the full Senate and go back to the House of Representatives before heading to Martinez for her consideration. The 60-day legislative session ends March 18.

Among the changes is that HB 202 would be amended to make specific disbursements to assist with road repairs and Medicaid, and that makes it an appropriations bill. Martinez has authority in appropriations to make line-item vetoes, and senators have no doubt she will do that.

But by offering her administration a mix of tax and fee hikes, they are confident she will approve some of the measures and avoid calling lawmakers back for a special session before the start of the next fiscal year on July 1.

“We think we have some things in there she can support,” said Sen. Steve Neville, R-Aztec.

Smith said his committee heard from administrators at small hospitals around the state about potential negative effects of the House bill.

The Senate’s proposal would strip out all providers except hospitals, which have agreed to be taxed if a portion of the dollars went to support Medicaid, the government insurance program that covers 40 percent of New Mexicans. With the Senate amendments, the hospitals would pay about $80 million a year in taxes, down from $110 million. But $26 million would be dedicated to increasing Medicaid reimbursements in hospitals with 100 beds or fewer.

Trujillo said House members knew about the concerns but wanted to move a bill forward. “The goal was to find some compromise that would work for everyone,” he said.

The bill also extends the gross receipts tax to all internet sales, suspends some contributions to the legislative retirement fund, and boosts the tax on the sale of a vehicle.

Another aspect of the revenue bill could be changed. The House bill increased the permit fee for some 700,000 trucks that pass through the state annually from $5.50 to $90. The Senate proposes to reduce the fee to $55 a year.

“I think we’re going to get pretty broad support for this on the Senate floor,” Smith said. Democrats control the Senate 26-16.

Senators previously voted 29-13 to increase the state gasoline tax for the first time in 20 years. But Martinez, a Republican, said through a spokesman that she would veto that measure.

Another tax package that resets the complicated gross receipts tax laws by eliminating most credits, deductions and exemptions starting July 1, 2018 cleared the House on Wednesday. House Bill 412 is to be heard Saturday in the Senate Corporations Committee.

Rep. Jason Harper, R-Rio Rancho, is the sponsor. He said if most of the state tax loopholes are eliminated, the overall state gross receipts tax rate can drop significantly, to just over 3 percent. The measure would end hundreds of tax exceptions for business in dozens of industries, but is designed to be revenue neutral, meaning it would not bring in more money for the state long term. A financial analysis of Harper’s bill was still being prepared as of Thursday afternoon.