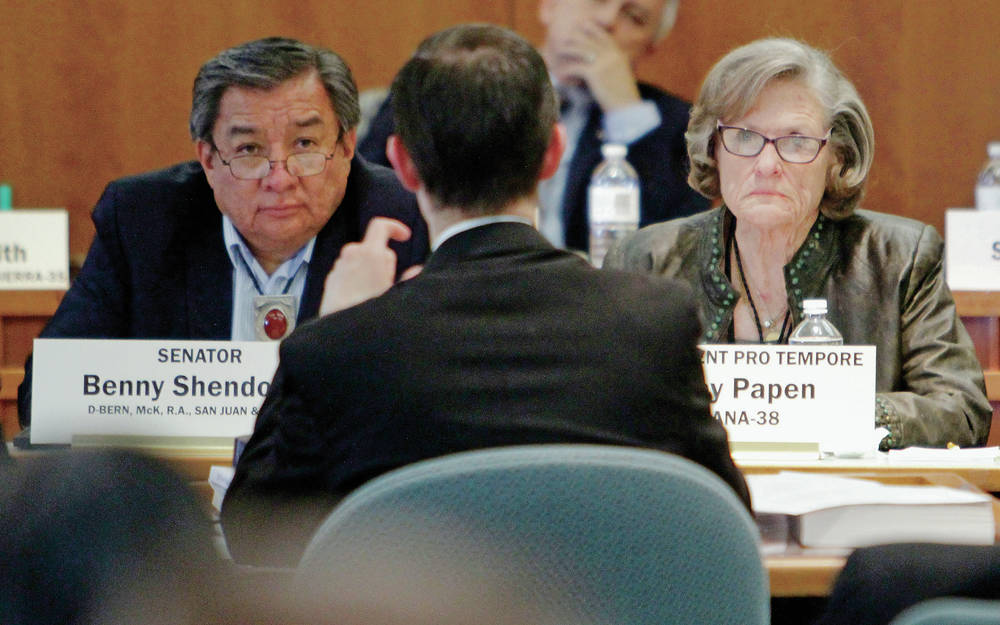 Sen. Benny Shendo, D-Jemez Pueblo, left, and Sen. Mary Kay Papen, D-Las Cruces, listen to Rep. Jason Harper, R-Rio Rancho, discuss House Bill 412, a tax reform measure. No action was taken on the massive bill, which passed the House on a unanimous vote but faces challenges in the Senate as the session draws to a close.

A wide-ranging tax bill that passed the House of Representatives in a unanimous vote ran into obstacles at a Senate hearing Wednesday and isn’t likely to advance in the 2017 Legislature.

“Anything still has a chance of moving,” said Sen. Clemente Sanchez, D-Grants, chairman of the Senate Corporations and Transportation Committee, after a four-hour hearing on House Bill 412, sponsored by Rio Rancho Republican Rep. Jason Harper.

But during the hearing, lawmakers were more skeptical as they heard concerns from lobbyists for doctors, hospitals, broadcasters, nonprofit organizations, schools, farmers, the dairy industry, hospice nurses and nursing homes about how the tax changes would affect their operations.

Harper was not surprised. “We’ve jokingly called this bill the lobbyist full-employment act. I do understand why this room is filled behind me,” he said Wednesday.

The bill eliminates more than 100 deductions and credits for the state gross receipts tax, many of which have been been approved by lawmakers going back 30 years. In exchange for broadening the tax base, the statewide rate for all transactions would then fall from over 5 percent to under 3.5 percent.

But every tax break is in state law because a lawmaker wanted it there. And even though Harper said he has drafted changes in the bill to alleviate many of the concerns, those are not likely to be heard: The legislative session ends Saturday, and the 332-page bill would take hours more of committee time to amend.

“It’s hard to swallow when we have three days left in the session,” said Sen. Howie Morales, D- Silver City.

Rep. Jason Harper, R-Rio Rancho, speaks during a joint hearing Wednesday of the Senate Corporations and Transportation Committee and Senate Finance Committee about House Bill 412, a tax reform measure. No action was taken on the massive bill, which passed the House on a unanimous vote but faces challenges in the Senate as the session draws to a close.

For lawmakers, who have faced a fiscal crunch in the past two years, the bigger issue was the lack of certainty in how changes in the gross receipts tax collections would impact their ability to pay for government services. The tax accounts for more than 40 percent of the $6.1 billion general fund, which pays for public education and day-to-day operations.

“It’s a massive bill,” said Sanchez, who spent 15 hours reviewing it over the weekend. “It could have serious repercussions.”

“I can say there are an awful lot of House members who were surprised when they heard what’s in this bill,” Smith said.

Among those that pay no taxes now but would be taxed under the measure are nonprofit organizations and public schools that purchase materials, computers and other supplies.

Dan Weeks a lobbyist for the New Mexico Hospital Association, recited the increased cost for every hospital in each legislative district that had a member at the hearing: $7.6 million for hospitals in Smith’s district; $11.4 million in Sen. John Sapien’s district; $23.9 million for facilities in Santa Fe represented by Nancy Rodriguez, and on and on.

“These are large hits in your community. I don’t think your hospital will be able to support it,” Weeks said.

Terri Cole of the Greater Albuquerque Chamber of Commerce said she and other business leaders have served on tax reform panels almost every year for a decade. “None have been successful,” she said.

Harper’s bill is not perfect, she said, but it offers the best chance to reform New Mexico’s gross receipts tax structure. “The only way we can do this is with a comprehensive bill.”

Gov. Susana Martinez also signaled to lawmakers that she wants to see tax reform move forward as a way to attract businesses to the state.

But by Wednesday, cooperation between Gov. Martinez and lawmakers had gone off the rails, and talk of bipartisan solutions seemed secondary to more contentious issues, such as the governor’s veto of several Democratic bills, the lack of agreement on new revenue for the 2018 budget and the Senate’s first override of a Martinez veto.

And so, Smith’s final comment on the tax-reform effort could easily apply to the final days of the session. “We’ve got a hill to climb,” he said. “It’s a mountain for some of us.”