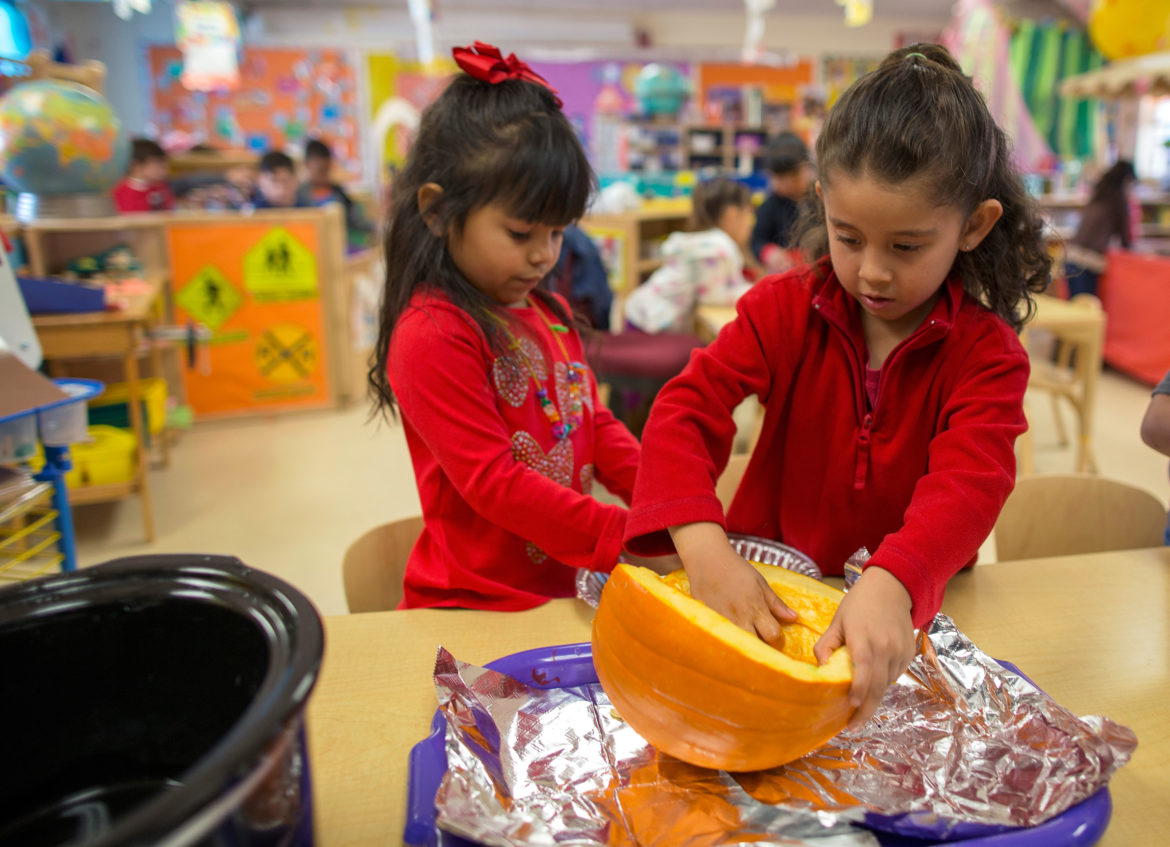 The fence serves as a literal and symbolic divide segregating two sets of classrooms outfitted with the same child-size tables, chairs and toys; two sets of highly trained teachers; two separate playgrounds — and a bitter competition for 4-year-old children.

As New Mexico has expanded early education for toddlers over the past decade, the state has created a system that bars providers from mixing state and federal funds in the same classroom. It’s a policy – not a law – that effectively separates kids into rival programs, often divided by income.

Instead of cooperating, state and federal programs are competing. One of the consequences is that New Mexico taxpayers are shouldering more of the cost of paying for preschool programs, while federal money is being sent back to Washington even as thousands of needy children go unserved.

“We have this crazy quilt pattern of some private day care for 4-year-olds, public preschool for 4-year-olds and federal Head Start programs that are all in competition,” says Fred Nathan, executive director of Think New Mexico, a Santa Fe-based think tank focused on issues of child well-being. “Trying to create a coherent system is a little bit like trying to put the toothpaste back in the tube.”

An investigation by Searchlight New Mexico found multiple instances of federal preschool programs, known as Head Start, losing money or slots for kids. At the same time, the state is paying to educate more 4-year-olds in pre-Ks in private child care centers or elementary schools.

A Head Start program in Doña Ana County returned $75,000 to Washington in 2015. In the two years following the startup of state pre-K in 2005, a Las Vegas program sent back $850,000. Around the state, Head Start directors say, hundreds of thousands of dollars have been lost over the past decade, with millions at risk.

“I’ll be the first to say we need state pre-K,” said Joseph Griego, who runs Head Start at the West Las Vegas School District. “But what I can’t understand is why we as a state can’t seem to collaborate together to be able to serve the children, specifically in counties where Head Start programs are established. It shouldn’t be a competition.”

Some Head Start administrators have scrambled to “convert” 4-year-old preschool slots to programs for younger kids, which can be more expensive. Presbyterian Medical Services’ Head Start north of Albuquerque lost 56 slots last year; the Las Vegas program relinquished 60 slots in 2014; Albuquerque’s YDI also gave up about 140 slots over the past four years.

Once the federal money or slots are lost, they’re gone for good.

“We had been hearing concerns about the funding for 3- and 4-year-olds,” says Michael Weinberg, early childhood education policy officer at the Thornburg Foundation in Santa Fe. “Are those different funding streams competing with each other? Were we reverting federal funds?”

The answer to both questions was “yes,” according to a 2017 study funded by Thornburg. The study found that collaboration between state and federal preschool programs is “inconsistent and fragmented.”

The mistrust between them dates back years. It sharpened in 2013, when the state issued a damning report on Head Start based on data compiled from three of 35 providers. The Legislative Finance Committee requested data of all Head Start programs but most didn’t comply; numerous providers told Searchlight they worried how the data would be used.

The LFC report cast doubt on whether Head Start improved school readiness and recommended that the state assume oversight and control of Head Start funds, which go directly to providers.

Not all studies share that opinion, however. In 2017, the Albuquerque Public Schools looked at one of the state’s largest Head Start programs, YDI. It concluded that the program improved students’ rates of attendance and early reading and math skills into second grade – despite the extreme poverty many Head Start kids face.

While the rate of child poverty has risen in New Mexico over the last decade, Head Start now serves some 600 fewer kids than it did 10 years ago, according to the National Institute for Early Education Research.

During the same period, state pre-K enrollments have grown. Yet the state isn’t serving all its kids. Not even the neediest. Nearly half of 4-year-olds and more than three-quarters of 3-year-olds in New Mexico aren’t attending any kind of preschool program, according to the NIEER.

“We want to use federal funds first,” said Debra Baca, vice president of YDI Early Childhood Services, which administers both federal and state pre-K programs. “And we need to make sure that certain communities aren’t being saturated while others are left unserved.”

Neuroscientists know there is a critical window in development between birth and age 5 that can determine a child’s chances of success later in life. The enrichment babies and toddlers get – or don’t – plays out in myriad ways, including school attendance, test scores and graduation rates.

Hoping to close a stubborn achievement gap between low-income children and those from higher-income families, the Legislature approved funding for preschool programs in 2005.

The state set up a system of grants to daycare providers through the Children, Youth and Families Department as well as to schools through the Public Education Department. And the pot of money began to grow – to $54 million in fiscal 2018, more than double four years earlier.

The number of preschool children served by the state expanded to about 8,400.

Meanwhile, Head Start had already been around for decades. The program dates to 1965 and President Lyndon B. Johnson’s War on Poverty. It specifically targets children living at or below the federal poverty level, about $24,600 a year for a family of four.

“Head Start was an early acknowledgement that children from low-income families did not start their public schooling on equal footing with their more affluent counterparts, and that high-quality early learning could provide a crucial support,” stated a 2016 report by the University of New Mexico’s Center for Education Policy Research.

Head Start sent $85.6 million to New Mexico in fiscal 2017, including more than $18.5 million to tribal pre-K programs, according to the U.S. Administration for Children and Families.

The program served 7,300 kids in New Mexico last fiscal year, down 7 percent from a decade ago, according to the administration.

While Head Start shrinks in New Mexico, other states and localities have found ways to create high-quality preschool programs for all or most 4-year-olds using those federal funds. Oklahoma, Oregon, Georgia and Washington, D.C., all have managed to channel state and federal funding into the same classrooms.

Part of the problem in New Mexico is that pre-K program quality, particularly among Head Start and CYFD providers, is highly variable.

What is counterintuitive about the lack of collaboration and disputes over quality is that many organizations that run Head Start programs also run state-funded pre-K – just not in the same classroom. Likewise, some school districts have both state grants for pre-K and federal grants for Head Start, but the programs are kept separate.

Not only does the state’s policy breed competition, it effectively segregates low-income preschoolers from their middle- and upper-income peers. “It’s a good thing for all children to be integrated across income from an early age,” Baca said. “The laws and policies can change. We have to have the will.”

Griego’s Head Start program is located in the West Las Vegas School District, which also hosts a state-funded pre-K. He had hoped to share building and recreational space, but the state said no.

She adds, “Our mixed delivery model… allows the diversity of programs that we have.” That means that parents have options, at least in areas where multiple programs exist.

Neither the governor’s office nor the Public Education Department responded to multiple requests for comment.

In Anthony — where the Head Start and state pre-K are separated by a chain-link fence — the Gadsden Independent School District was an early adopter of the state pre-K program. It offers half-day preschool to some 500 4-year-olds.

Superintendent Travis Dempsey said as his schools expand and budgets tighten, the district may no longer be able to share its campus or utilities with Head Start. GISD is the fifth-largest district in the state and one of the fastest growing.

“Part of what we’re struggling with is that you have a school that is growing,” he said. “As my budget shrinks, I have to find ways to keep things in place.”

“It is competitive,” said Amanda Gibson, president of the Association of New Mexico Head Start providers. She runs the Head Start program on the Anthony Elementary campus.

“I’m having an issue with Gadsden wanting to expand,” she said. “They are using state funds to pick up 4-year-olds and I’m losing slots.”

The same sort of competition repeats itself from Silver City to Raton, from Albuquerque to Santa Fe, from the Mescalero Apache nation to the Zuni Pueblo.

“I know what’s going on in those rooms,” says Misty Pugmire, referring to state pre-K in Grant County’s Cobre School District. She spent the better part of her career in the school district before joining Head Start a year ago.

“They went after Head Start,” she said. “It is absolutely a competition.”

The lack of collaboration also frustrates state legislators, according to Weinberg of the Thornburg Foundation: “Policymakers say, ‘Why would we give you more money for pre-K if all it is doing is taking away federal dollars?’”

For those who want to see existing state and federal dollars put to the most efficient use, the lack of collaboration is equally vexing.

At a Legislative Finance Committee hearing in Taos last fall, staff analysts presented a report on early childhood education. Their own studies, they said, consistently found that pre-K programs improve math and reading skills for low-income 4-year-olds, while lowering the need for special education and reducing the rate of kids who get held back.

Sen. John Arthur Smith, (D-Deming), a long-serving lawmaker from one of the state’s poorest regions, pointed out the importance of the millions in federal Head Start funding. He shared concerns about lost dollars and duplicated efforts.

Then he asked a pointed question: “How can we work together?”

No one in the room had an answer.