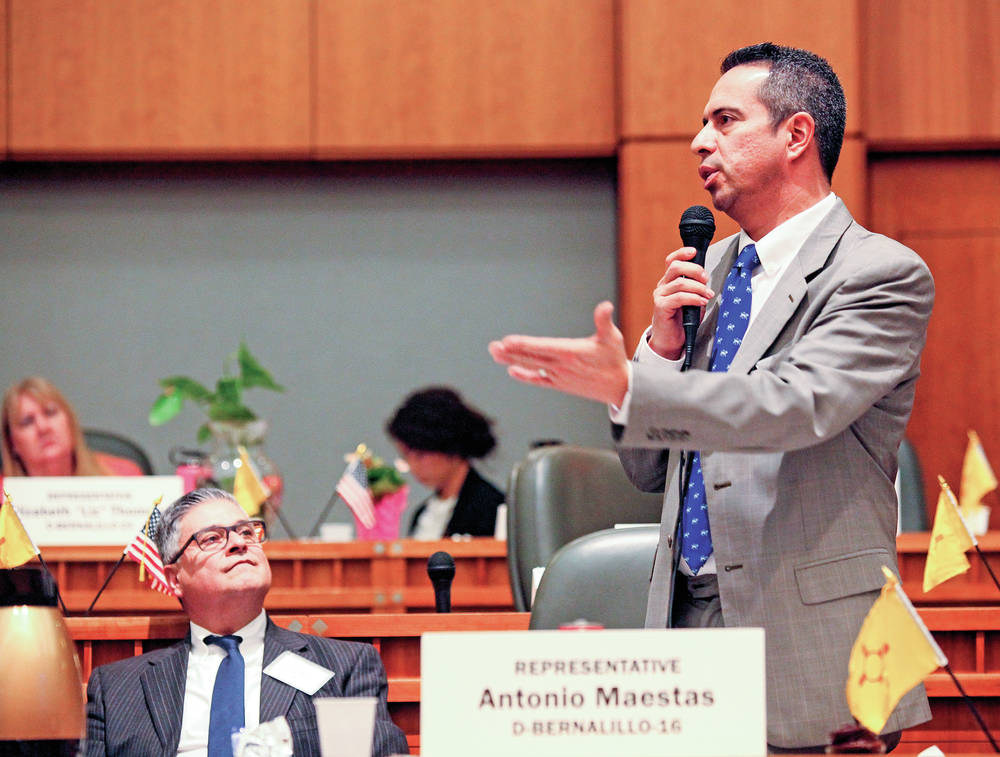 Rep. Antonio "Moe" Maestas, a cosponsor of House Joint Resolution 1, answers questions Tuesday from members of the House about a proposal to withdraw more money each year from the Land Grant Permanent Fund for early childhood education. The House passed the proposed constitutional amendment by a vote of 36-33.

The state House of Representatives voted Tuesday to ask New Mexicans for an additional piece of the state’s $17 billion Land Grant Permanent Fund to pay for early childhood education.

The House passed the proposed constitutional amendment by a vote of 36-33 that fell mostly along party lines after hours of debate that were both wonkish and visceral — dealing with a facet of the state’s finances that is arcane but deeply rooted in New Mexico’s history. In the Land Grant Permanent Fund, lawmakers argued alternately, there is an opportunity to break generational cycles of poverty or a risk of imperiling the state’s financial future.

Progressives and advocates for children’s issues have pushed similar proposals for years, arguing additional money from the fund could provide a needed boost for families in the state with the highest rate of child poverty. But critics in both parties have countered that taking an additional 1 percent of the fund would strain the Land Grant Permanent Fund in the future.

House Joint Resolution 1 heads next to the state Senate, and if it passes, the proposed constitutional amendment would go to voters later this year.

But with only nine days remaining in this year’s 30-day legislative session, the measure faces a big challenge in the state Senate, where a similar resolution languished last year amid opposition from Republicans and budget hawks in the Democratic majority.

The amendment would take about 1 percent more of the Land Grant Permanent Fund each year for education.

Backers said after the vote that they would support changing the amendment to take less than the additional 1 percent if that would ensure its passage through the Senate.

In the first few years, the additional 1 percent would mean more than $150 million annually for early childhood education programs.

Supporters argue that would make a difference for the state’s children.

Rep. Antonio “Moe” Maestas, a Democrat from Albuquerque and a cosponsor of the measure, pointed to research showing that children who participate in early childhood education programs demonstrate higher competency with reading and math, as well as better attendance, health and academic performance throughout their schooling.

Others, such as the Catholic Church, have argued it is simply immoral for a state with such a large fund that is invested around the world not to use more of the money now in face of intense poverty.

But the merits of early childhood education were not up for dispute Tuesday. Instead, critics contended that using yet more of the fund would imperil it for future generations.

Rep. Roberto “Bobby” Gonzales voted Tuesday against a measure that would ask voters to approve an additional 1 percent withdrawal from the state’s Land Grant Permanent Fund to pay for early childhood education. The House passed the proposed constitutional amendment by a vote of 36-33.

Created around the time New Mexico became a state to fund its schools and universities, most of the money flowing into the fund comes from oil and gas production on state trust land and is in turn invested by the State Investment Council.

The state already draws out about 5 percent of the fund every year — which amounted to $747 million in calendar year 2017 — for public schools, universities and other institutions. Critics argue using another 1 percent would eventually lead to diminished returns and less money for the public school system.

That would make it less valuable for the day when oil and gas no longer provides such a strong stream of revenue. Since this time last year, for instance, the endowment has grown by about $2 billion.

“That’s what this proposal seeks to do — steal from the future,” said Rep. Dennis Roch, a Republican from Logan.

Other lawmakers questioned whether the amendment’s proponents have a feasible or detailed plan for ensuring the additional money goes to quality early childhood education programs, pointing out that money from the Land Grant Permanent Fund goes not only to schools but other institutions, including hospitals.

Backers say this is the eighth year lawmakers have weighed such proposals and touted it as a victory that legislators seem sold on the value of early childhood education even if they are not convinced on how to pay for it.

“Now, they are all saying this works,” said Allen Sánchez, president of CHI St. Joseph’s Children, a Catholic nonprofit organization that is backing the measure.

In that sense, the issue has pitted fiscal conservatism against a sort of progressive populism.

With New Mexico’s permanent funds ranking among the nation’s largest, Rep. Eliseo Alcon, a Democrat from Grants, questioned why lawmakers are more willing to pay out fees to investment managers to handle the funds than to spend that money on the state’s children.

“We pay somebody in New York City wearing a three-piece suit … to play with this money, but we’re not willing to spend it on our children,” he said.

Meanwhile, the archbishop of Santa Fe cheered the vote.

“We cannot continue with the status quo wherein our children rank in the highest percentage of those living in poverty in the United States,” Archbishop John C. Wester said in a statement.

Still, some Democrats are wary. Democratic Reps. Candie Sweetser of Deming and Roberto “Bobby” Gonzales of Taos voted against the measure. Every Republican voted against the resolution except Rep. Sarah Maestas Barnes of Albuquerque who was not present for the vote for the second consecutive year.

Gonzales pointed to previous changes in how the Land Grant Permanent Fund is used as cause for concern.

The State Investment Council has reported, for example, that the $17 billion fund would be even $1.5 billion larger today if the state had not increased the distribution by about 1 percentage point about 15 years ago.

The latest proposal, Gonzales said after the vote, would “open the floodgates of one of the most valuable things we have.”