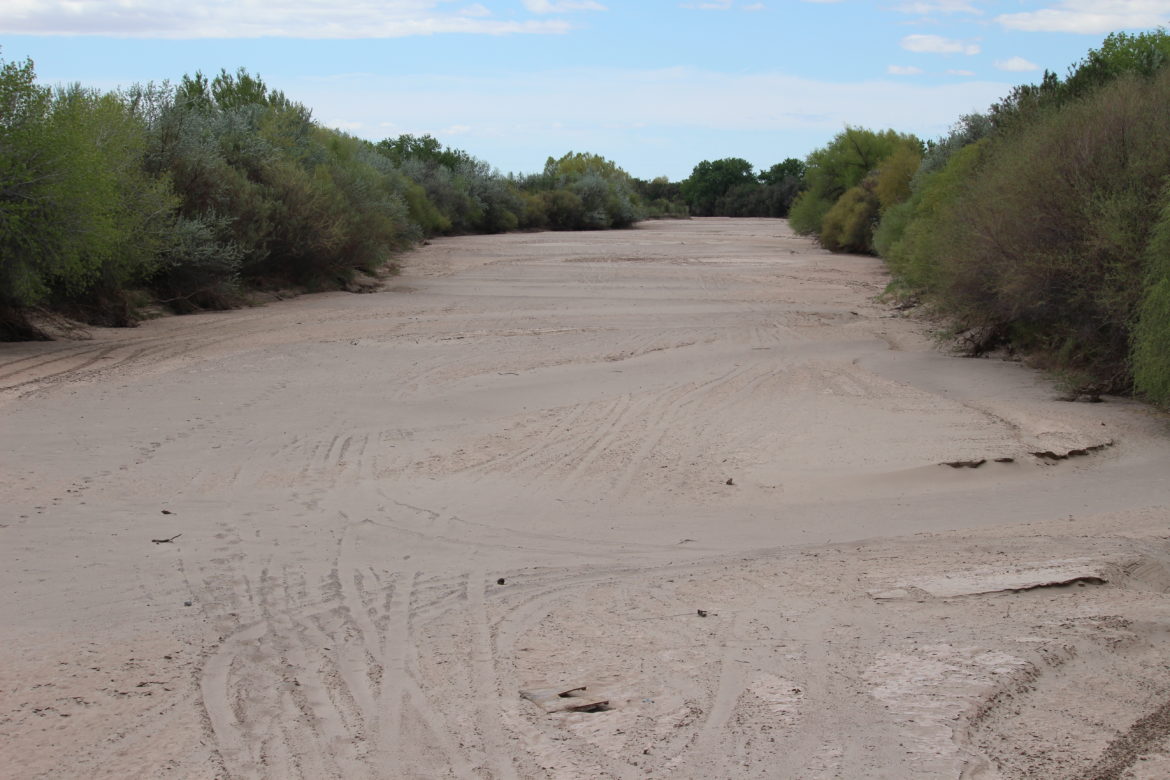 As drying in the Middle Rio Grande spreads, and a lawsuit over the river’s waters moves through the U.S. Supreme Court, a top Texas official is calling out New Mexico’s water boss.

Texas’ commissioner on the Rio Grande Compact Commission, Patrick Gordon, wrote a letter to New Mexico State Engineer Tom Blaine earlier this month. In it, he noted that certain actions by Blaine could put New Mexico at risk for even greater damages if Texas prevails in its case on the Rio Grande.

Specifically, Gordon is concerned Blaine will approve a copper company’s plan to pump more than a billion gallons of groundwater each year from near Hillsboro, N.M.

Doing so would would violate the Rio Grande Compact of 1938, Gordon wrote, adding: “These ongoing violations reinforce Texas’s action in the United States Supreme Court and add to its recoverable damages against New Mexico.”

Five years ago, Texas sued New Mexico and Colorado, alleging that by allowing farmers in southern New Mexico to pump groundwater near the Rio Grande, New Mexico failed for decades to send its legal share of water downstream. Texas filed the lawsuit after New Mexico sued over a 2008 operating agreement between the U.S. Bureau of Reclamation, southern New Mexico farmers and Texas water users. This year, the Supreme Court allowed the U.S. government to intervene in the case against New Mexico, too.

“Texas is not trying to take New Mexico’s water, at all,” Gordon said to NM Political Report of Texas v. New Mexico & Colorado. “What we’re hoping is New Mexico will manage its groundwater in a manner that does not impact deliveries of surface water to Texas, which is what the problem is now.”

Eight years ago, New Mexico Copper Corporation (NMCC) started lining up permits to re-open an abandoned copper mine near Hillsboro. It planned to use groundwater rights purchased in the 1980s, but last year, a state judge found most of the water rights claimed by the company are no longer valid.

NMCC appealed that decision and filed a new application with the Office of the State Engineer to pump 5,234 acre-feet of water each year.

Opposed by some local residents and landowners, the mine also attracted attention from downstream water users along the Rio Grande. Elephant Butte Irrigation District and the New Mexico Pecan Growers opposed the project, commenting that pumping groundwater for the mine could affect the water rights of its members. In a 2016 letter to the U.S. Bureau of Land Management (BLM), which was studying potential impacts from the mine’s reopening, the New Mexico Interstate Stream Commission(ISC) noted that BLM didn’t adequately consider impacts on New Mexico’s ability to meet its Rio Grande water delivery requirements to Texas.

In the BLM’s 2017 environmental impact statement, the agency noted the predicted reductions in groundwater will have a “more notable effect on the Rio Grande, reducing surface water flows and potentially the amount of water stored behind Caballo Reservoir.”

“We’re concerned about the actions of the State Engineer,” Gordon told NM Political Report, adding that Texas isn’t trying involve itself in how New Mexico manages its groundwater. Gordon also noted that the problems didn’t start with Blaine, but have been ongoing since “way before” Blaine became State Engineer in 2014.

“This is not about New Mexico’s groundwater,” Gordon explained. “But if you read the environmental impact statement, it talks about river flow and storage in Caballo. That’s surface water. And surface water is what’s delivered to Texas.”

The proposed mine could also affect water quality, he said. “The tailings ponds are [in the watershed] right above Caballo: what happens if those leak?” he asked. “That’s not just a Texas issue.”

In his letter to Blaine, Gordon also disputed that the company’s acquisition of water rights from the Jicarilla Apache Nation is a solution.

In a 2015 agreement, NMCC proposed leasing San Juan-Chama water from the Jicarilla Apache Nation. (That is water piped from the San Juan River, a tributary of the Colorado River, into the Chama, which feeds into the Rio Grande.) That water wouldn’t be used at the mine, but would replace water lost to the river due to groundwater pumping.

According to Gordon’s letter, that 15-year lease “would not come close to remedying the immediate and long term depletions” to the river and the reservoir.

“We’re in a drought, we understand that we all need to manage water, and we think the operating agreement has done a good job in managing the water that’s available from the project,” he said, referring to the U.S. Bureau of Reclamation’s Rio Grande Project, which delivers water stored in Elephant Butte and Caballo reservoirs to southern New Mexico and Texas.

“When New Mexico sued the two districts and the U.S. over the operating agreement, that’s when Texas decided we had to go to the Supreme Court,” he said. “I feel like we had no choice.”

No end in sight to drying

In the Middle Rio Grande south of Socorro, about 17 miles of the river are currently dry, at a time of year when the channel should be full of snowmelt and spring flows. Water managers anticipate the drying will expand north, reaching Albuquerque this summer.

“We are working closely with our partners to do everything we can to keep this stretch wet as long as we can,” said Mary Carlson, spokeswoman for the Bureau of Reclamation’s Albuquerque Area Office.

“The extreme difficulty will come when MRGCD stops or curtails regular operations and is operating strictly with P&P water for the Pueblos,” Carlson said, referring to the Middle Rio Grande Conservancy District and “prior and paramount” water the federal government delivers to tribes along the Rio Grande.

“Our modeling shows that could happen as early as the end of June or early July,” she said. “But we’re hopeful that with the help of some summer storms and close coordination with our partnering agencies, we might be able to push that back further to mid-August.”

Additionally, water managers anticipate New Mexico will enter Article 7 conditions on the Rio Grande in May.

Consistent with the agency’s past actions under Blaine, the public information officer for the Office of the State Engineer did not respond to NM Political Report.

To read all of our coverage of Texas v. New Mexico & Colorado: https://nmpoliticalreport.com/series/texas-v-new-mexico-scotus/