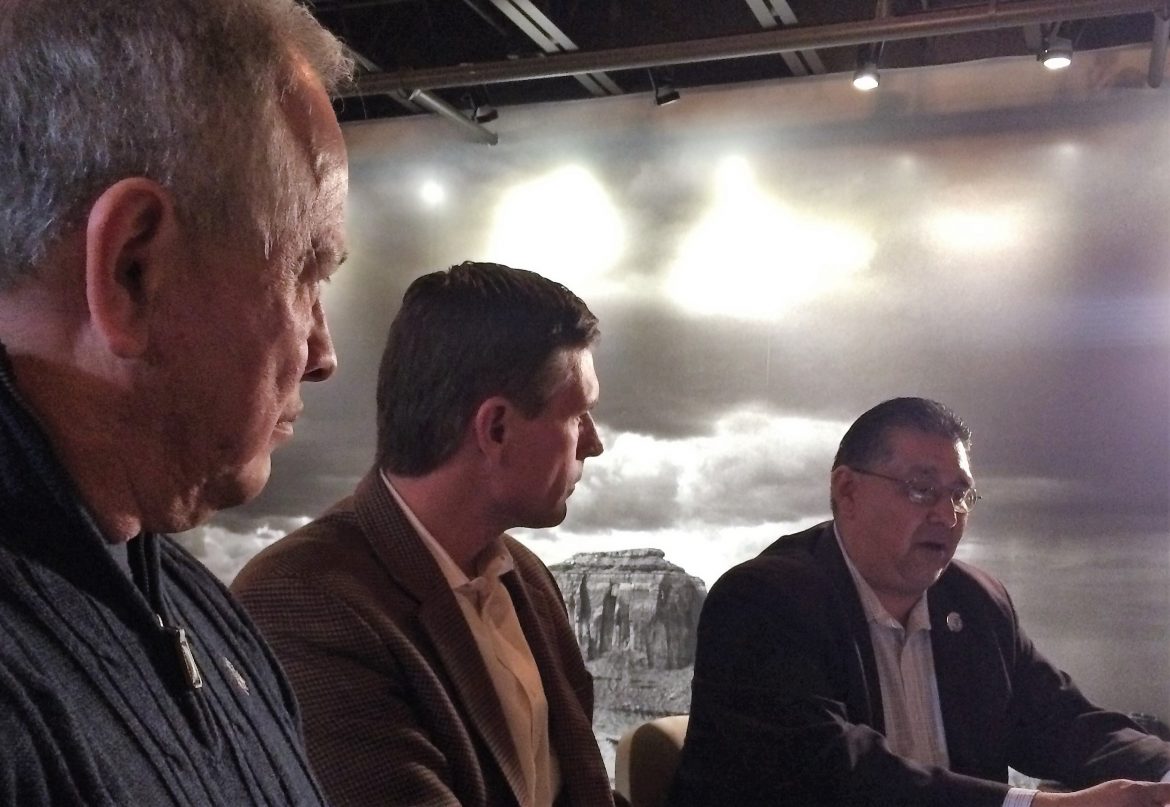 On Monday, federal employees will return to work.

After more than 30 days, the partial federal shutdown ended Friday. During that time, almost 11,000 New Mexicans—and 800,000 people nationwide—were either furloughed or working without pay.

But many people remain wary, given that the deal worked out between Congress and the White House only reopens the government for three weeks, through February 15. Affected workers, who went two pay periods without compensation, will receive back pay. But they won’t be handed lump sum checks Monday. Instead, some federal workers have been told they’ll be reimbursed in small payments over a period of time.

On Sunday afternoon in Albuquerque, U.S. Sen. Martin Heinrich and U.S. Rep. Deb Haaland met with a handful of federal employees and officials from the Pueblo of Santa Clara.

Gov. J. Michael Chavarria explained that the Pueblo of Santa Clara has been unable to work on forest projects meant to reduce wildfire danger and they’re still unsure about the status of critical grants. The shutdown also affected health programs, social services and court proceedings, including those involving child or elder abuse.

Not being able to move forward on programs makes everyone feel bad—and that includes tribal leaders and staff, who try to minimize the impacts on the community and the land.

“We’re all servants to our mountains, to our lands, our animals and our people,” he said, adding that the physical and emotional stress, including guilt, hurts people.

Dennis Vásquez, superintendent of Petroglyph National Monument, has weathered a number of federal shutdowns over the years. But this one was unique.

“In the past, we shut the gates and the public wasn’t allowed in,” he said. This time, natural and cultural resources were left vulnerable.

“Our primary job is to preserve unimpaired the natural and cultural resources and values of the national park system for the enjoyment, education, and inspiration of this and future generations,” he said, quoting the National Park Service’s mission. “Access is secondary.”

During the partial shutdown, many of the trails at Petroglyph National Monument remained open, though the visitor center and other services were shuttered. At some point, someone cut a fence and drove through the park, probably with a Jeep, Vásquez said.

The shutdown was difficult, he said, for many reasons—not least of which was the “degradation of our duties,” he said. “We have a noble mission, and people work for greater purposes, with the highest ideals for public service, and when you don’t see that reinforced, it’s”—he paused, to find the right word—“disheartening.”

Joaquin Baca, a hydrologist with the U.S. Fish and Wildlife Service, said federal workers have faced challenging conditions for two years. Morale is low, he said, and many people are seeking other job options. When employees retire or leave the agency, their positions often remain unfilled. And when new people are hired, they often have the same duties and responsibilities as those they replaced, but are paid far less.

In addition, contract workers are affected. Grants go unfunded, partnerships are neglected and interns are turned away from new opportunities. This is also when wildland firefighters are hired, so that they are trained and ready for fire season.

“We love our mission and when we can’t do our jobs—it’s not just personal, where you can’t pay your mortgage—people get really depressed,” said Kathy Granillo, refuge manage at Sevilleta National Wildlife Refuge near Socorro.

She gave another example of the “ripple effect,” pointing out that last winter, scientists found evidence of white-nosed syndrome in bats within New Mexico. That fungus has killed millions of bats in the United States since the winter of 2007-2008 and has been spreading west. During the bats’ hibernation season this winter, monitoring should have been ongoing. Due to the shutdown, it wasn’t. And even it had been, the National Institutes for Health wouldn’t have been able to process samples. “We are losing information on a really critical battle,” she said.

All three federal employees spoke of how public service was once considered constant and stable.

That’s not the case anymore.

Vásquez mentioned that Petroglyph National Monument had hired a number of new employees, including military veterans. Almost immediately, the shutdown occurred, and some found themselves having to become Uber drivers to make ends meet. “We put them in this predicament,” he said, adding: “I just hope we don’t have to do this again.”

Heinrich said Democrats took a hard line against President Donald Trump’s demands for money for a border wall because they don’t want the president using the same tactic on other issues over the next 21 months. “We were afraid we would get in this cycle of constantly holding federal workers hostage,” he said.

Haaland called the shutdown a “disaster.”

“We have a president right now in office who has no experience in how government works,” she said. “He’s used to having his own way—we’ve seen this time and time again, and this was just one more example to use his office to fulfill his own personal need or to get his way.”

Heinrich added that there could be a legitimate argument over the appropriate size of government. “But you need to show respect to the entire workforce, or the services that people truly do need are going to suffer,” he said.

“We see the best and brightest are being chased out of these positions, and that doesn’t serve anyone well: Look at the priorities this administration had,” Heinrich said. “They basically told people who process permits for industry, ‘You’re going to stay in place. But if you’re job is to protect public lands, go home.’ That says a lot.”