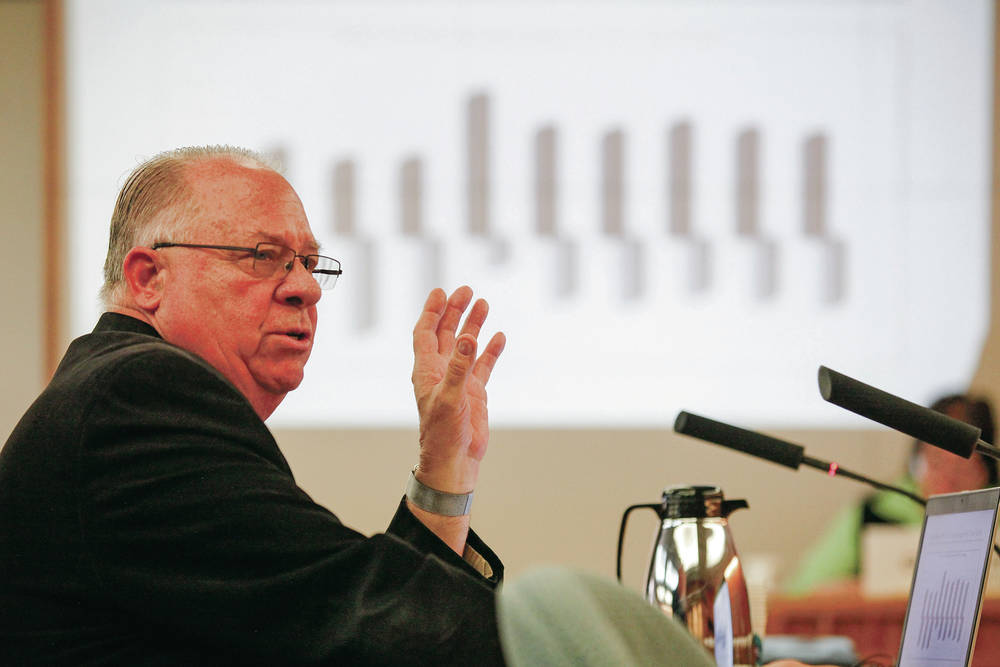 Stan Rounds, executive director of the New Mexico Coalition of Education Leaders, stands against a proposal to pull money from the state's multibillion-dollar Land Grant Permanent Fund to expand prekindergarten initiatives. The endowment is designed to support K-12 public education programs, he says, and should be reserved for that mission.

For just a moment, it looked like Stan Rounds was the loneliest guy in the room.

The executive director of the New Mexico Coalition of Educational Leaders stood up during a committee hearing to tell educators, lawmakers and early childhood education proponents that he is against a proposal to pull money from the state’s multibillion-dollar Land Grant Permanent Fund to expand prekindergarten initiatives.

That’s because, he argued, that state trust land endowment is designed to support K-12 public education programs — and any other draw from the fund, now valued at about $17.5 billion, could hurt schools down the line.

Rounds was one of only two people in that legislative hearing to voice opposition to House Joint Resolution 1. The other was a business representative from Albuquerque.

But Rounds’ unexpected resistance could be shared by a number of school superintendents.

“Most superintendents, I suspect, would be on my side,” Rounds said a few days after the hearing, in which committee members voted 10-4 along party lines to give the resolution a “do pass” recommendation. “The issue is, when is it prudent to go into that fund? It repurposes what the permanent fund is set up for.”

On Saturday, HJR 1 passed the House Commerce and Economic Development Committee, sending it on for a vote on the House floor. It might have enough support to pass the House, but it faces a tougher battle in the Senate.

The debate over early childhood education and the endowment, which draws revenues from oil and gas drilling, mineral extraction, livestock grazing and other uses of state trust land, has the potential to strain the usually strong bonds between education advocates.

While supporters of New Mexico’s K-12 public schools almost always agree that an expansion of high-quality pre-K programs would help more children succeed as they advance through school, some fret about funding efforts that come with a risk of decreasing the endowment’s revenue stream for public schools down the line.

“As a superintendent, I have long had concerns about raiding the permanent fund, for I fear the erosion of a strong funding stream upon which K-12 funding relies,” said Dennis Roch, superintendent of Logan Municipal Schools and a former state representative. “My concern is for future generations of New Mexicans who … will no longer have a viable fund to continue supporting public education.”

Roch, a Republican, said the idea “undermines the very reason we call this fund ‘permanent.’ “

“When you have a permanent fund, you have to be careful how you use it,” Perea said, adding that his district is already funding pre-K programs for all students who want to attend.

For years, the Land Grant Permanent Fund has sent hundreds of millions of dollars annually to public schools, universities and other beneficiaries across New Mexico through an annual 5 percent draw.

Proponents of HJR 1, which would take another 1 percent, or about $150 million a year, from the endowment to fund pre-K, say it’s a good bet. The money would give more of the state’s young children a chance to develop social, emotional and motor skills, advocates say, along with basic literacy and math skills.

They contend that down the road, this investment will pay off with better academic achievement scores, fewer high school dropouts and a better shot at success in careers and college.

Allen Sánchez, president of the nonprofit Catholic charity group CHI St. Joseph’s Children and a supporter of the initiative, said if the resolution moves forward and New Mexico voters favor a 2020 ballot question amending the state constitution to allow the additional 1 percent draw from the fund — and Congress gives its approval — more jobs would be created in the state for educators and support staff.

“It’s a win-win,” Sánchez said of the resolution, introduced by Reps. Antonio “Moe” Maestas and Javier Martinez, both Democrats from Albuquerque.

Funding a statewide pre-K expansion will cost money, Sánchez said, and he believes the endowment is the best way to get the job done.

“You want to bring another funding source to the table? Bring it,” Sánchez said. “If you are objecting to this plan with the hope that money can come from somewhere else — well, no one’s showing me where.”

Tom Sullivan, a longtime New Mexico educator and former superintendent, said skepticism of the effort and opposition, such as Rounds’, could be rooted in history: Some school districts aren’t so sure they benefited greatly the last time state leaders mined the permanent fund for public education back in 2003.

At that time, voters approved a constitutional amendment authorizing the state to dig deeper into the fund to boost education. Then-Gov. Bill Richardson, a Democrat, said it was worth it for the state to invest in schools “instead of Wall Street.”

Though Sánchez, the resolution’s sponsors and other early childhood education proponents are optimistic that Gov. Michelle Lujan Grisham and a heavily Democratic Senate will support the resolution, it first must get through the Senate Finance Committee, which has repeatedly shot down similar measures in the past.

“I can hold the line on it,” he said, “even with the Democrats who waiver.”