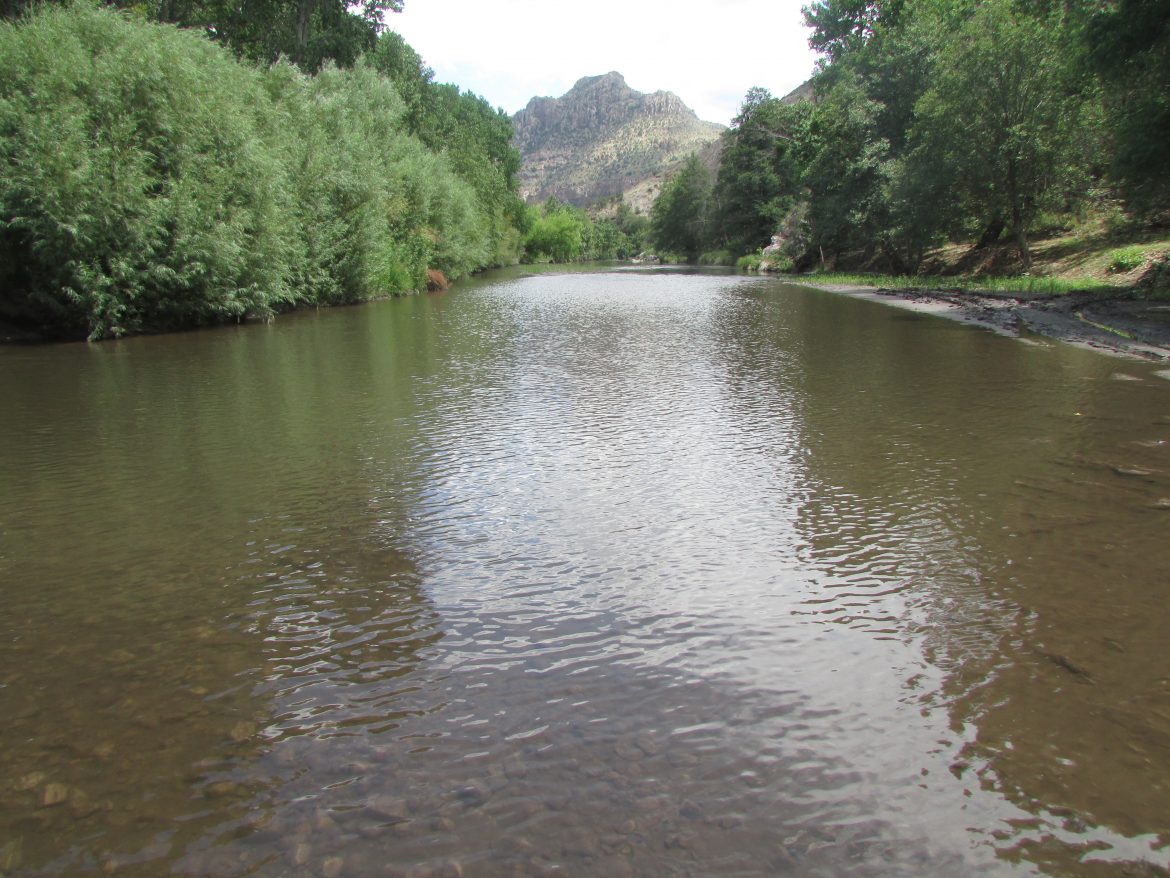 Plans for the Gila River diversion have changed. Again.

At a meeting in Silver City on July 2, members of the New Mexico Central Arizona Project Entity voted to scale back development plans on the Gila River and one of its tributaries in southwestern New Mexico.

The vote took place following completion of a preliminary draft environmental impact statement (PDEIS) about the group’s plans in the Cliff-Gila Valley, on the San Francisco River and in Virden, a town in Hidalgo County near the Arizona border.

As proposed by the CAP Entity, the waters of the Gila River would be diverted, about three-and-a-half miles downstream from where the river runs out of the Gila Wilderness, via a 155-foot concrete weir wall. The project would also replace and repair existing ditches in the Cliff-Gila Valley, build storage ponds in the valley and in Winn Canyon, and create facilities for aquifer storage and recovery.

The proposal also called for storage ponds in Virden. And on the San Francisco River, the CAP Entity planned to replace existing diversions with a new weir and build an earthen embankment dam and reservoir in Weedy Canyon, west of Highway 180 between Reserve and Alma.

Altogether, along with improvements to existing ditches, the project would have cost more than $120 million to build.

Now, many of those components are off the table.

According to Jeff Riley, manager of the engineering division at the Phoenix area office of the U.S. Bureau of Reclamation, the CAP Entity’s attorney, Pete Domenici, Jr. worked up a modified alternative to fit within the budget of the federal construction subsidy, which is about $56 million.

Riley explained that the modified proposal still includes a Gila River diversion and some of the storage ponds, but will leave out Winn Canyon storage and the aquifer storage and recovery components. It also excludes the Weedy Canyon dam and storage on the San Francisco. The earlier plans for Virden remain.

“What this accomplished, was a project where all three areas”—the Cliff-Gila Valley, Virden and the San Francisco River—“still had pieces intact, but the cost would fall to about $50 million in today’s dollars,” said Riley.

The project has a long history.

In 2004, the Arizona Water Settlements Act authorized New Mexico to trade water with a downstream user on the Gila, and also gave the state ten years to decide how to spend tens of millions of dollars on water projects in Catron, Grant, Hidalgo and Luna counties. The state could undertake conservation and efficiency projects, or receive a larger subsidy and build diversions on the Gila and San Francisco rivers.

Five years ago, the New Mexico Interstate Stream Commission (ISC) chose the diversion alternative—and the bigger pot of money. The state created the CAP Entity in 2015, and the organization—comprised of counties, towns and irrigation districts—took responsibility for planning and building the project and reimbursing the federal government for operation, maintenance and repair costs.

NM Political Report reached out to Domenici, as well as CAP Entity executive director Anthony Gutierrez and chair Darr Shannon. They did not respond to voicemails or emails.

This isn’t the first time plans have changed.

Three years ago, the CAP Entity backed off plans by the state to build a diversion that would have cost roughly one billion dollars, and instead directed its engineering contractor to come up with plans that would cost between $80 million and $100 million to build. The entity also amended its plans after that, in 2017, and repeatedly in 2018 and 2019.

“They’ve used the NEPA analysis as a kind of feasibility process,” said Todd Schulke, co-founder of the Center for Biological Diversity, who attended the July 2 meeting in Silver City. Normally, projects have been solidified and determined to be feasible, financially and technically, before the environmental analysis begins. Under the National Environmental Policy Act, or NEPA, a project’s environmental impacts must be studied before it can be approved.

“Instead, they’re using [NEPA] as a testing ground for a bunch of different ideas, and that’s why the proposal keeps changing,” Schulke said. “They’ve never had a feasible project from the beginning. From an outside standpoint, that’s easy to see.”

Since the beginning of the process, Schulke has been attending meetings and watching all of the arguments and changes play out, over the course of many years.

“They’re perpetually starting over, rethinking and rethinking,” he said. “But it always comes back to the same answers: You can’t afford it. And the technical problems are too great.”

If the project were to go over cost, CAP Entity board members and its executive director have repeatedly suggested they could raise additional revenue by selling water. In 2016, executive director Anthony Gutierrez dismissed concerns, for example, that water buyers had yet to be identified, saying that “water is always valuable,” especially during times of drought.

The CAP Entity still hasn’t identified any possible buyers. And water from the diversion would be expensive.

Under the 2004 legislation, New Mexico doesn’t own the water outright. Rather, that federal law gave New Mexico the opportunity to trade water with a downstream user in Arizona. Currently, CAP exchange fees are $158 per acre foot.

As project opponent, and former ISC director, Norman Gaume noted in a five-page critique of the preliminary draft EIS, the document fails to note that two different models—one completed by the engineering consultant AECOM and one run by Gaume and Peter Coha—found that declining snowpack and warming mean that in some years there would be no available water, and in other years, significant shortfalls of water.

Gaume called the preliminary draft EIS “grossly misleading” and said it was “full of errors.” In a letter, he said the analysis was “severely biased in favor of a Gila diversion, yet show low water yields, unaffordable costs and wholly inadequate revenues.” He added that the document “falsely claims the Gila diversion would provide a firm yield of water, including in drought.”

He also blasted the state’s continued spending on the diversion and the environmental analysis of the CAP Entity’s plans. “And the ISC wants to spend another one million dollars on the EIS,” he said. “It blows my mind.”

At the end of this year’s legislative session, Gov. Michelle Lujan Grisham line-item vetoed $1.698 million in New Mexico Unit funding for the Gila River diversion. But the New Mexico Interstate Stream Commission has continued to approve spending for the project.

Lujan Grisham vocally opposed the diversion project during her campaign, and her communications director, Tripp Stelnicki said she “has not wavered from her opposition to a diversion project.”

He added that the ISC “has moved forward with decisions that close out financial obligations made by the prior administration.” That includes, he said, funding toward completing the required NEPA process as contractually required by AWSA.

For New Mexico to receive its full federal subsidy for the diversion project, the Secretary of the U.S. Department of the Interior must issue a decision on the project by the end of 2019. This means the environmental work must be complete before then. Under the law, New Mexico can be granted an extension, but only if it can show its actions did not cause the delays.

Under the original timeline for the project, the scoping period should have begun in the winter of 2016/2017, and the draft EIS was supposed to be released in the summer of 2018. But without a firm plan, location or engineering design in place, the federally-required environmental studies didn’t begin until June 2018.

“If the secretary issues a negative decision or the EIS is not complete by the deadline set by the Department of the Interior, the New Mexico CAP Entity will not have access to any additional construction funds since a New Mexico Unit would not be built,” Stelnicki said, noting that the state would not be required to repay the money spent through the process. The state and the CAP Entity have already spent about $17 million.

Recently, Rolf Schmidt-Peterson was promoted to director of the ISC. During a special meeting of the commission on Tuesday, he requested they next meet for two days in southwestern New Mexico, to tour the project area. That meeting will be held August 29 and 30.

To read all of our coverage of the Gila River diversion: https://nmpoliticalreport.com/tag/gila-river/