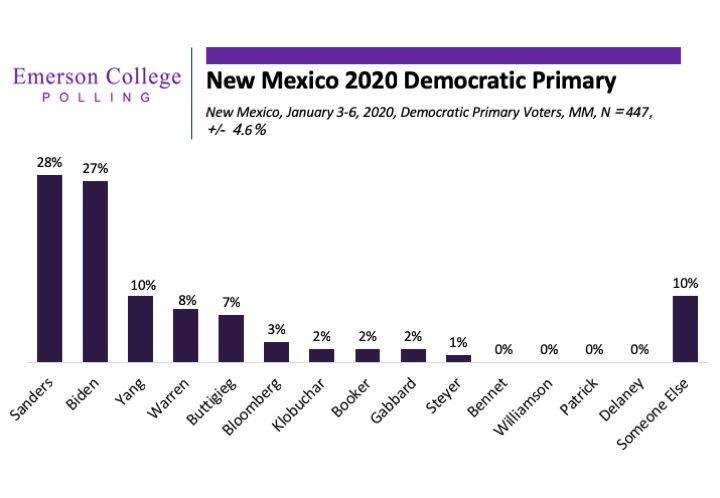 A new poll of New Mexico voters shows a two-way battle among Democrats seeking support for the Democratic nomination in the state—while showing that top-tier Democratic names each outpace President Donald Trump in the general election.

The poll, conducted by Emerson College, shows that Vermont U.S. Senator Bernie Sanders has the support of 28 percent of likely Democratic primary voters, followed by former Vice President Joe Biden at 27 percent. They were both far ahead of entrepreneur Andrew Yang (10 percent), Massachusetts U.S. Senator Elizabeth Warren (8 percent) and former South Bend, Indiana Mayor Pete Buttigieg (7 percent). No other candidate received the support of more than 3 percent of voters.

New Mexico’s primary is on June 2, very late in the process; only the U.S. Virgin Islands’ June 6 Caucus is later.

But the poll indicates whichever Democrat emerges from the primary has a head start on winning New Mexico’s five electoral votes in November.

Trump’s campaign has said they will target New Mexico in 2020, and Trump appeared at a campaign rally in Rio Rancho last year.

The poll also showed Democrat Ben Ray Luján has a 54 percent to 35 percent lead over Republican Gavin Clarkson. Clarkson is the only one of the four Republican candidates that Emerson polled.

The poll showed 38 percent approval and 38 percent disapproval—while the remainder had no opinion of her job performance. Lujan Grisham was sworn into office at the beginning of 2019 and will face reelection in 2022.

The Democratic primary sample was 447, and has a margin of error of +/- 4.6 percentage points.