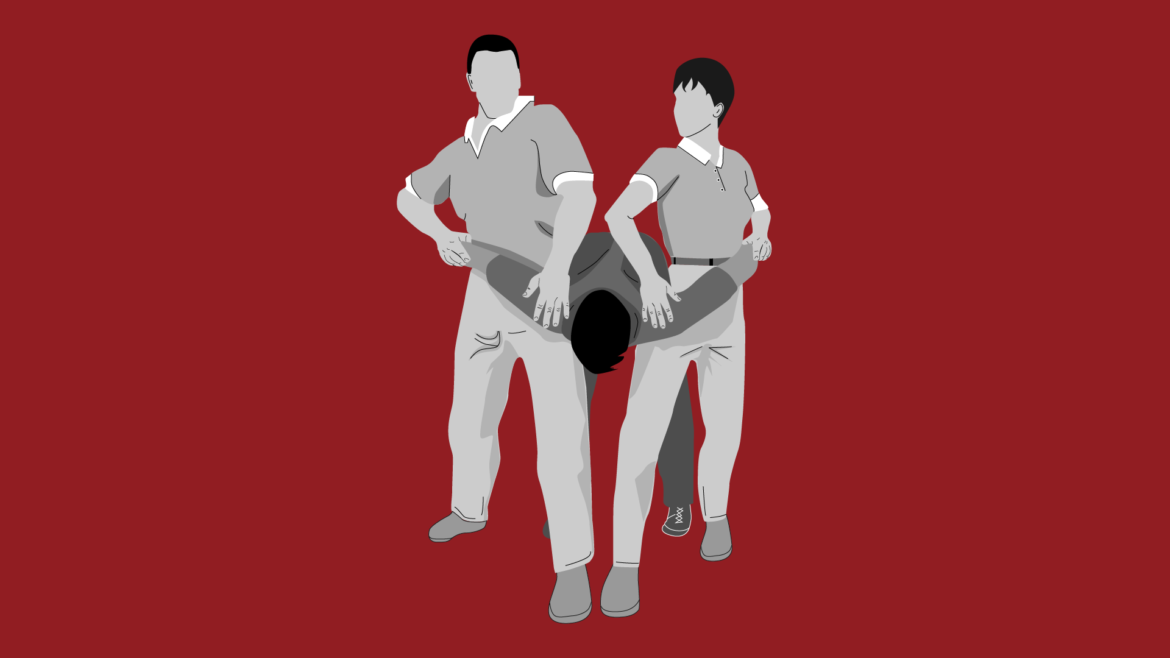 APS employees are trained in using multiple restraints on students, including a “team control position,” pictured above.

Gov. Michelle Lujan Grisham, Attorney General Hector Balderas and Rep. Javier Martínez, D-Albuquerque, are all moving independently to rein in some of the most dangerous practices in New Mexico classrooms: restraint and seclusion.

Each is pursuing separate initiatives to enforce stricter reporting requirements for incidents involving the controversial practices.

It also found that APS repeatedly filed misleading reports to the federal government, even taking the extraordinary step of refusing to provide records to parents whose children were restrained or secluded.

Often referred to as “therapeutic holding” or “physical management,” restraint is a contentious and dangerous method of behavior management derived from karate and judo, in which specially trained school staff place children and youth in physical holds that restrict movement. Seclusion, another behavior management practice, entails forcing a student into isolated rooms sometimes referred to as “scream rooms.”

Child psychologists have decried the practices as ineffective and traumatic — for both students and staff. Restraint and seclusion are disproportionately used on students with disabilities, often for behavior that stems from autism and related disorders. In Albuquerque Public Schools and other districts across New Mexico, the techniques have led to the hospitalization of children for physical and psychological injuries. In other states, children have died while being held in restraint holds at school.

Despite the risks, no system currently exists for schools to comprehensively track and report the use of restraint and seclusion to state authorities.

To address this lack of information, Martínez is rushing a bill through the Legislature’s drafting process. It would require schools to report instances to the state Public Education Department.

He is being helped by Laura Gutierrez, an Albuquerque mother whose son was repeatedly restrained and, in 2014, Tasered by school police for autism-related behaviors — one of several such incidents to occur statewide in recent years. Gutierrez, a disability rights advocate, is also behind a bill that would require more disability awareness training for school resource officers.

But the Martínez bill faces an uncertain path to passage. After barely clearing the Legislative Council Service’s drafting process before the Feb. 5 deadline, it now joins an already stacked agenda with only two weeks remaining in the 30-day session.

The governor has stated her support for tightening oversight of restraint and seclusion, saying in an interview with Searchlight that it is “appalling” that the state is not keeping better tabs on schools’ practices. She vowed to require districts to report all instances to the PED, but has indicated she prefers to do so through an executive rule change rather than through the Legislature.

“While we’re in agreement on the legislation, PED is going to get this done on its own,” spokesperson Tripp Stelnicki said in an email.

The New Mexico Office of the Attorney General, for its part, is attempting to force more robust enforcement through legislation. The office’s Legislative Affairs Division has been providing analysis and support for separate legislation on restraint and seclusion since November 2019, according to Senior Counsel Matt Baca. That bill, sponsored by Sen. Linda Lopez (D-Albuquerque), would place an outright ban on the use of seclusion, limit the circumstances in which restraint can be used, and increase reporting requirements to PED and to families.

Though laws on restraint and seclusion already exist at both the state and federal levels, school districts routinely break those laws with few repercussions. APS, along with most other school districts in New Mexico, claims zero instances of restraint in its biannual reports to the U.S. Department of Education’s Civil Rights Data Collection division. These claims, as Searchlight’s investigation showed, are false — and they make it difficult for the federal government to enforce students’ civil rights protections.

A  2017 state law outlawed the use of restraint and seclusion except in situations where a student poses an immediate danger to himself or others. It also required schools to inform parents of every instance in which their child was restrained or secluded.

The law, however, did not include any provisions for enforcement or statewide tracking. In the absence of such comprehensive reporting requirements, APS and other school districts around the state have continued to restrain and seclude students without the knowledge of parents or state regulators.

While parents and advocates have welcomed the efforts by the executive and legislative branches, some critics believe the proposed measures don’t go far enough.

“If a paper pusher at the state is collecting information at the school level, that’s a start,” said Gail Stewart, an Albuquerque attorney who has represented students with disabilities for two decades and who recently filed a lawsuit over the use of restraint and seclusion in APS.

“But unless somebody is willing to run roughshod over these administrators and make sure schools are actually recording incidents and reporting them to PED, this is not going

to trickle down. It’s illegal to not keep written records and report to parents about this, but that’s how schools have operated for a very long time.”