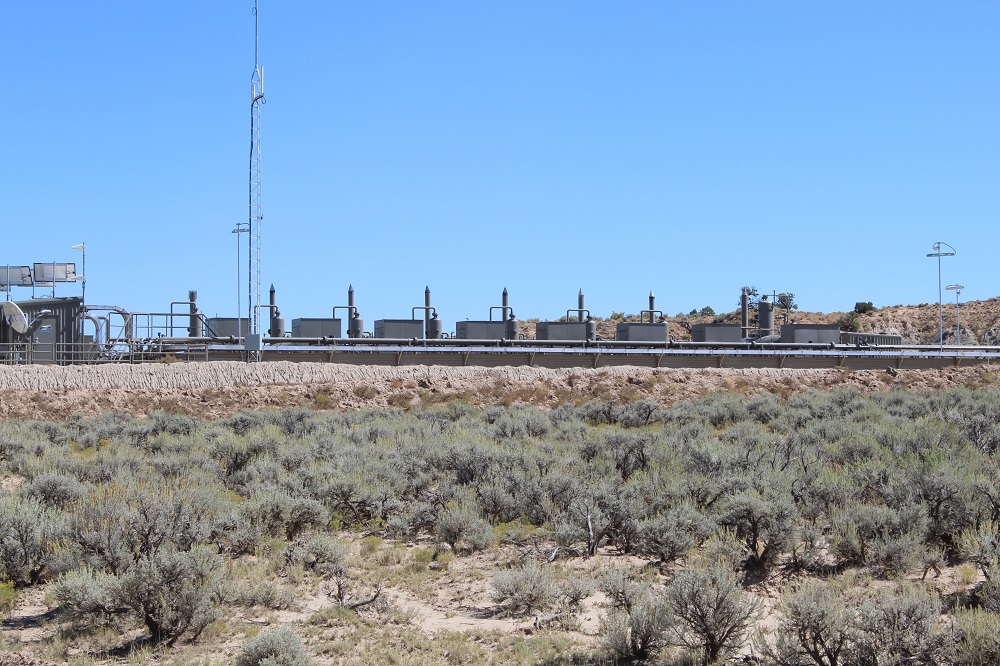 A well pad with six fracking wells near Counselor, NM

“We felt it was very important for the public and the regulated community and anyone to be able to take a look at draft regulatory language side by side from our departments and give us feedback,” Cottrell Propst said during a press conference Tuesday morning.

The draft rules are the culmination of nearly a year of work by the state’s Methane Advisory Panel, which was composed of oil and gas representatives, environmental groups and other stakeholders. Cottrell Propst said the process had been “incredibly collaborative” with stakeholders and said the two departments looked at other states’ methane rules in developing their own.

EMNRD’s proposed draft rule, which Cottrell Propst described as an umbrella regulation, would roll out in two phases. The first phase would involve data collection and “robust” reporting from oil and gas operators in the state’s two oil-producing basins.

“We know that having accurate data is really important for establishing meaningful baselines and enforceable goals to reduce natural gas waste,” Cottrell Propst said. “Historically, the industry has not reported consistent and complete data for venting and flaring to us. For that reason, a key focus of the draft rule is data collection.”

occurring, the second phase of the draft rule would implement gas capture requirements.

“Based on the data collected on phase one, the draft rule will establish an enforceable target for operators to reduce natural gas waste,” Cottrell Propst said.

Phase two of the rule could begin by 2022 and run through 2026. Cottrell Propst said the department is aiming to reach a statewide gas capture rate of 98 percent by the end of 2026. Each operator would need to reduce their methane waste by a fixed amount every single year to reach the 98 percent gas capture rate by the end of 2026, but Cottrell Propst said the rule leaves a lot of flexibility to the oil and gas operators in how they reach that goal.

“We want the environmental outcome,” Cottrell Propst said. “That’s important to industry, they made the point to us over and over again that technology is changing and they want to be able to incorporate the latest and greatest, the most efficient, the most cost-effective, the most environmentally protective technologies. So we’ve tried to create an environment where that is possible and that can change over time.”

The state Environment Department had to get creative in its draft rules to target methane. The state doesn’t have the regulatory authority to target methane specifically in its regulations, because the state’s Air Quality Control Act ties NMED’s air quality regulations to the federal EPA standards, and doesn’t allow the Environment Department to set air quality standards that are more or less stringent than the EPA’s.

Instead, NMED is targeting ozone precursors, such as volatile organic compounds (VOCs) and oxides of nitrogen (NOX).

“Ozone is the pollutant we’re targeting, and ozone is formed from the combination of VOCs and NOX that come from the oil and gas industry,” NMED Secretary James Kenney said. “When we control VOCs, we control methane emissions, so we have a co-benefit.”

NMED is only able to implement targeted regulations for ozone precursors in specific counties where the ozone levels have reached 95 percent of the federal standards for ozone. There are currently seven counties in the state where the ozone levels are high enough to trigger NMED’s regulations. Those counties are Eddy, Lea, Rio Arriba, Sandoval, San Juan, Doña Ana and Valencia.

NMED’s draft rules could result in a 77,000 ton reduction in VOC emissions and a 21,000 ton reduction of NOX. Kenney said the regulations would put more requirements around reporting and monitoring on companies that are emitting more methane or that use less efficient equipment, while incentivizing companies to upgrade their equipment and emit less.

“We’re not prohibiting any of those options, but trying to encourage people to move to a less-emitting greener operation, if you will,” Kenney said.

Both NMED and EMNRD looked to incentivize technological solutions to help with data collection, monitoring and compliance, something that both departments are struggling with after years of cuts under the previous administration which eroded both department’s budgets.

“Resources are a big concern for the department,” Kenney said. “We don’t have the resources to ensure compliance with every well, tank, compressor station, gas plant, etc. There comes a point where you have to rely on technology, and we embrace that concept.”

Under the draft rules, EMNRD’s Oil Conservation Division (OCD), for example, would create the Advanced Leak And Repair Monitoring (ALARM) program, which encourages oil and gas operators to conduct flyovers in the oil field to spot methane leaks within their own footprints and even among other operators.

“We needed a mechanism that would be sustainable for us in order to implement this rule,” said OCD Director Adrienne Sandoval, adding that “operators are certifying to us that they’re in compliance with the rules, and we’re not always having to assert that they’re out of compliance.”

We recognize that we have a limited number of staff and so record-keeping, reporting and monitoring is going to be a huge component of this rule,” she said.

The draft rules would also incentivize operators to invest in technologies that can make use of methane emissions. Kenney pointed to fuel cells, “which is something that we’re very interested in seeing develop as a result of this rule.”

“Fuel cells convert — not combust — methane into electricity,” Kenney said. “We want to see more next-generation concepts coming about from our rule incentivizing those technologies.”

Environmental groups reacted to the draft rules by emphasizing the need to address methane emissions in the state, and expressing cautious support for the draft rules.

“With these proposals the Lujan Grisham administration is taking an important step toward comprehensive rules that reduce methane pollution and waste,” said Jon Goldstein, director of energy regulatory & legislative affairs at the Environmental Defense Fund, in a statement. “We will be reviewing the proposed regulations carefully to ensure they live up to the promise of the Lujan Grisham administration to minimize the impact of oil and gas operations on the climate and the health of New Mexico’s communities and families.”

But Diné CARE executive director Carol Davis said the draft rules do not address some other sources of methane emissions.

“Ozone pollution made worse by climate change poses a serious threat to the health of all New Mexicans, but disproportionately impacts children, Native Americans and those living in poor, rural communities. In fact, more than half of all Native Americans in San Juan County – about 24,600 people – live within a mile of a well site,” Davis said. “A strong, comprehensive methane rule is critical for climate and environmental justice for the Navajo Nation and for all New Mexicans. While we appreciate Gov. Lujan Grisham moving this draft rule moving forward, her administration must close the loophole for low-producing wells, most of which are located in our Navajo communities and the San Juan Basin.”