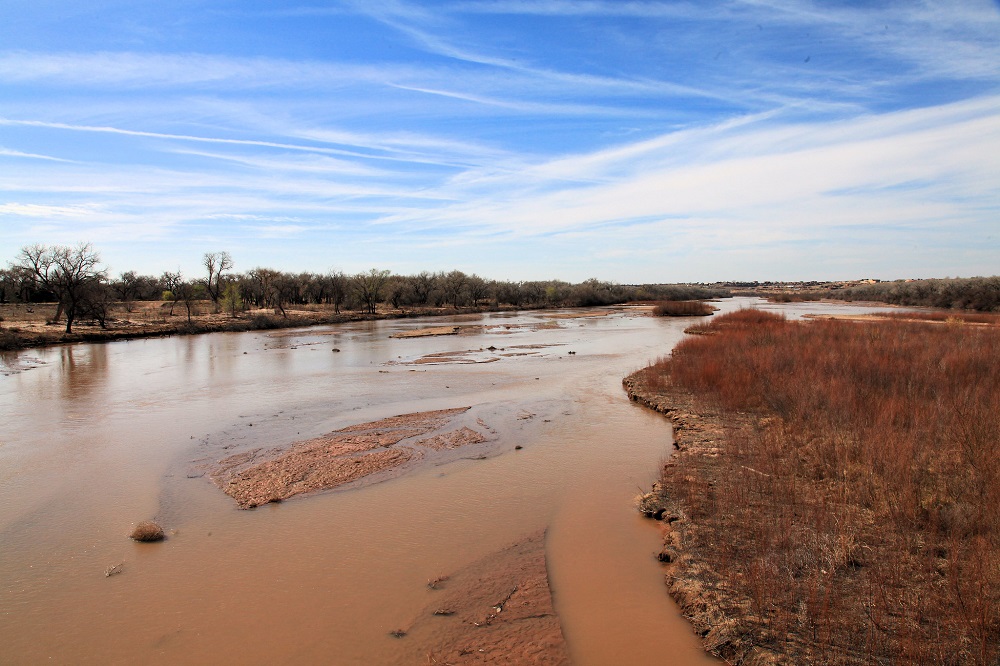 Climate change isn’t in the future for New Mexico—it’s already here and impacting families of color, according to climate change experts.

“Climate change is touching into every aspect of life and all of our neighbors’ lives,” she said.

According to a Yale Project on Climate Change and George Mason University Center for Climate Change Communication report, communities of color are likely to disproportionately feel climate change more than white communities due to socioeconomic inequities. Communities of color are likely to be more vulnerable to heat waves, extreme weather events, environmental degradation and the resulting job opportunity dislocations, the report said.

Brown said she believes the first aspect of climate change to have the greatest impact on families of color in New Mexico will be the intensity of forest fires in the state.

This week forest fire smoke from western states has affected skies and air pollution in the eastern part of the U.S. and the Bootleg Fire in Oregon is so intense it is causing its own weather.

“I think we’ve already seen some of that with fires that have drastically changed some of the areas where people live. Vegetation that won’t come back affects the watershed, affects irrigation, animals that live here. What we’ll see with exceptional drought, we see right now,” she said.

Families of color who live in Albuquerque are also feeling the effects of climate change and the ensuing severe drought, Brown said. Her organization has been involved in tree plantings, as part of the City of Albuquerque’s initiative to plant thousands of trees in city neighborhoods. Brown said New Mexico Interfaith Power and Light has focused its efforts in the International District in Albuquerque because the area acts as a “heat sink” due to a lack of vegetation and too much concrete, she said.

Heat sinks, which occur in urban settings, are more likely to affect low income and diverse communities such as the International District, Brown said.

“As it gets hotter, heat sinks will affect mental and emotional health. You get really depressed if there’s no shade, no beauty or coolness. It really impacts children and their well being. Trees are really important to children for that green and that beauty,” she said.

Brown said there are places around New Mexico where wells are running dry. She said the state needs to allocate money and put more effort toward water preservation, adaptation and mitigation.

“Even knowing how much water we have,” she said. “Economic diversification and water planning are two huge areas.”

Water is “huge” but so are methane emissions and it is one of New Mexico Power and Light’s priority policy issues, Brown said.

In southeast New Mexico, where significant oil and gas extraction takes place in the Permian Basin, Brown said the “folks suffering the most” are those who have less access to income. She said families of color who are low-income suffer from pollution-related health issues such as asthma.

With the anticipated increased heat from climate change, she said, low income families of color will suffer the most because they often don’t have evaporative coolers, insulated houses or air conditioning.

In another corner of the state, local organizer Nena Benavidez works with the social justice organization New Mexico CAFé  in the Silver City area, the home of the Santa Rita Copper Mine. As the state plans to transition to meet legislation enacted to plan for a 50 percent renewable energy standard by 2030, Benavidez is focused on the transitioning economy for rural locales, such as Silver City, which has been dependent on the metal mining industry since the late 1800s.

The Energy Transition Act is about phasing out the state’s reliance on coal, not copper, but New Mexico CAFé is concerned about what happens to jobs in rural communities, such as Silver City as the planet heats up. Johanna Bencomo, executive director for New Mexico CAFé, said immigrants and people of color in rural areas frequently work outside in the extractive industries or agriculture.

“They are clearly going to be impacted by an increasingly hotter planet. We had water in the Rio Grande [River] for a month,” she said.

Bencomo said this summer, which has been one of the hottest and driest on record, impacted people of color picking green chile, as well as people of color working in the copper mine and in dairies.

New Mexico CAFé is pushing for a “just transition” to a green economy especially for the state’s rural communities. Not everyone wants to leave their small towns for a bigger city, Bencomo said.

“Rural communities are held alive and vibrant by people of color and immigrants,” Bencomo said.

The economic impacts of climate change on rural communities in New Mexico can be felt by families of color in how they recreate, Benavidez said. She said many rural families of color can’t afford a traditional vacation, so they camp for a week along the Gila River.

The Gila River was the subject of a decades-long debate over how millions of federal dollars should be spent, whether the state should allocate it for a massive diversion project or whether the state should use the money to pay for various conservation riparian projects. At the heart of the argument was the future of the Gila River and how to best protect it in the coming years as climate change threatens the state’s river and stream flows.

Related: After a long battle, the Gila River Diversion project comes to an end

Bencomo said one of the biggest impacts of climate change in southern New Mexico is a cultural one because when the Rio Grande River is flowing, “it is mostly families of color who are floating the river, doing picnics by the river.”

“Families [of color] who don’t have means to go on vacation every year get to enjoy the river for one month,” she said.

The Rio Grande River’s lack of flow is “detrimental to the wellbeing of our community,” she said.

An increase of climate refugees crossing the border is another concern for southern New Mexico, Bencomo said.

“We are a border community. We will be seeing more immigrants coming to our borders because of environmental issues, because of climate change. We’ll see more climate refugees that are disproportionately affected even though the U.S. is one of the leading contributors of the cause [of climate change]. We’ll see more of those immigrants devastated by natural disasters,” she said.

Mario Atencio, who is Diné [Navajo] and a board member of Diné C.A.R.E. (Citizens Against Ruining our Environment), said the Navajo, who are still living on their traditional land, are already being dispersed from their homeland due to climate change.

“Even now, people are selling their cows. It’s kind of happening. There are no jobs, you can’t raise and sustain a herd of cows, what else are you going to do? You’ve got to go work. It’s not going to be a mass migration. It’s happening very slowly, a climate change diaspora,” he said.

Atencio said Navajo believe they emerged from the land and have lived on Navajo land since time immemorial. He said a forced relocation, due to climate change, would be “genocidal.”

He said some Indigenous people who rely on medicinal plants are not finding those plants due to climate change and worsening drought, which he said is a matter of food security and food sovereignty.

“Navajo have a relationship with plants and animals. It is something that has to be remembered as a form of sustainability,” he said.

But, the biggest climate change challenge facing the Navajo will be sustainable water resources, Atencio said. Robyn Jackson, Diné [Navajo] and climate and energy outreach coordinator for Diné C.A.R.E., said a number of Navajo farmers did not plant this year because of the significant decrease in water due to the severe drought.

“It’s a trend people have been seeing over the years,” she said.

Not being able to plant, as Navajo people have done for generations, affects mental health because many dry land farmers received their seeds from their grandparents. She said maintaining the generational traditions are a reminder of the Navajo way of life.

Navajo and other Indigenous people have had to suffer the effects of environmental racism for generations. Jackson said that during the 1970s, the U.S. government named areas of the Navajo Nation a national sacrifice zone to meet the energy needs for large cities in the southwest region.

“Uranium, coal, oil and gas, a lot of what was extracted from there produced a lot of electricity that ran pumps to send electricity to other cities like Phoenix and Las Vegas and allowed those cities to grow. That’s been an historical injustice,” she said.

Oil and gas wells have been in operation on Navajo land since the 1920s, Jackson said. The extractive industries have brought “huge environmental impacts” with air and water quality issues and now that some, such as the coal industry, are in decline and closing, this brings additional economic impacts as well, Jackson said.

In a land where water is scarce and a third of Navajo families lack electricity and running water at home, the Navajo’s water issues have been exacerbated by different types of mining that American industry has extracted on Navajo land, including uranium mining and strip coal mining, Jackson said. This has left the Navajo with some contaminated water sources. She said there are over 1,000 abandoned mines on Navajo land.

“If you have to haul water to have 20 seconds of water running [as health officials advised during the COVID-19 pandemic] that is a huge amount of water but you don’t understand that if you‘re not in that situation,” she said.

There is also another aspect to Navajo life that climate change could impact, which is the potential disruption of being able to hand down traditional beliefs, as well as traditional Navajo land, to future generations.

“I think for a lot of individuals brought up with traditional Navajo beliefs, thinking about future generations and what customs, knowledge, teachings we want to pass on is a part of our thinking; thinking about not only grandchildren but those who come after, to have a place to live life as we’ve known it,” Jackson said.