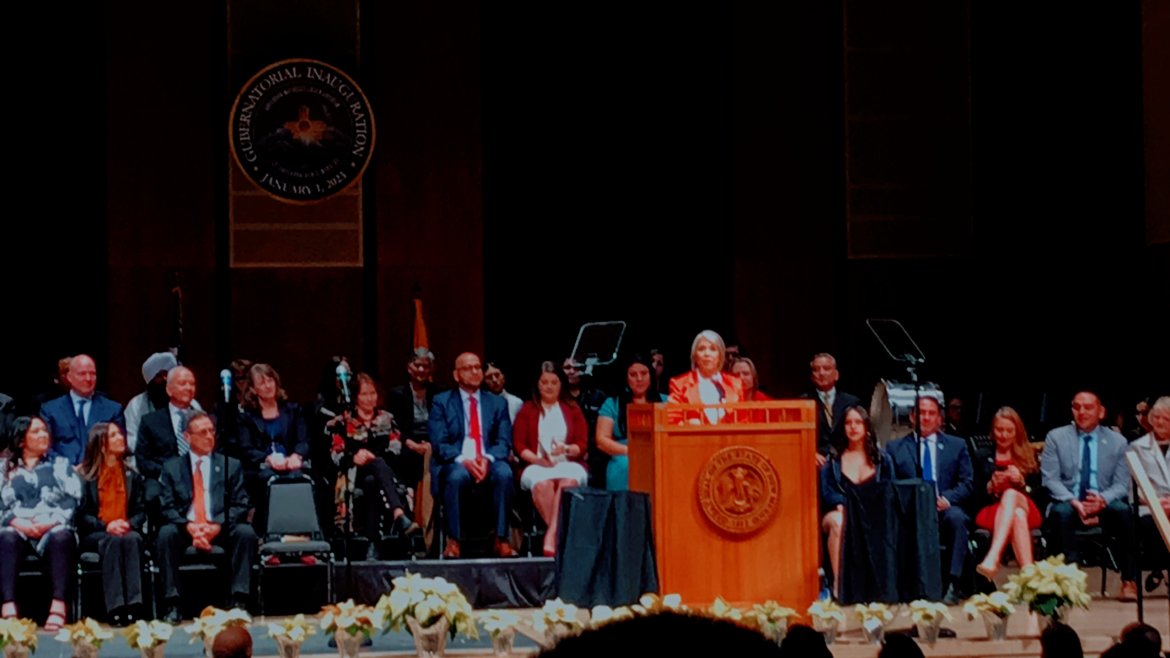 Gov. Michelle Lujan Grisham began 2023 with her inauguration at the Lensic Theater in Santa Fe.

Her inauguration address featured goals for the upcoming year, including fighting homelessness, addressing the ongoing opioid epidemic and setting up a state healthcare authority.

“I am indescribably proud of New Mexicans,” Lujan Grisham said in her inaugural address. “Our fortitude, our compassion, our dignity – it’s who we are. It’s who we’ve always been. And now, in this moment of opportunity, we are, in fact, launching our state into the bright future we have always deserved – it’s happening today, all around us.”

These requests include Lujan Grisham working with the Legislature to combat homelessness in New Mexico, setting up a state healthcare authority and to increase the public school budgets to cover healthcare premiums for teachers and other school staff.

“In the coming years, with a new focus and funding to match, we will fight the scourge of homelessness that afflicts so many New Mexicans who are suffering,” Lujan Grisham said. “Building serious momentum on affordable housing can be a hallmark of the next four years, and I look forward to working hand-in-hand with the Legislature to achieve it.”

Lujan Grisham plans to work on fighting the opioid epidemic including expanding behavioral healthcare including substance abuse treatment, “as an urgent moral priority.”

She is also asking the Legislature to create the New Mexico Healthcare Authority which she described as “a comprehensive entity that will expand access to services and cut through the red tape that keeps too many New Mexicans from getting the affordable, high-quality care they need. This authority will streamline the government’s efforts to support families and their health care needs while more effectively holding insurers accountable.”

Lujan Grisham described the current generation of young school-age children as “New Mexico’s greatest generation” due to efforts made to curb generational poverty including free childcare and universal pre-K.

“We all know better outcomes begin at the earliest age,” Lujan Grisham said. “ Healthy, happy families are the bedrock of our success as a statewide community. Our thriving Early Childhood Education and Care Department is the envy of the nation; if we stay the course, we will, in fact, make this generation of young school-age children into New Mexico’s greatest generation.”

Lujan Grisham also reiterated plans to codify abortion rights in New Mexico, an announcement that garnered her one of several standing ovations.

“I vow today that we will codify Roe v. Wade as the law of the land within our borders,” Lujan Grisham said. “Never again, for all of time, will a woman in the state of New Mexico have anything less than full bodily autonomy and freedom of choice.”

“We are creating new jobs at a rate not seen in this state in many, many years; and we are poised to invest even further in the job training and workforce development programs that amplify the empowerment we have possible through universal free college and trade school,” Lujan Grisham said. “College enrollment in New Mexico increased this year for the first time in a decade; that’s only the beginning. This administration is foundationally committed to keeping our best and brightest right here in New Mexico, and to making sure that any individual, no matter their age, has the chance to grow and learn and become who they are meant to be.

Lujan Grisham ended her inaugural address by talking about how she plans to curb violent crime in New Mexico.

She plans on doing so by getting “more community-first police officers on our streets and (getting) more violent offenders off them,” she said.

“We will continue to invest aggressively in the safety and well-being of our communities, and in the high-quality training of the officers who serve them, because New Mexicans expect and deserve to live their lives free from the fear of gun violence and violent crime,” Lujan Grisham said.

Lujan Grisham ended her inaugural address on a hopeful note.

“I am firm in my belief that we have both a clear moral vision and the tenacity to fight for every single improvement that will benefit workers and families. I have hope. I know you do too,” Lujan Grisham said.

The campaigns featured advertising campaigns across media from television and radio to social media attack ads on both sides and with the current President Joe Biden stumping for Lujan Grisham in the days leading up to Election Day and former President Donald Trump announcing his Ronchetti endorsement via a social media account.