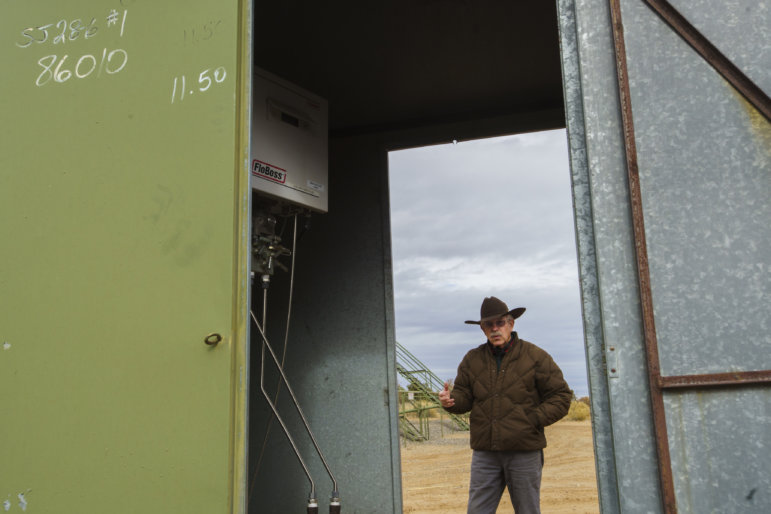 FARMINGTON — On Oct. 21, 1921, residents in Farmington heard a hissing roar as a natural gas well 10 miles upriver blew skyward — the debut of the first commercial well in the coal-bed formation known as the San Juan Basin. This stream of natural gas would transform northwestern New Mexico from a sleepy agricultural region to a community that triumphantly built itself on fossil fuels. But in October 2021, exactly one week and 100 years after this first lucky strike, a conference held to commemorate the first century of oil and gas development in the basin was decidedly less triumphant.

Tiffanie Jones was a few tanks of gas into her drive from Tampa, Florida, to Cheyenne, Wyoming, when she found out her travel nurse contract had been canceled. Jones, who has been a nurse for 17 years, caught up with a Facebook group for travel nurses and saw she wasn’t alone. Nurses had reported abruptly losing jobs and seeing their rates slashed as much as 50% midcontract. “One lady packed up her whole family and was canceled during orientation,” she said. Many career nurses like Jones turned to travel gigs during the pandemic, when hospitals crowded with covid-19 patients urgently needed the help.

How much do we know about our watersheds? New study says gaps in knowledge exist because of ‘bias’ in stream gauge placement

Corey Krabbenhoft saw the ebbs and flows of New Mexico’s rivers growing up in Albuquerque. From that experience, she knew how many of the waterways in the state only flow at certain times of the year. As a postdoctoral researcher at the University of Buffalo, she is the lead author on a new paper published in the journal Nature Sustainability that looks at stream gauges, particularly in what the authors call “bias” in placement. Krabbenhoft explained that the study doesn’t focus on where the stream gauges are located, but rather what types of rivers are represented globally when it comes to monitoring with gauges. This paper documented that ephemeral waters, headwaters and waterways in protected areas like wilderness areas are less likely to have stream gauges on them, which can lead to a gap in knowledge about how the river systems work.

In contrast, larger rivers that often have dams on them regulating the flows and usually pass through more populated areas are more likely to have these gauges.

‘This is a U.S. problem:’ Families gather in Farmington to raise awareness about MMIWR

Rose Yazzie last spoke to her daughter, Ranelle Rose Bennett, in June of last year. They were talking about a birthday party for Bennett’s daughter, Yazzie’s granddaughter.

Yazzie recalls that her daughter hugged her for longer than usual. Looking back, she wonders if she missed the signs that something was wrong. She hasn’t seen or heard from her daughter since, and Yazzie is frustrated with the lack of attention the police have given the case.

Bennett, Diné, is one of an unknown number of missing or murdered Indigenous people in New Mexico whose case remains unsolved.

Yazzie attended a rally on Thursday in Farmington to raise awareness about the number of Native Americans who are missing or murdered. This rally took place on the National Day of Awareness for Missing and Murdered Indigenous Women and Girls and on what would have been Zachariah Juwaun Shorty’s 25th birthday.

New Mexico car dealerships will soon be required to stock a small percentage of electric vehicles under the state’s newly adopted Clean Car Rule. The Environmental Improvement Board and Albuquerque-Bernalillo County Air Quality Control Board both approved the new rules upon the conclusion of a two-day meeting this week. The meeting allowed the two entities to hear from environmental advocates, utility representatives and auto dealers. Under current laws, states are able to choose to either adopt California’s clean car standards or follow the federal requirements. The new rules state that seven percent of model year 2026 vehicles sold in New Mexico must be electric.

The New Belen Wasteway is an example of how infrastructure funding can accomplish the shared goals of resiliency and protecting water for both people and the ecosystem, Deputy Secretary of the Interior Tommy Beaudreau said during a tour of the facility this week in Belen. The New Belen Wasteway is located at the intersection of several canals and allows water managers to better regulate the flow of water for irrigation as well as returning water to the Rio Grande to meet the needs of the endangered silvery minnow. Beaudreau and U.S. Rep. Melanie Stansbury, a Democrat representing New Mexico’s 1st Congressional District, visited the site on Wednesday and spoke about funding for water projects that is now available through the infrastructure package President Joe Biden signed in November. They met with officials from various groups including the U.S. Bureau of Reclamation and the Middle Rio Grande Conservancy District. MRGDC Chief Engineer and CEO Jason Casuga told them that the district strives toward what he describes as a “triangle of equal sides.” Those equal sides are the commitments to the irrigators, commitments to the ecosystem and commitments to other regions as laid out in the Rio Grande Compact.