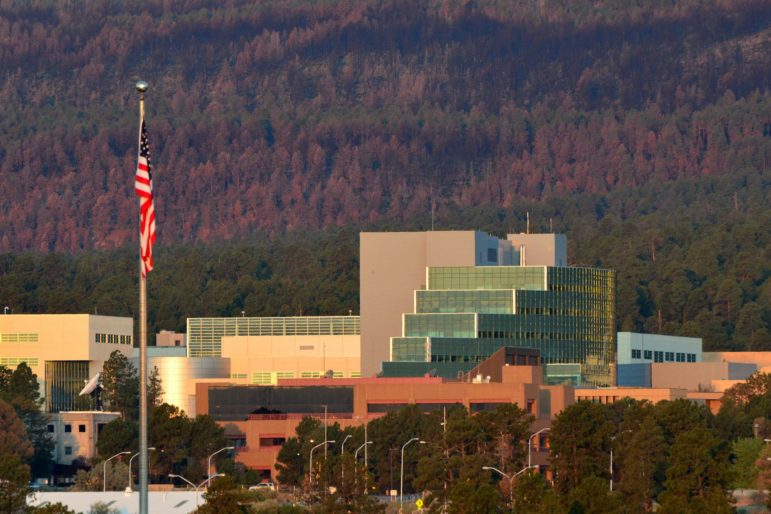 By Hannah Grover | 16 hours ago

Hydrogen will be a key energy source in meeting the state’s goals of net zero by 2050 and at least 45 percent reduction from 2005 levels by 2030, according to New Mexico Environment Department Secretary James Kenney. Kenney spoke to NM Political Report after his agency, as well as the Energy Minerals and Natural Resources Department and the Economic Development Department, signed a memorandum of understanding with Los Alamos National Laboratory and Sandia National Laboratories with the stated purpose to “facilitate the development of sound science, advance technologies and inform national/state policies that could enable a path to zero carbon hydrogen.”

The national labs are no strangers to hydrogen. John Sarrao, deputy director for science, technology, and engineering at Los Alamos, said the lab has been working on hydrogen for about 40 years and has developed technology that is currently being deployed in pilot projects. Chris LaFleur, an engineer at Sandia, said the lab’s work looking at hydrogen as a clean energy alternative dates back more than 15 years and one of the areas that the lab has been focusing on is storage materials. She said the lab’s hydrogen expertise is part of its core mission.

LaFleur said, in terms of research into storage, Sandia has been looking at storing hydrogen molecules “within the latticework of other materials.” She called this solid storage, as compared to what is currently more common—storing pressurized hydrogen in a tank.

There were sure signs a sense of normalcy had returned to the state Capitol: Protests and demonstrations. As the 2022 legislative session got underway Tuesday in a Roundhouse open to visitors who provided proof of full vaccination against COVID-19 — including a booster — activists gathered both inside and outside the downtown building, carrying signs and rallying for their causes. The New Mexico Freedom Alliance staged a morning protest of the vaccination mandate. A woman held a sign that said, “Proof of Vaccination is Anti-American.” The government should not require anyone to get the shots, she said.

The governor’s 2022 State of the State, annotated

Once again, NM Political Report joined New Mexico PBS and other news outlets in annotating Gov. Michelle Lujan Grisham’s State of the State speech (as prepared for delivery). Our reporter Andy Lyman joined journalists from other outlets in the state to provide context and fact check comments made by the governor. See the full speech, as prepared for delivery, with annotations below.

If you plan to attend this year’s 30-day legislative session at the state Capitol, here’s a piece of advice: Don’t forget a mask or proof of vaccination and a booster shot. The Roundhouse will be open to the public when the Legislature convenes Tuesday, but with safeguards designed to prevent the spread of COVID-19 as the threat of the virus continues to hang over New Mexico nearly two years after it arrived. The open doors stand in contrast to the tightly shuttered New Mexico Capitol during last year’s 60-day session, when both the pandemic and fears of violence erupting in response to the Jan. 6 insurrection at the U.S. Capitol prompted state lawmakers to increase security measures. Another change from most previous sessions: Weapons are prohibited, though small pocket knives will be permitted.

Sen. Antoinette Sedillo Lopez, D-Albuquerque, and Rep. Joanne Ferrary, D-Las Cruces, are the lead sponsors on a joint resolution that nearly two dozen of their colleagues have already voiced support for. The legislative session starts Tuesday and the joint resolution is among the pieces of legislation filed prior to the start. This is the second year that they have sponsored a joint resolution seeking to amend the state’s bill of rights to include environmental rights. This is colloquially dubbed the “Green Amendment.”

Budget? What budget? Though 30-day sessions are specifically designed for lawmakers to create and approve a financial blueprint for the next fiscal year, the state’s growing crime problem, public education woes and continuing efforts to battle the pandemic likely will take center stage when the New Mexico Legislature goes into action Tuesday afternoon. With more than $1 billion in new revenue, plus additional federal pandemic relief funds to distribute, the 2022 session won’t be a battle over crumbs, but more likely a tug-of-war of ideas and ideals as Gov. Michelle Lujan Grisham and many members of the Legislature prepare to run for re-election in November. In all, New Mexico’s budget will approach $8.4 billion to $8.5 billion in fiscal year 2023.