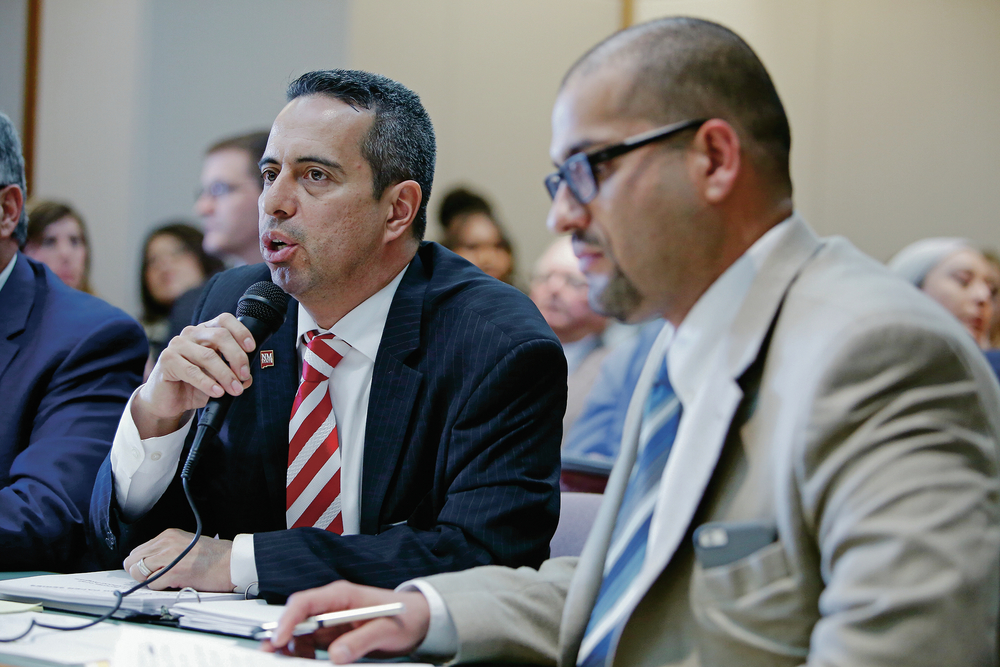 Supporters of a popular idea among Democrats — a proposed constitutional amendment that would take between $153 million and $163 million a year in the first three years from the state’s land grant endowment to expand early childhood education — are having a difficult time mustering the votes to get it through the state House of Representatives.

House Joint Resolution 1 has been waiting all week to get a floor vote. Word got out Friday that the resolution once again would not be heard, even though it was the top item on the House calendar.

The measure would amend the state constitution to draw less than 1 percent a year from the endowment to pay for early childhood education.

The sponsors of the proposal, Democratic Reps. Antonio “Moe” Maestas and Javier Martinez, both of Albuquerque, said Friday they are confident their early childhood measure will make it through the House. Even though Democrats control the House 38-32, passing a resolution isn’t as easy as other legislation.

Because it involves amending the state constitution, HJR 1 needs not just a simple majority of those present, but a majority of all elected members — in other words, 36 voting in favor.

One Democrat, Rep. Jim Trujillo of Santa Fe, has been absent for much of the session because of health problems. It’s not known when he’ll return to the Capitol.

And another Democrat, freshman Rep. Candie Sweetser of Deming, told The New Mexican that she won’t vote for the measure.

So that brings Democratic support for the resolution down to 36 votes — the minimum number needed.

In recent days, there have been absences by other Democrats. One of those was sponsor Martinez himself, who was out for two days because of a medical emergency in his family.

Maestas said he hoped to get a handful of Republican members to vote for the resolution, but if any are supporting it, they haven’t told anyone.

The bill has survived on straight party-line votes in the three House committees that have heard it.

Republicans — as well as Democrats who oppose it — say that taking the money could deplete the $15 billion endowment, which is supposed to last in perpetuity.

“It could dry up the permanent fund,” Sweetser said.

One of the resolution’s supporters, Allen Sánchez, president of CHI St. Joseph’s Children, said the needs in early education are so great that the resolution must be approved.

The measure would have to clear both houses of the Legislature to make the ballot in 2018. Voters then would decide on it.

Correction: This story originally said the proposed constitutional amendment that would use money from the state’s land grant endowment to expand early childhood education would use $112 million from the fund each year. The fiscal impact report on the resolution estimates between $153 million and $163 million in the first three years.