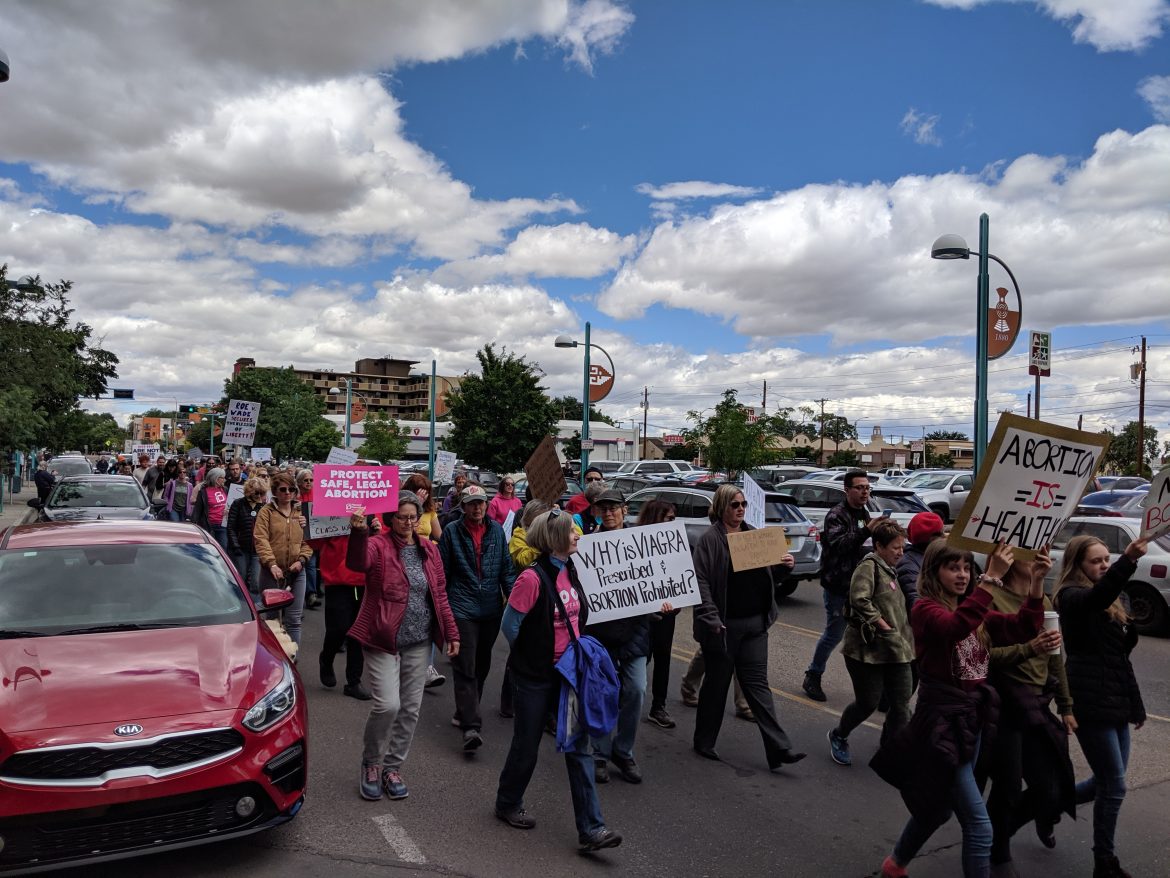 When New Mexico women are in a crisis and need to terminate a pregnancy, all too often they must drive hundreds of miles to reach a clinic that provides abortion.

Clinics that provide abortions are only located in or around the three largest cities in New Mexico.

While some obstetric and gynecological doctors as well as some general practitioners will perform an abortion privately, the vast majority of abortions are provided in specific clinics, Dr. Eve Espey, chair of the Department of Obstetrics and Gynecology at the University of New Mexico School of Medicine, told NM Political Report.

When women seek an abortion, they are often in a time of crisis, she said.

With more than one million women living in New Mexico, such limited resources for abortion services impacts a significant portion of women who are child-bearing age in the state. The problem disproportionately affects low-income women, rural women and women of color, Espey said.

“Like with health care inequities in general, reproductive injustice has more of an impact on women of color, rural women and low-income women,” Espey said Tuesday.

A 2013 study, “Payment for Abortion Care by U.S. Women,” published in the journal, Women’s Health Issues, states that abortion patients are disproportionately poor.

Kat Sánchez, a policy associate with the women’s rights organization Young Women United, said restrictions on abortion and other reproductive health issues impact women who are otherwise marginalized in New Mexico. That includes a lack of access in rural counties.

“Though New Mexico has legal protections for abortion, the rural nature of our state and lack of healthcare providers can still make access complex,” she said via email.

Travel costs can also burden women. Those women must arrange for time off from work to drive what is often hundreds of miles and potentially incur lost wages.

And they may need to make child care arrangements as well. Fifty-nine percent of abortions in 2014 were obtained by patients who had previously had at least one birth, according to the Guttmacher Institute, a New York City-based research and policy organization focused on reproductive health and rights.

Rural-based patients must find transportation to and from the provider and possibly manage the cost of lodging. Nationally, the procedure can cost anywhere from $350 to $950 if the woman needs a first-trimester abortion, according to Planned Parenthood. In addition to the cost of the procedure itself, those additional travel costs add to the overall expense.

Espey said that in Albuquerque,  a first-trimester abortion costs around $500. How long it takes to gather the resources necessary for both an abortion and long-distance travel can have a larger impact.

A second-trimester abortion can range between $1,000 and $2,000, depending on the gestational age, Espey said.

Third-trimester abortions are rare – only one clinic in Albuquerque performs it along with a few other clinics nationwide, Espey said.

But if a woman needs a third-trimester abortion, the expense is significantly higher.

The 2013 study found that one-third of the 631 women sampled had to delay or forgo paying bills to pay transportation costs related to getting an abortion.

How do women cover the costs?

The 2013 Women’s Health Issues study found that 60 percent of the women sampled looked to their male partner for financial help.

But because of the Hyde Amendment, passed by Congress in 1976, in reaction to the U.S. Supreme Court’s 1973 Roe v. Wade decision, federal funds can’t be used unless the pregnancy endangers the woman’s life or if the pregnancy was the result of rape or incest.

“They’re referred to come to Albuquerque,” Massey said. “But they have to find their own way. There’s transportation, gas, lodging. They have to pay for those services on top of those other costs.”

Having private insurance is no guarantee abortion costs will be covered.

The 2013 study found that 64 percent of the women sampled at abortion clinics around the country had some type of insurance, whether Medicaid or through a private provider. But 69 percent paid out-of-pocket for their abortion care.

Why are there so few providers in New Mexico?

Doctors who might provide abortion in rural areas are far less likely to do so because of the stigma, said Espey.

The biggest factor is the doctor’s reputation and the impact it would have on the reputation of his or her practice. A doctor would also need consent from the group of doctors he or she practices with as well as consent from all the staff. Another factor is that rural communities are more likely to lean conservatively, Espey said.

Even medical abortion, through the use of a pill, which gained FDA approval in 2000, is something that rural New Mexico doctors are uneasy with providing, Espey said. There are regulations doctors need to learn and equipment that needs to be purchased in order to be able to give a woman the abortion pill to terminate an unwanted pregnancy. But the biggest obstacle is the fear of community disapproval or moral objections within the practice itself.

“Because we do abortion training at UNM, we have a center of excellence in family planning. We try to support residents who practice in rural locations but they don’t want to deal with all the hassle and to deal with the fact that a lot of people are against it. It’s easy to become a target,” Espey said.

The problem can affect more than rural communities. Santa Fe, with a population of nearly 85,000 – and 52.4 percent of that population are female – had a single abortion provider. That provider retired in 2011.

“Often a single abortion provider retires as that person in Santa Fe did and that provider goes away,” Espey said.

Now one clinic in Santa Fe offers medical abortion, but for other types of abortion services, a woman has no choice but to drive to one of three clinics in Albuquerque.

New Mexican women are not alone on this issue. Neta Meltzer, strategic communications manager for Planned Parenthood of the Rocky Mountains, says that according to 2017 research, nearly 90 percent of all U.S. counties lack clinics that provide abortion care.

Access to abortion limited in NM That means that nearly 40 percent of all U.S. women of reproductive age have to travel to access care, Meltzer said.