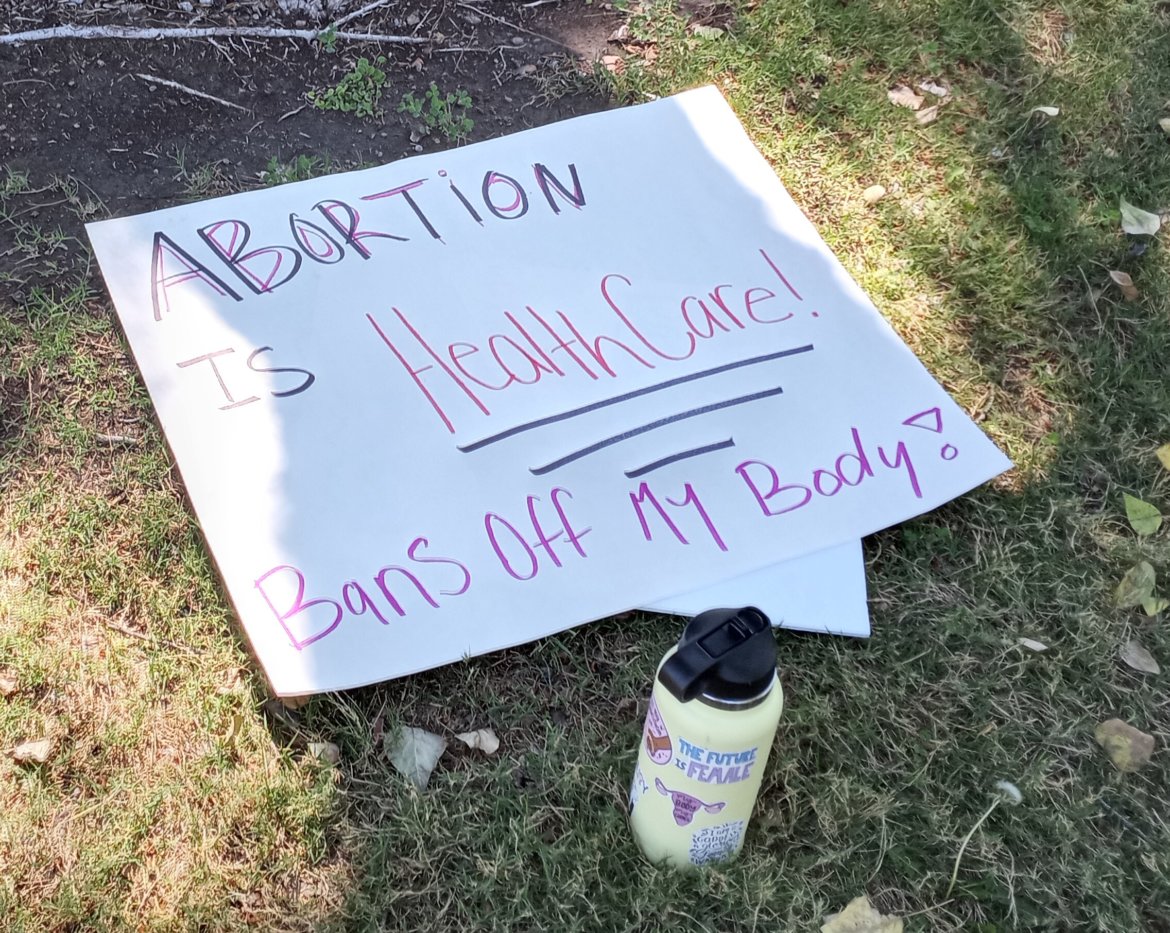 “As women and people with uteruses, we are second class citizens in our own country. Our patients will be deeply harmed by this decision,” she said.

Many during the press conference stressed that abortion is, and will remain, legal and safe in New Mexico. The seven abortion clinics in the state are open and continue to provide reproductive healthcare. Charlene Bencomo, executive director of the reproductive advocacy organization Bold Futures, said her organization and others are collaborating on opening a reproductive health care clinic to expand care in Doña Ana County.

Kayla Herring, director of Public Affairs for Planned Parenthood of the Rocky Mountains, said PPRM is also working to expand care across the state.

But, Khan warned that this decision will increase the maternal mortality and morbidity rates for people of color in the U.S., which are already some of the highest in the world among industrialized nations.

Herring said that since Texas’ six-week gestational ban went into effect in September 2021, New Mexico abortion clinics have seen 1,700 Texas patients when, in years prior, clinics in New Mexico saw around 400 patients travel from Texas.

“We are watching a public health emergency in the making,” she said.

Herring pointed to the strain New Mexico’s healthcare system has already suffered due to the  COVID-19 pandemic and the state’s chronic shortage of health care providers.

“When abortion health centers are at capacity, we’re going to see stress on the [entire] health care system. When patients are not able to go to Planned Parenthood or another abortion center for birth control, pregnancy exams, STI testing and treatment, we’re going to see a strain across New Mexico,” she said.

Ellie Rushforth, an attorney with the American Civil Liberties Union of New Mexico, said the public health emergency has been a crisis coming for a long time.

“No matter how many providers in New Mexico and other states there are that have protected our rights, the demand will never be met. The people who do not have the resources, young people, Black people, Indigenous people, people of color will not be able to leave their state to get the care they need. The influx of patients to New Mexico, those are the people who can afford to leave [their home state]….Obviously, this is a public health care crisis in the making and has been in the making for years,” she said.

Governor Michelle Lujan Grisham said this is the moment “we have long dreaded,” and called it a “war on women.”

Lujan Grisham pushed for a New Mexico bill in 2021 that eventually repealed an antiquated 1969 abortion ban that had long remained dormant in New Mexico’s criminal code. Democratic legislators swept the bill through, and Lujan Grisham signed it, before the Legislature ended its 60-day session that year. State Sen. Linda Lopez, D-Albuquerque, who sponsored the bill, spoke during the press conference on Friday and said this is a day “that hurts for many of us.”

State House Floor Leader Javier Martinez, D-Albuquerque, said this is the first time his own children will lose a right their grandparents had. State Rep. Linda Serrato, D-Santa Fe, called the decision “outdated.”

New Mexico Republicans, however, cheered the decision. The Republican Party of New Mexico said it “welcomed” the Supreme Court’s ruling and claimed that scientific knowledge around the fetus has changed since Roe v. Wade. But the American College of Obstetricians and Gynecologists and 24 other medical groups filed a “friend of the court” brief in the Dobbs case stating that the Mississippi 15-week gestational ban under consideration was “fundamentally at odds with the provision of safe and essential health care, with scientific evidence and with medical ethics.”

Some warned during the press conference of an increase in the spread of misinformation in the wake of the decision.

While state Democratic leadership repealed the 1969 law that previously banned abortion, keeping abortion safe and legal regardless of the Supreme Court’s decision, some national organizations have noted that a law that explicitly protects abortion is not in state statute. Some states have been pushing to pass such laws to ensure protection of abortion rights.

Lopez and state House Speaker Brian Egolf, D-Santa Fe, said during the press conference that any new law introduced to explicitly protect abortion in New Mexico would have to be carefully considered. Rushforth said there is already case law and state Supreme Court decisions that explicitly provide protections for abortion in the state.

Egolf said during the press conference that there could be “unintended consequences” for such a law.

“For a long time, we have successfully explained abortion is healthcare. It should be treated like any other medical procedure so thought has to be given to separating reproductive healthcare and singling it out as a form of healthcare. It’s a big issue we need to think about,” he said.

The ruling appears to now make explicit that more than just abortion rights are at stake. Justice Clarence Thomas, in a concurring opinion, said that all prior Supreme Court decisions which the court decided based on the court’s understanding of the 14th amendment, should be revisited. He explicitly included Griswold v. Connecticut, a 1965 Supreme Court decision that struck down state bans on married people using contraception.

That decision was the first time the court ruled that the 14th amendment included a right to privacy in its due process clause and, therefore, individuals had the right to decide bodily autonomy regarding birth control.

Thomas also explicitly pointed to Obergefell v. Hodges, which recognized same sex marriage across the U.S. in 2015 and Lawrence v. Texas, which ended state bans on sodomy in 2003.

Kat Sanchez, co-director of policy for Bold Futures, said that challenges on LGBTQ rights will “not be surprising going forward.”

The Hyde Amendment is a rider that has been attached to every U.S. congressional budget since the 1970s. It prohibits federal dollars to be spent on abortion care. That impacts Indian Health Services since those clinics are federally funded.

Curley said that, as a result, the information and cultural knowledge around medicinal herbs Indigenous people relied on to control menstruation and to terminate a pregnancy has been lost. Tribal elder Noreen Kelly, Diné, said during the press conference that she was “angered” by the decision Friday morning and that in Indigenous communities, women were the decision makers in the household.

“No one had more power than the other,” she said.