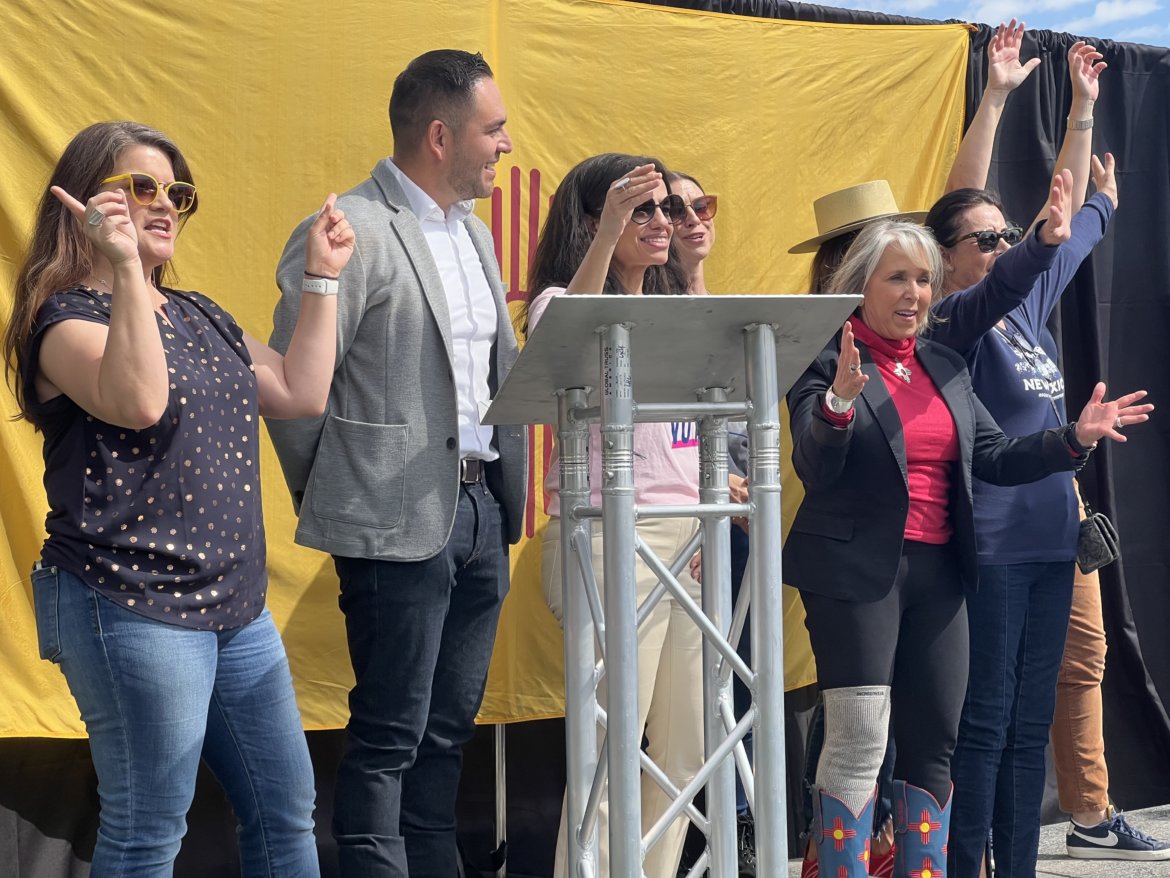 With 23 days before the November election, New Mexico Democrats held a rally with Planned Parenthood and NARAL Pro-Choice America national leaders in Las Cruces on Saturday to discuss the importance of abortion rights.

In May, NARAL Pro-Choice America, Planned Parenthood Action Fund and Emily’s List announced a partnership to spend what they call a “historic” $150 million on the midterm elections. Planned Parenthood Action Fund President Alexis McGill Johnson and NARAL Pro-Choice America President Mini Timmaraju both spoke at the rally in support of the Democrats running for office.

Anti-abortion protestors also turned out and circled the park during the rally holding signs expressing opposition to abortion rights.

Vasquez said during the rally that the U.S. Supreme Court has “taken us back to the Stone Age of American politics.” He said he supports codifying Roe v. Wade through federal legislation and that he is “proud to be a Roman Catholic Latino who supports the right to choose.”

Toulouse Oliver told a personal story of how reproductive rights affected her when she was a young college student.

“When I was 21 I got pregnant unintentionally and I had to make a really hard choice. I was working my way through college. It was a very difficult choice. I was looking at my entire future. I might never finish college. For me the right decision was to have my son, Christian, who’s now 25 years old. It was my choice,” she said.

When Lujan Grisham took the stage, she said elections are “harder and meaner and less about the truth than they’ve ever been.”

She said she was told she couldn’t put in a reproductive clinic in Las Cruces as a way to reference the $10 million she has promised to help build a reproductive healthcare clinic in the second largest city in New Mexico. That announcement was part of her second reproductive executive order this year.

“This is primary care; a holistic investment,” Lujan Grisham said.

Lujan Grisahm did not refer to her Republican opponent by name, but she made a reference to Ronchetti’s recent argument, announced through a TV ad, that he believes New Mexico voters should decide, through a special election, if abortion should remain legal in New Mexico.

“Is it fair to ask everyone? No. My healthcare is not subject to someone else’s approval,” Lujan Grisham told the crowd.

McGill Johnson said the U.S. Supreme Court overturned Roe v. Wade through the Dobbs decision more than 100 days ago. She said that, since then, 18 states have passed anti-abortion bans and, on average, abortion patients now have to drive 400 miles, one-way, to receive care. She said pregnant individuals in states that have bans now worry a miscarriage will be investigated by prosecutors.

Timmaraju, who flew from her home state of Maryland for the rally, said polls show 8 out of 10 Americans support the right to abortion.

Timmaraju talked to NM Political Report about the importance of the November election in terms of abortion rights. She said the Democratic majority in the U.S. House of Representatives is “razor thin.”

“We’re neck and neck [with anti-abortion Republicans] across the country,” she said. “New Mexico is critical politically for the makeup of the country.”

“This is not a one-election fight. Our opposition took 50 years to undo Roe. Hopefully, it won’t take us as long,” she said.

Timmaraju said that if Democrats at the federal level are able to codify Roe v. Wade through congressional legislation, “states still have a lot of opportunity to whittle away at access like we’ve already seen in many states.” She pointed out that even when abortion was legal throughout the U.S. through Roe v. Wade, Texas was able to pass SB 8, which placed what many call “bounties” on anyone who helped an abortion patient in that state or provided abortion after six weeks in the state of Texas.

McGill Johnson also spoke to NM Political Report and said that New Mexico abortion clinics have seen a 550 percent increase of Texas patients this year. That does not include patients from the other 17 states that have passed bans in recent months.

“That is a tremendous amount of strain on infrastructure. It impacts residents. These bans are having the intended effect. They’re intended to cause confusion, stigma and shame,” she said.

Both McGill Johnson and Timmaraju told NM Political Report that they think the Dobbs decision has galvanized voters and that candidates’ position on abortion rights could help determine election outcomes in November.

“We’ve already seen it. We saw it in Kansas,” McGill Johnson said, referring to Kansas voters overwhelmingly voting against a constitutional amendment that would have allowed state legislators to ban abortion in that state.

Students from New Mexico State University who said they represented Students for Reproductive Rights, a group that has formed at NMSU, passed out information about a website called plancpills.org that offers reproductive healthcare and legal information. One student, Alexis Albillar, said individuals who can become pregnant have “an unsafe future” and she said she believed the abortion issue would “galvanize” young voters.

Gauge Burnett, the president of the Students for Reproductive Rights and uses he/him pronouns, said the “abortion debate has opened the door” for attacks on the LGBTQ community.

Jan Altshool, a Canadian, held up a sign that said she is the granddaughter of Carmen Freudenthal, the founder of Las Cruces Planned Parenthood.

Altshool said her grandmother and Shirley Soules started Planned Parenthood in Las Cruces in the 1950s and said “it feels like we’re going backwards.”