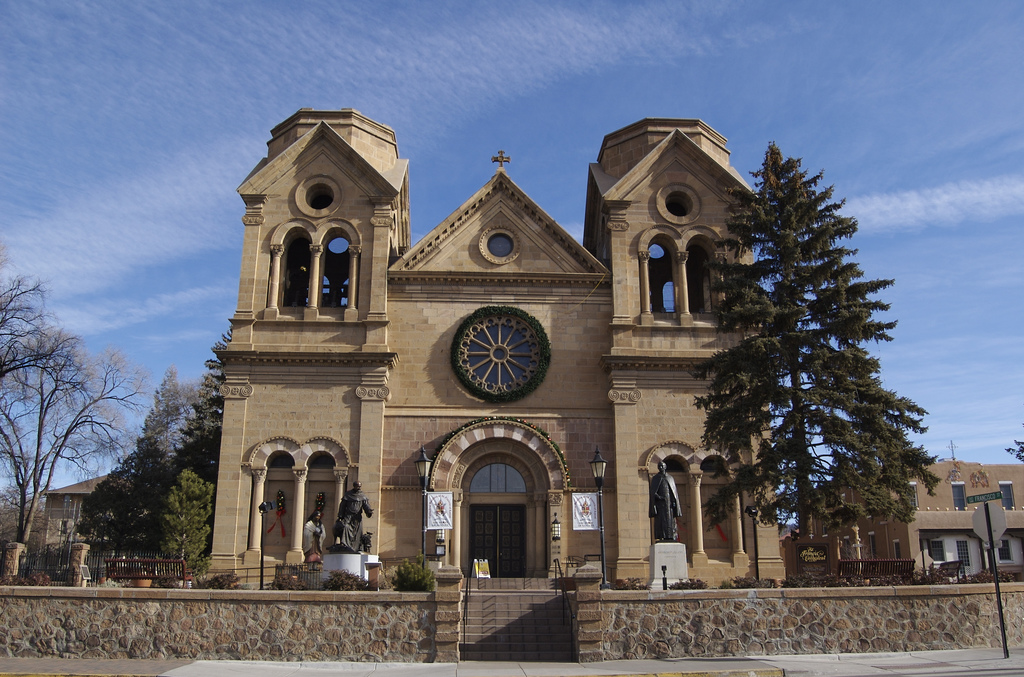 Allen Sánchez said lobbyists for other special interests often react with amazement after he stands up to speak in the Roundhouse. “One of them just told me, ‘You just got that legislator really mad!’ And I said, ‘Don’t worry. Before the day is out, he’ll call me to see if I’ll support his bill.'”

As the executive director of the New Mexico Conference of Catholic Bishops, Sánchez isn’t like other lobbyists who swarm the Roundhouse every session. For more than 400 years, emissaries of the Catholic Church have exerted influence over New Mexico’s history, culture and politics. That considerable sway has weakened in the face of demographic shifts and devastating accusations (plus costly legal settlements) over clerical sex abuse.

Meanwhile, Catholic doctrine continues to weave in and out of step with the two ruling parties’ platforms.

Sánchez said it’s important to clarify that the New Mexico Conference of Catholic Bishops isn’t just an emissary for local ranks of the faithful or a group of people who want to move items of legislation.

“It’s the official Roman Catholic Church’s voice to the Legislature,” he said. He added: “We’re here to propose, not impose.”

The proposals can be viewed by some as extreme. The 2015 legislative session has so far seen Sánchez and the state’s bishops siding with Republicans in support of enacting abortion restrictions, including a ban on procedures for women more than 20 weeks pregnant. Sánchez and the bishops also stand shoulder-to-shoulder with Democrats fighting to raise the minimum wage and keep the state law that permits allows undocumented immigrants to apply for driver’s licenses.

The tightrope act may look contradictory from the outside, but Sánchez said it represents a consistent set of theological ethics aligned with Catholic interpretation of the gospels.

“For the same reason that you don’t want a someone to abort a child is the same reason you’re funding prenatal programs and their early childhood and making sure they have medical coverage,” said Sánchez. “As teachers of the faithful, [the bishops] come here interpreting what we believe is the best outcome for the state by looking through the lens of the gospel. That’s what crosses the aisle.”

Senator William Sharer, R-Farmington, is a practicing Catholic who has found himself standing against and with the church on several controversial measures. He and Bishop Wall, who heads the Gallup diocese, were featured speakers urging lawmakers to enact parental notification requirements and a 20-week ban on abortion during the Jan. 21 Rally for Life at the Roundhouse.

Yet Sharer said he often departs from the approach of church officials, including their support of state law that permits undocumented immigrants to get driver’s licenses.

“It’s not a matter of faith,” said Sharer. “It’s not that I’m trying to make them second-class citizens or not treating them like humans. To me, it’s that there’s another path.”

He added that the driver’s license issue, like a lot of public policy, “simply becomes so political that you’re not even allowed to have a third way. And sometimes the church gets caught up in that.”

The church is made up of people just like the Legislature, said Sharer, which means disagreements are inevitable. Senate lawmakers are accustomed to that sort of give-and-take, he added. “Most of us in the Senate are actually friends. We might fight with each other over an issue, but the next bill that comes up, we may support each other.”

That same dynamic plays out in his relationship with Sánchez and the Catholic bishops, according to Sharer.

Rev. James Wall, bishop of the Roman Catholic Diocese of Gallup, addresses the Rally for Life in the Roundhouse rotunda on Jan. 21. Photo: Margaret Wright.

“When I talk to Allen Sánchez on abortion issues, obviously we’re very clear and on the same side,” Sharer said. “And when we talk about other issues, maybe we’re not on the same side, but that doesn’t mean we’re enemies.”

Senator John Arthur Smith, D-Deming, is chair of the powerful Senate Finance Committee and a conservative Democrat. He has also locked horns with Catholic leadership.

Smith said that while he holds to his own system of beliefs, his wife is a devout Catholic, his children were raised in the church, and he attends mass on a regular basis. However, none of those factors have kept him from opposing measures to raise the state minimum wage (which the church supports), nor from raising Sanchez’s ire regarding the state’s Permanent Land Grant Fund.

Sánchez cited the fact that 82 percent of all births in the state in FY 2013 were paid for by Medicaid, which provides healthcare coverage for low income people. It’s one of many indicators that New Mexico is in a state of crisis when it comes to poverty and child well-being, he said.

“At this point, the Land Grant Permanent Fund could change our direction,” said Sánchez. “But if you do nothing and take no more out of the Land Grant Fund, the pace of the need will outgrow the fund.”

Smith said he adheres to the advice of “prudent people” who recommend that no more than 5 to 5.5 percent of the fund be pulled annually for its 23 beneficiaries, including public schools, higher education, state hospitals and the state penitentiary in Santa Fe. That percentage, said Smith, protects against factors like market downturns and population growth.

While he respects the bishops’ work and intentions, Smith also said they haven’t adequately acknowledged the state’s recent increases in spending for early childhood programs.

He added that that over the course of conversations with members of the state’s Catholic leadership, “it has become empirically clear to me that that they don’t understand the mechanisms of the fund.”

Smith was upfront with the Las Cruces bishop emeritus, Rev. Ricardo Ramirez, when he visited Smith’s office to present a list of church leaders in favor of tapping the Permanent Fund for more early childhood programming. “I told him it was an impressive list, but that I didn’t consider them financial experts,” said the senator. “The bottom line is that I just want to do what is fiscally responsible.”

The importance of separation between church and state is among his firmly held beliefs, said Smith, who said it sometimes seems the Conference of Bishops crosses that line.

Sen. Sharer, for his part, said his Catholic faith plays an important role in his work as a public representative. “If my faith was so weak that I had to erase it simply by walking in this building, then I’d have no faith at all. Part of what makes us a citizen Legislature is that the people who voted for us know who we are. They sent us here to do these things.”