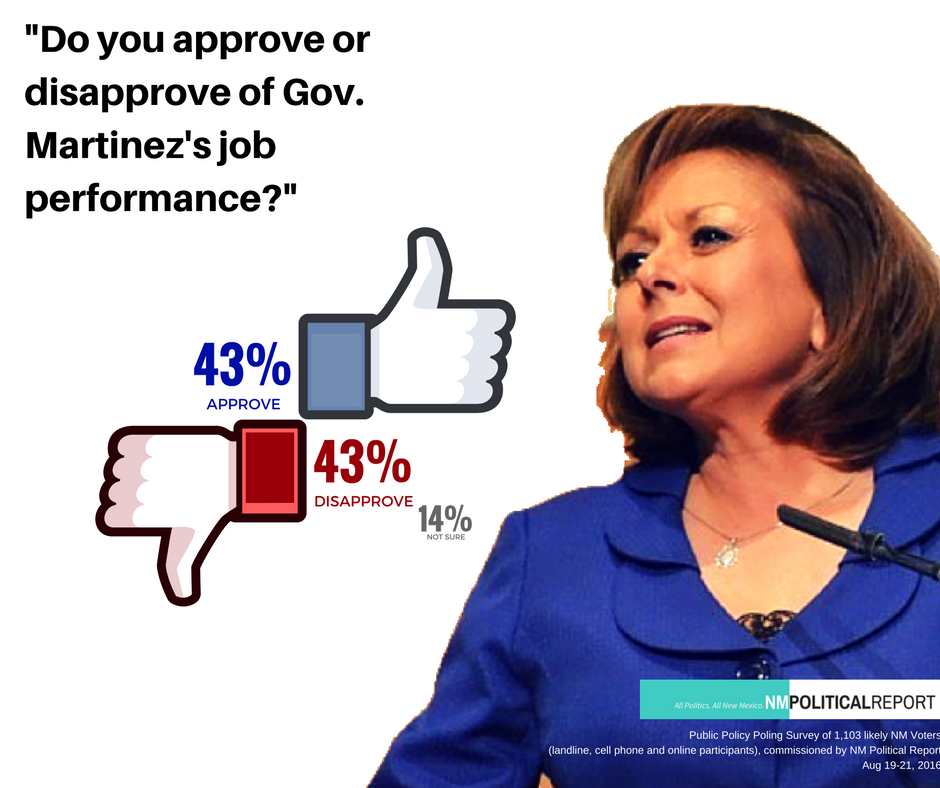 Both polls were conducted by Public Policy Polling for NM Political Report.

The latest poll shows Martinez’s lowest approval rating in a public poll since first taking office in 2011. And now just as many registered voters don’t approve of her job performance as those who approve.

But the voters who don’t know what to think of Martinez grew. In the May poll, 11 percent of registered voters surveyed on the governor’s approval rating said they didn’t know. This month, that number grew to 14 percent.

As with the previous poll, Martinez gets her highest marks from Republicans. Nearly two-thirds—63 percent—of Republicans give positive job marks to Martinez compared to 27 percent who disapprove.

Among Democrats and independents, however, more disapprove than approve of Martinez’s job performance.

Both polls looked at the approval ratings of every governor in the country as part of regular national polls.

In early 2014, a Research and Polling poll for Common Cause New Mexico pegged her approval rating at 55 percent.

Her highest approval rating in public polling appears to be a Research and Polling poll for the Albuquerque Journal in 2012 that showed Martinez with a 69 percent approval rating.

Martinez’s political team released a number of polls showing her approval rating in the 60s, most recently in 2014.

Public Policy Polling conducted the poll by surveying 80 percent of respondents by landline phone while 20 percent were conducted via internet panels, aimed a cell phone-only voters.

Friday, NM Political Report will release what voters say the Legislature should to to fix the massive budget deficit as well as full crosstabs for all questions.

Correction: This previously said 20 percent were reached via cell phone; 20 percent were conducted via internet panels of those who are cell-phone only. We regret the error.